A surge in Covid-19 cases has fomented a political crisis in Paraguay, as a week of protests at the inability of the country’s health system to cope threatens to undermine a weak government.

The prohibitive cost of treatment for coronavirus and one of the slowest vaccine rollouts in the region have aggravated simmering discontent with inequality and corruption in Paraguay, whose ruling party has been in power for most of the past seven decades.

The mostly peaceful street protests began with health workers, but have at times descended into violence as police responded with rubber bullets and tear gas. The opposition has called for President Mario Abdo Benítez to be impeached over the crisis.

The Abdo administration was credited with an effective early response to the coronavirus crisis last year, swiftly implementing a strict lockdown which helped to control the spread of the pandemic. But concerns about a new and more aggressive strain crossing Paraguay’s heavily transited eastern border with Brazil prompted an emergency to be declared on March 8.

Daily confirmed cases have reached new highs — with the rolling seven-day average doubling to over 1,600 over the past month — and intensive care units are at full capacity. Vaccines have also been slower to arrive than in almost any other country in the region. Until Chile — which is one of the global leaders in the scramble for vaccines — donated 20,000 to Paraguay last weekend from China’s Sinovac, the country had only received 4,000 vaccines, from Russia.

A number of senior officials, including the cabinet, health and education ministers, have been sacked. Anger has focused on incompetence and suspected corruption in the acquisition of medical supplies — some of which turned out to be useless and had to be thrown away. Private contractors with links to the ruling party have allegedly benefited, although investigations have been stalled.

Analysts say that just one man stands between the downfall of the president and his political survival: the former president and business tycoon Horacio Cartes, who leads a rival faction in the ruling Colorado party which is strong enough to block a vote in congress to impeach the president.

“The best and the worst thing that can happen [to Abdo] is that he is saved by Cartes,” said Magui López, a political scientist at the Paraguay social studies group at the University of Buenos Aires. “It is good because he remains president, but it is bad because he will be a puppet president . . . a cardboard cut-out.”

For Eduardo Nakayama, a historian and opposition politician, the ongoing crisis is one of the most serious in Paraguay since democracy was restored in 1989 after the fall of the 35-year military dictatorship of Alfredo Stroessner.

Nakayama argues that the current situation is worse than the one faced by Abdo in 2019 when he narrowly dodged impeachment, again thanks to calculated support from Cartes, his most powerful enemy.

Then, Abdo was impeached after signing a secret agreement with Brazilian President Jair Bolsonaro over the binational Itaipu hydroelectric dam, which was widely seen as unfavourable to Paraguay.

Now, Abdo will be even deeper in his rival’s debt. As in 2019, analysts say this is convenient for Cartes, since not only does his power grow as the president’s diminishes, but he is also likely to negotiate favours for helping Abdo.

“For Paraguay this is extremely dangerous because it confirms once again the absolute dominance of the republic’s de facto powers,” said Nakayama, explaining that the executive, legislature and judiciary have effectively been hijacked by Cartes’ faction of the Colorado party. While Cartes may have saved Abdo for now, he may yet deliver a “coup de grâce” before his term ends in 2023, he warned.

“In democratic terms, since the fall of Stroessner we have advanced very little . . . in terms of the economy and liberties, yes [we have advanced], but in terms of institutions and the fight against corruption and illegal business we have failed,” added Nakayama.

Indeed, while Paraguay’s government — and its political system more broadly — may be fragile, in economic terms, for most of this century the country’s largely agricultural economy has enjoyed robust growth that has been the envy of the region, thanks to booming demand for commodity exports like soya and beef. 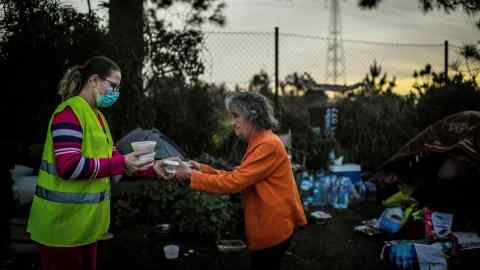 After one of the lightest recessions in the region last year — the economy shrank by just 1 per cent, compared to a 10 per cent contraction in neighbouring Argentina — Paraguay’s economy is due to grow by as much as 4 per cent this year, according to the IMF’s projections. This once again puts Paraguay in the lead in Latin America.

But Verónica Serafini Geoghegan, an economist at the Centre for the Analysis and Dissemination of the Paraguayan Economy, a non-governmental organisation, warns against indiscriminate praise for Paraguay’s “economic miracle”. Such a focus on gross domestic product growth ignores widespread poverty and inequality, she said.

“It’s a growth model sustained by informal workers [which make up two-thirds of the workforce],” she said. Geoghegan argued that Paraguay’s economic success has more to do with demand for the country’s commodities and climate conditions than sound economic policy.

“There is a large gap between macroeconomic performance measured by GDP and microeconomic results measured by workers’ income and social security . . . the trickle down effect is minimal, so many people are desperate.”