Formula One’s new chief executive has singled out the US for growth, seeking to add a second Grand Prix in the country and complete a broadcast deal, after years of struggling to make inroads into one of the world’s largest sports and media markets.

“Our intention is to move in the direction of having a more important presence . . . in the US,” Stefano Domenicali told the Financial Times ahead of the start of the new F1 season.

The Italian executive was hired last year by F1 owners Liberty Media, the US investment group controlled by billionaire John Malone, with a mandate of expanding beyond the global race car series’ strongholds of Europe and Asia.

Cracking the US is crucial to F1’s plans to recover following the pandemic. In 2020, annual revenues fell more than 40 per cent year on year to $1.1bn, resulting in an operating loss of $444m, as F1 was forced to hold a shorter season than usual at 17 races. This season, which starts in Bahrain on March 28, a record 23 races are scheduled.

Up against better-established motorsports in the US, such as Nascar and IndyCar, Domenicali insisted F1 was in position to push for bigger deals.

“[It is] a natural evolution of a journey that starts from the fact that we were — I don’t want to say zero — but very low in the US,” he said.

Liberty Media, which acquired F1 in an $8bn deal in 2016, has sought to revitalise the championship with a budget cap aimed at stopping the biggest teams — Ferrari, Mercedes and Red Bull — from outspending the competition.

That move is credited with attracting US investors. Last year, MSP Sports Capital took a minority stake in the McLaren F1 team and private equity firm Dorilton Capital bought the Williams team in a €152m deal.

But F1 has failed to achieve a long-stated goal of adding more races to its existing Grand Prix in Austin, the Texas venue where Domenicali also said he was holding talks with race promoters to renew a contract that expires this year.

He declined to give details on the progress of talks for new races in Miami and other US cities, saying only that “our target will be to have two races in the US. We’re working on that.” 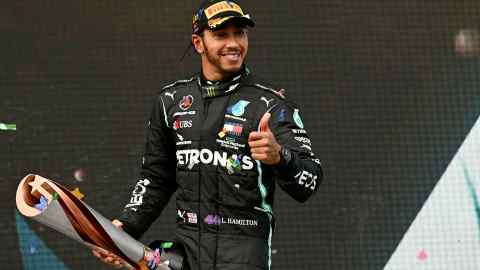 Each F1 Grand Prix attracted an average global television audience of 87m last year, down 4.5 per cent from 2019 but in line with or higher than in any of the five years before that. Despite the cancellation of the Austin GP last season, F1 said its US television audience grew 1 per cent year on year.

“The more races we have in America, the more popular this sport will become,” said Otmar Szafnauer, team principal of the Aston Martin F1 team. “It would be a lot easier if you had more races in that timezone and then I think you’d get more fans.”

The value of F1 to US broadcasters is set to be tested when its contract with ESPN, the sports TV network, ends next year. ESPN paid nothing for its existing TV contract as Liberty Media prioritised expanding audiences in the US.

Domenicali said F1 would seek a fee when the tender opens in the second half of the year. “In the future negotiation [we will see] how the market is reacting to our growth and seeing what is the situation that is in front of us,” he said.