The incoming secretary-general of the OECD is optimistic he can secure a global deal on taxing multinationals to curb a “proliferation of different unilateral measures” by countries to ensure US tech companies pay more tax.

In an interview with the Financial Times, Mathias Cormann added that the same internationalist principles should make the EU think twice before introducing unilateral tariffs to punish countries that take a different approach to global warming.

Failure in either area, the former Australian finance minister said, would undermine growth and the recovery from the coronavirus crisis.

When Cormann takes over from Angel Gurría as secretary-general of the international organisation in June, the most important item in his in-tray will be global negotiations on taxing multinationals.

An inability to strike a deal has created what OECD officials have called a “Wild West”, with countries imposing their own digital taxes that bear no relationship to international norms and threaten to spark trade wars with the US.

“It’s in the interest of relevant companies involved to be able to deal with one consistent international set of rules, rather than to have to deal with the proliferation of different unilateral measures,” Cormann told the FT.

“I’m quietly optimistic that in the end sense and sensibility will prevail.”

The Biden administration cooled transatlantic tensions this month, dropping Washington’s insistence that the participation of US companies in a global corporate tax framework should be voluntary. The move added impetus to the talks but does not guarantee success, especially with any agreement having to secure majorities in both houses of the US Congress.

Cormann, however, said he was confident a deal could be speedily secured to enable governments to collect more tax from multinational companies. The OECD proposals would also generate more revenue for the US, because they would give Washington some ability to tax foreign multinationals, including large European luxury goods companies.

Without a compromise at the OECD-led negotiations, there would probably be an expansion of various unilateral tax measures, greater inequality and slower recovery from the pandemic, Cormann warned.

Michael Devereux, professor of business taxation at Oxford university, said agreement at the OECD would “let the genie out of the bottle” and be the start of wider reforms. That would prevent the international tax system from “collaps[ing] under the weight of its own complexity and competition in tax rates”, he said.

Cormann will have the backing of the EU in seeking to drive through a tax deal, but his criticism of European plans for a carbon border levy on imports will be less welcome, reinforcing views that he is not serious about combating climate change.

“Reintroducing new trade tariffs clearly would have implications for trade and global economy at a time when we want to maximise the strength of the post-Covid recovery,” he said.

“It would be much preferable if each jurisdiction carries the appropriate burden to help achieve global net zero without having to introduce new trade tariffs.”

Brussels will in June unveil detailed plans for a carbon border adjustment mechanism, which is designed to increase the cost of imports from non-EU countries that have not signed up to the Paris climate goals or committed to net-zero emissions.

The European Commission’s proposals are being closely watched by the bloc’s trading allies.

John Kerry, US special climate envoy, has raised concerns about the EU pressing ahead with the border levy, warning that it should be a “last resort” in the global fight to bring down emissions.

Inside the EU, France is among the biggest champions of a border levy, but there is concern among smaller member states that it could spark tit-for-tat trade reprisals.

Cormann told the FT that nations should be able to pursue different approaches to meet emissions reduction targets that took into account their specific circumstances, and warned governments to be cautious of unilaterally punishing states that adopted different methods to tackling climate change. 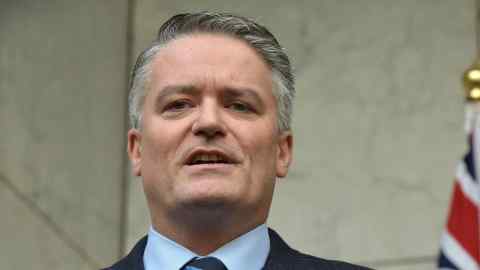 Carbon border taxes, which the EU is considering for companies that do not pay for the emissions generated in their home markets, risked damaging global growth, he said.

Australia in 2014 became the first developed country to repeal a national carbon tax, a policy that Cormann described at the time as an “act of economic self-harm”. Unlike many of its trade partners, Canberra has not committed to achieving net-zero emissions by 2050.

“The Australian government record is much better than some critics would have you believe. It has met and exceeded its international emissions reduction targets so far,” said Cormann, who denied claims he was a “climate sceptic”.

“I’m going to do everything I can to help get the best possible outcome and get to global net zero by 2050,” he said.

He said a big part of his pitch to member states was his European background — Cormann was born in Belgium before he moved to Australia in 1996 and speaks several languages — and his ability to strengthen the OECD’s focus on the Asia-Pacific region.

“It’s in Europe’s best interest for the OECD to be more focused on the Asia-Pacific,” said Coleman. “Not only is it a very important part of the world in terms of economic growth for the foreseeable future, but clearly also a lot of strategic and economic and trade policy issues apply here.”