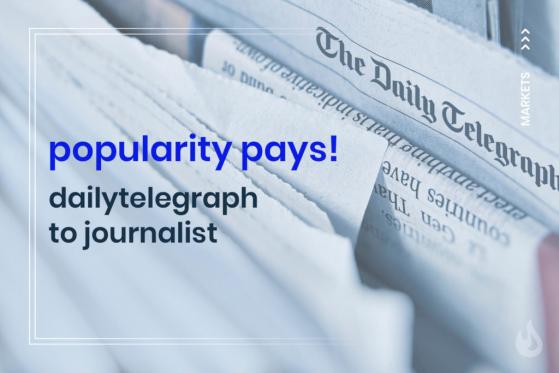 The Daily Telegraph Plans to Pay Journalists Based on Article Popularity

Plans from the Daily Telegraph to change the remuneration of journalists in accordance with article success have set off fireworks among correspondents on the news platforms.

Daily Telegraph to Pay Journalists Based on Popularity

The Daily Telegraph has proposed a “Stars” system to rank stories based on how many clicks they accrue and the number of subscriptions they drive.

Chris Evans, editor of The Daily Telegraph’s, confirmed in an email to staff that it intends to utilize the “Stars” system as means of performance related pay for its journalists.

According to Evans, the logic behind this new development is to ensure that writers who attract the most subscribers should be “the most handsomely paid”.

Journalists React to the News

Several of The Daily Telegraph’s journalists hold a contrary stance suggesting that it leaves them at the mercy of editors who may assign them to cover stories that are not as popular in mainstream public readership.

According to Michelle Stanistreet, the general secretary of the National Union of Journalists, this development would “massively demoralize journalists” and it shows a flagrant disregard for the importance of quality, diverse journalism.

In defence, Evans argued that the “Stars” system would not impede the earning capacity of journalists but rather, is an attempt to identify and quantify the sort of journalism that readers like.

Blockchain, although in its infancy, may have the power to flip the status quo for the journalism industry by ensuring journalists receive fair pay for their work and readers have access to accurate, unbiased news.

Blockchain may provide an intuitive, seamless solution for journalists and, if embraced, the industry will be poised perfectly to reap the rewards of Blockchain.

Blockchain technology could be deployed to reward reporters on the basis of how good the article is (Narrative, for example, deems an article as “good” based on the feedback of its token holders) instead of merely operating with clicks which can encourage ‘clickbaiting’ to cheat the system.

Blockchain platforms like Narrative, Voice, Publish0x, and Steemit, are already heralding changes in the sector. Narrative allows content creators to be remunerated fairly for their work. The decentralization of Blockchain allows creators of Narrative to earn money based on the quality of their work as decided by voting from holders of the token.

Blockchain can also be used to fund adventurous and risk-taking reporters who break real world stories such as front-line war correspondents and teams of investigative journalists. Through Blockchain, media houses can permanently maintain their servers and safeguard their archives for future references.

Blockchain can help rebuild the dwindling trust the public has for news publishing houses by allowing readers themselves to influence the direction of publications in the same manner as shareholders vote on pertinent issues relating to a company.

The Coziest Rental Apartment in Chicago

How Bicyclists Can Get In Shape