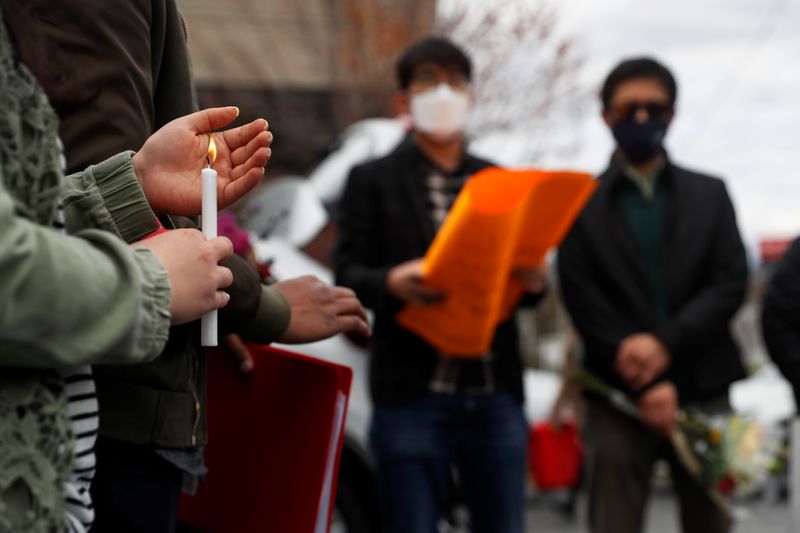 By Nathan Layne and Andy Sullivan

(Reuters) – The killings of six women of Asian descent in Georgia this week have prompted fresh calls to pass hate crime laws in the handful of states without them and for law enforcement elsewhere to invoke protections already in place.

U.S. hate crime laws vary widely by state, and prosecutors do not always use them. But experts say such laws – which establish tougher penalties for crimes that are motivated by racial, gender or other types of hatred – offer important protections.

“Having a hate-crime law tells victims of hate crimes that ‘you matter and we’ll take it seriously if somebody hurts you,'” said Northeastern University criminology professor Jack McDevitt.

Authorities in Georgia have yet to determine what drove 21-year-old Robert Aaron Long to kill six Asian-American women and two others on Tuesday. Long, a white man, told investigators that a sex addiction led him to violence, but lawmakers and anti-racism advocates have said they believe the killings were at least in part motivated by anti-Asian sentiments.

Meeting with Asian-American leaders in Georgia on Friday, President Joe Biden called on Congress to pass legislation that would bolster the federal government’s response to hate crimes, and improve state and local reporting.

Only three U.S. states – South Carolina, Arkansas and Wyoming – have no hate crime laws. A key backer of a pending bill in Arkansas said the Georgia shooting raised the prospects of getting the measures passed.

It “makes no sense morally to not send that message that you can’t target people,” said Jim Hendren, a Republican-turned-independent state senator in Arkansas who hopes to get hate crime legislation approved there next month.

In South Carolina, legislation named after the pastor of a church where a white man killed nine Black churchgoers in 2015 has drawn support from companies that have been vocal about the competitive disadvantage without such a law.

“No one wants to be the last state standing without a hate crime law,” said Swati Patel, interim CEO of the South Carolina Chamber of Commerce.

That last state might be Wyoming, where a hate crime bill stalled in the legislature last week. State Representative Pat Sweeney, a Republican, says he hopes it will pass next year. “We’ve got to do it in a manner that will appease the right wingers and I think we can get there,” he said. “I would have loved to see us move things — the shootings in Georgia were just awful.”

The state laws are unevenly applied and offer varying protections, however. California’s hate crime laws cover crimes motivated by a victim’s gender identity, age, sexual orientation and political affiliation. Alabama’s laws do not cover any of those categories.

Some experts say authorities too often choose not to apply them because it can be more difficult to establish a criminal’s motive than to simply prosecute them for the crime itself.

In 2019, 86% of law enforcement agencies either affirmatively reported no hate crimes, or did not report any such data to the FBI at all, according to Scott McCoy, interim deputy legal director for the Southern Poverty Law Center.

Some people think the laws need to be expanded to protect other victims, such as homeless people.

“We’re seeing more types of people getting attacked, and some of them are not covered by hate crime laws,” said Brian Levin, director of the Center for the Study of Hate and Extremism at California State University, San Bernardino.

A report by the center found that hate crimes against Asian Americans in 16 major U.S. cities rose by 149% from 2019 to 2020, a period when overall hate crimes dropped 7%.

Seizing an opening, some North Carolina state senators are preparing to resubmit the “Hate Crimes Prevention Act” for a third time after attempts fizzled in 2018 and 2019.

The bill would expand the scope of hate crimes to include ethnicity, gender identity and sexual orientation, while also funding the creation of a hate crimes database and training for law enforcement.

“The reintroduction of this bill has garnered more attention than ever before,” he said.