The Suez Canal has been blocked after one of the world’s largest container ships ran aground, severing a vital trade artery and delaying shipments of goods and commodities.

The Ever Given container ship, which is almost as long as the Empire State Building is tall, was shown on ship tracking satellite services on Tuesday morning to have wedged itself horizontally across the southern end of the canal, with tug boats engaged in a frantic effort to free it.

It was unclear what caused the Ever Given to run aground. But the blockage has caused a rapid build-up of ships behind the vessel. The container ship is operated by Evergreen Marine, which is based in Taiwan.

Every day, about 50 vessels sail through the 120-mile length of the Suez Canal, which was built between 1859 and 1869 to connect the Mediterranean to the Red Sea and Asia.

Samir Madani at TankerTrackers said that within hours of the blockage, about 10m barrels of crude and petroleum product shipments had backed up near the north and south entrances to the canals.

Apart from crude flowing from the Middle East to markets in Europe and North America, the canal has become a large transit route for oil flowing from Russia to Asia in recent years.

“The canal is a key chokepoint for global trade” Madani said. “If they can free the vessel quickly then the impact will be minimised but any prolonged blockage would have severe consequences, from affecting oil prices and shipping rates to forcing container vessels to take the much longer route around Africa.” 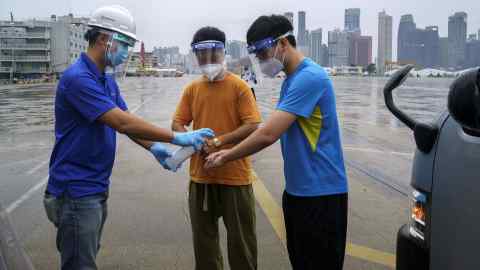 Total oil flows through the canal and its associated Sumed pipeline system accounted for almost 10 per cent of global seaborne traded petroleum in 2018, according to the US Energy Information Administration. About 8 per cent of liquefied natural gas trade also passed through the canal that year, the EIA said.

The Panama-flagged Ever Given vessel, which was launched in 2018, is just under 400m long and 59m wide and was en route to Rotterdam, according to the Marine Traffic vessel tracking website.

Calls to the Suez Canal Authority in Egypt went unanswered outside of normal business hours on Tuesday.

A picture of the vessel posted on Instagram by a seafarer reportedly in the ship behind the Ever Given showed the fully laden vessel blocking the entire canal. A digger on the eastern bank of the canal was pictured attempting to dig the ship free.

Julianne Cona, who posted the picture, is listed on LinkedIn as a second assistant engineer from New York.

“Ship in front of us ran aground while going through the canal and is now stuck sideways,” Cona wrote. “Looks like we might be here for a little bit . . . ”