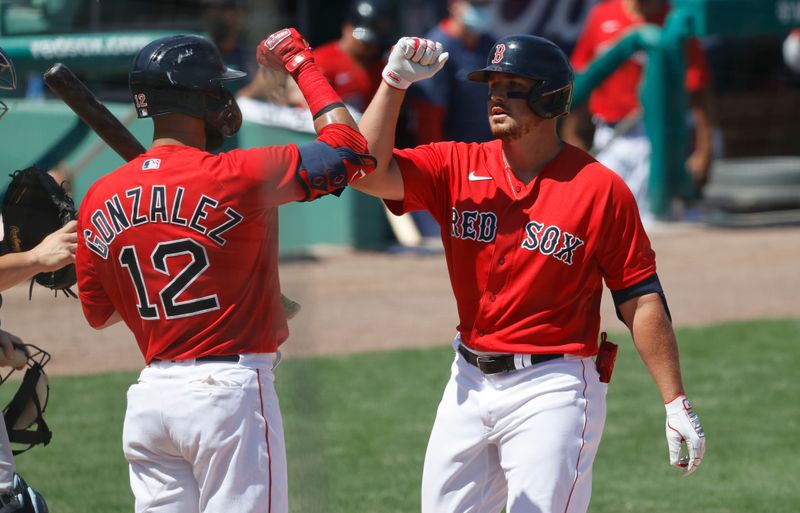 Jarren Duran went 4-for-5 with three RBIs and Hunter Renfroe, Michael Chavis and Chris Herrmann each smacked homers as the Boston Red Sox rallied from a five-run deficit for an 11-7 win over the Tampa Bay Rays on Friday in Fort Myers, Fla.

While seven different Red Sox players had at least an RBI to highlight a 13-hit attack, Boston starting pitcher Nathan Eovaldi struggled mightily, allowing five runs on eight hits to go along with five strikeouts and a walk in four innings.

Sam Hilliard hit a two-run homer and Renato Nunez added a solo shot to lead Colorado over Cleveland in Scottsdale, Ariz. Roberto Perez went 2-for-2 with a home run and two runs for the Indians.

Anthony Rizzo went 3-for-3 with two RBIs, Willson Contreras hit a solo homer and Ian Happ added a three-run double to power Chicago to a win over Oakland in Mesa, Ariz. Chad Pinder had two of Oakland’s six hits.

Vladimir Guerrero Jr. went 3-for-3, Jonathan Davis went 2-for-4 with two runs and Toronto hit three homers in a win over Detroit at Lakeland, Fla. JaCoby Jones went 2-for-3 with a home run for the Tigers, who mustered just four hits and struck out 14 times.

Carlos Santana hit a two-run double and a solo home run, and Bubba Starling’s run-scoring single in the eighth inning lifted Kansas City to a tie against Los Angeles in Surprise, Ariz. Scott Schebler went 2-for-2 with a three-run home run and two runs for the Angels, who also got a run-scoring double from Jo Adell.

Max Muncy went 3-for-3 with an RBI and two runs and Edwin Rios went 2-for-2 with two RBIs to lead Los Angeles over Texas in Phoenix. Ronald Guzman and Sherten Apostel each hit a solo home run to account for the Rangers’ scoring.

Billy McKinney hit two home runs, including a three-run shot that highlighted a seven-run eighth inning as Milwaukee rallied for a win over Arizona in Phoenix. Christian Walker went 2-for-4 with a three-run home run for the Diamondbacks.