The Wildlife Photographer of the Year competition, founded in 1965, is an annual international showcase of the best nature photography. This year, the contest attracted more than 50,000 entries from 95 countries. Wildlife Photographer of the Year is developed and produced by the Natural History Museum, London. The owners and sponsors have once more been kind enough to share the following winning images from this year’s competition. The museum’s website has images from previous years and more information about the current contest and exhibition. Captions are provided by the photographers and WPY organizers and are lightly edited for style.

Head to head. Winner, Behavior: Mammals. Photographer Stefano Unterthiner watches two Svalbard reindeer battle for control of a harem. Unterthiner followed these reindeer during the rutting season. Watching the fight, he felt immersed in “the smell, the noise, the fatigue, and the pain.” The reindeer clashed antlers until the dominant male (left) chased its rival away, securing the opportunity to breed. 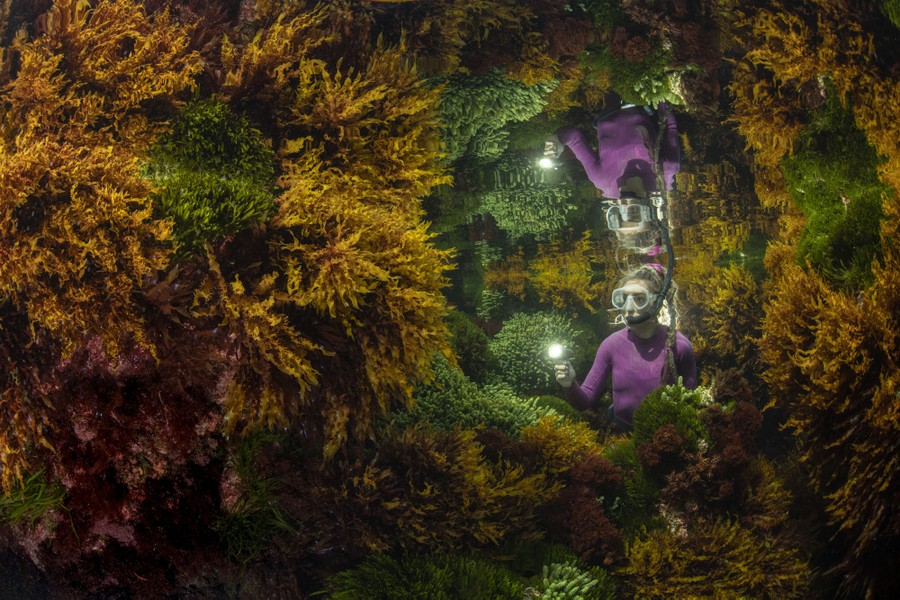 Rich reflections. Winner, Plants, and Fungi. Justin Gilligan creates the reflection of a marine ranger among the seaweed. At the world’s southernmost tropical reef, Gilligan wanted to show how careful human management helps preserve this vibrant seaweed jungle. With only a 40-minute window where tide conditions were right, it took three days of trial and error before Gilligan got his image. 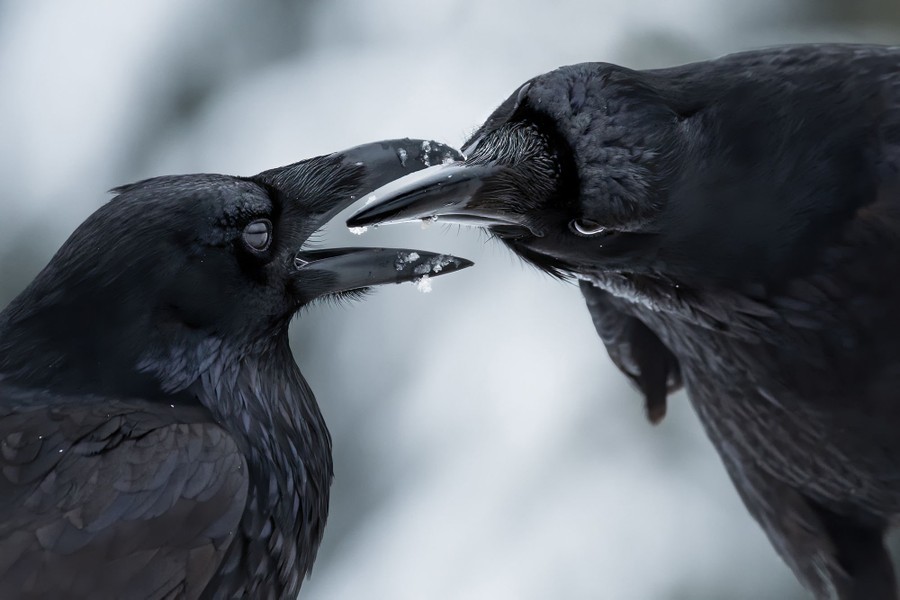 The intimate touch. Winner, Behavior: Birds. Shane Kalyn watches a raven courtship display. It was midwinter, the start of the ravens’ breeding season. Kalyn lay on the frozen ground using the muted light to capture the detail of the ravens’ iridescent plumage against the contrasting snow to reveal this intimate moment when their thick black bills came together. 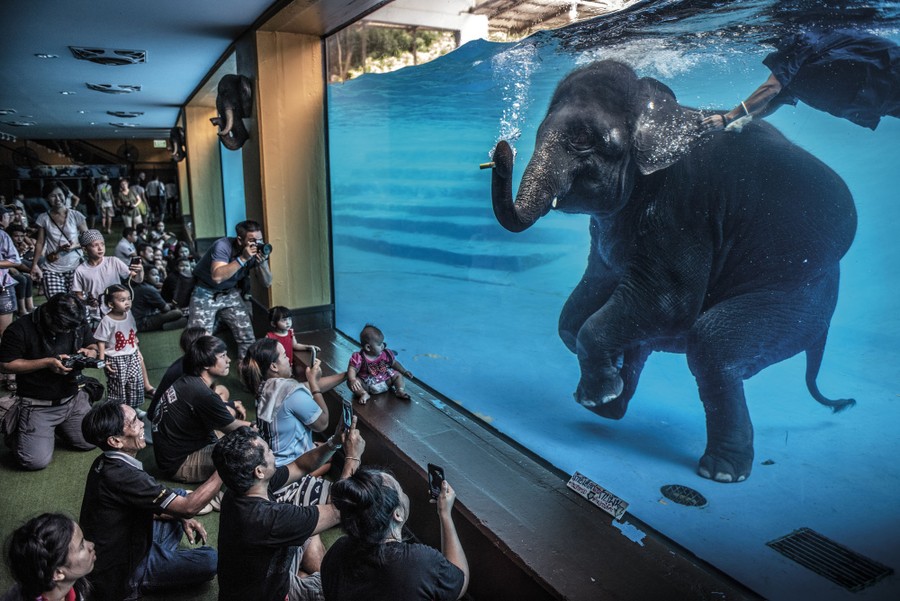 Elephant in the room. Winner, Photojournalism. Adam Oswell draws attention to zoo visitors watching a young elephant perform underwater. Although this performance was promoted as educational and as an exercise for the elephants, Adam was disturbed by this scene. Organizations concerned with the welfare of captive elephants view performances like these as exploitative because they encourage unnatural behavior. Elephant tourism has increased across Asia. In Thailand, there are now more elephants in captivity than in the wild. The COVID-19 pandemic caused international tourism to collapse, leading to elephant sanctuaries becoming overwhelmed with animals that can no longer be looked after by their owners. 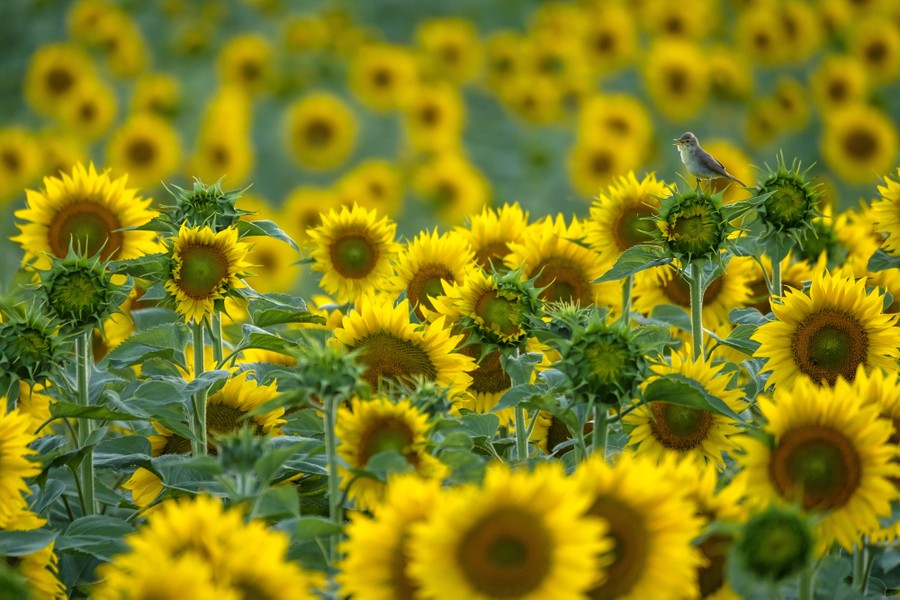 Sunflower songbird. Winner, 11–14 Years. Andrés Luis Dominguez Blanco enjoys the splendor of the sunflowers and a melodious warbler singing its heart out. As the light faded at the end of a warm May afternoon, Andrés’s attention was drawn to a warbler flitting from flower to flower. From his hide in his father’s car, Andrés photographed the singer, “the king of its territory.” 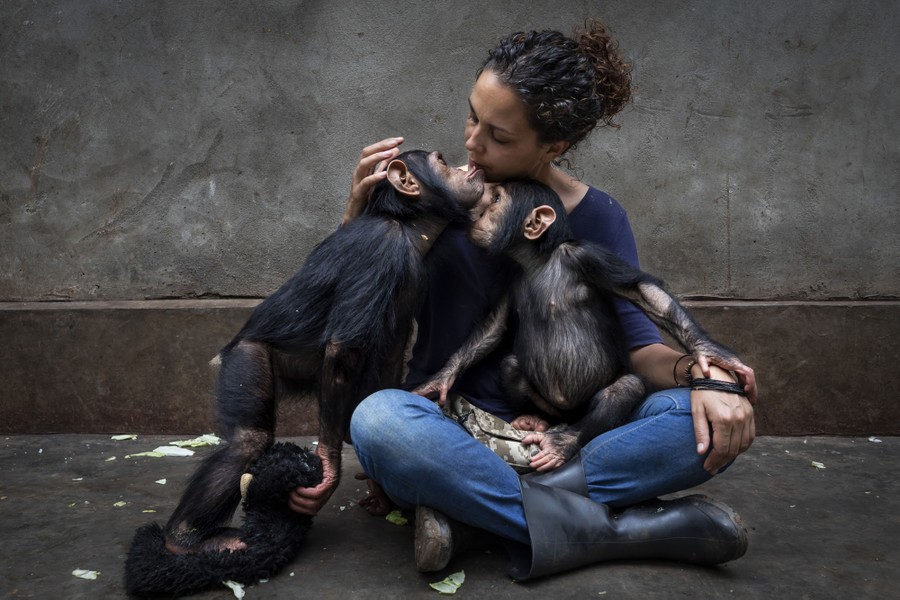 The healing touch, from community care. Winner, Photojournalist Story Award. Brent Stirton profiles a rehabilitation center caring for chimpanzees orphaned by the bushmeat trade. The director of the center sits with a newly rescued chimp as she slowly introduces it to the others. Young chimps are given one-to-one care to ease their psychological and physical trauma. These chimps are lucky. Less than one in ten are rescued after having seen the adults in their group killed for meat. Most have experienced starvation and suffering. 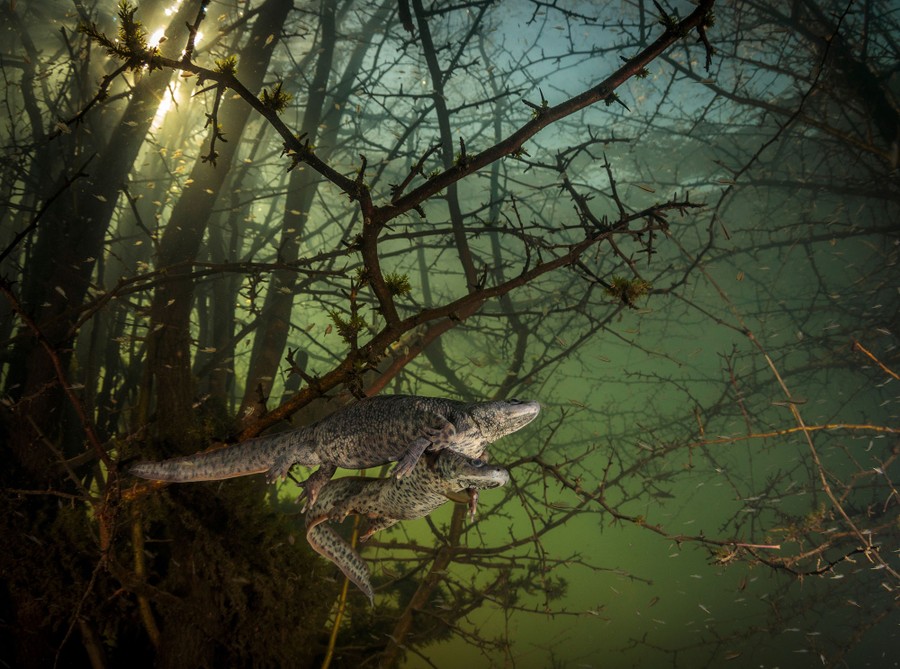 Where the giant newts breed. Winner, Behavior: Amphibians and Reptile. João Rodrigues is surprised by a pair of courting sharp-ribbed salamanders in the flooded forest. It was João’s first chance in five years to dive in this lake, as it emerges only in winters with exceptionally heavy rainfall when underground rivers overflow. He had a split second to adjust his camera settings before the newts swam away. 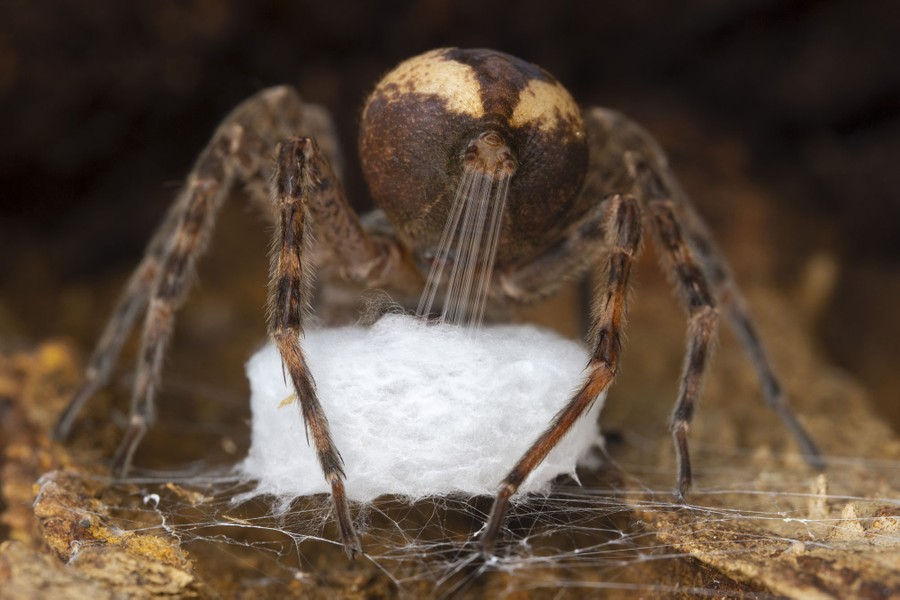 Spinning the cradle. Winner, Behavior: Invertebrates. Gil Wizen finds a fishing spider stretching out silk from its spinnerets to weave into its egg sac. Wizen discovered this spider under loose bark. Any disturbance might have caused the spider to abandon its project, so he took great care. “The action of the spinnerets reminded me of the movement of human fingers when weaving,” Wizen said. 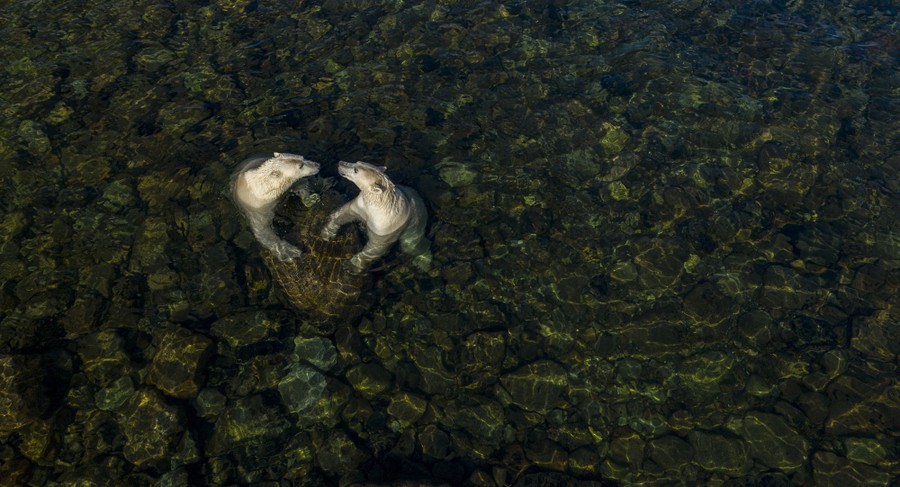 Cool time, from land time for sea bears. Winner, Rising Star Portfolio Award. Martin Gregus shows polar bears in a different light as they come ashore in summer. On a hot summer’s day, two female polar bears took to the shallow intertidal waters to cool off and play. Gregus used a drone to capture this moment. For him, the heart shape symbolizes the apparent sibling affection between them and “the love we as people owe to the natural world.” 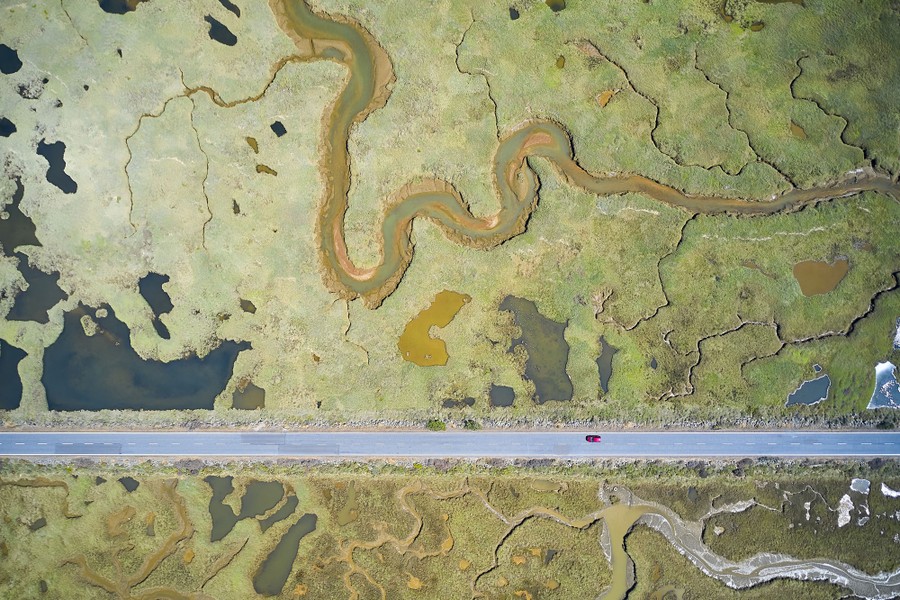 Road to ruin. Winner, Wetlands—The Bigger Picture. Javier Lafuente shows the stark, straight line of a road slicing through the curves of a wetland landscape. By maneuvering his drone and inclining the camera, Javier dealt with the challenges of sunlight reflected by the water and ever-changing light conditions. He captured the pools as flat colors, varying according to the vegetation and mineral content. Dividing the wetland in two, this road was constructed in the 1980s to provide access to a beach. The tidal wetland is home to more than 100 species of birds, with ospreys and bee-eaters among many migratory visitors. 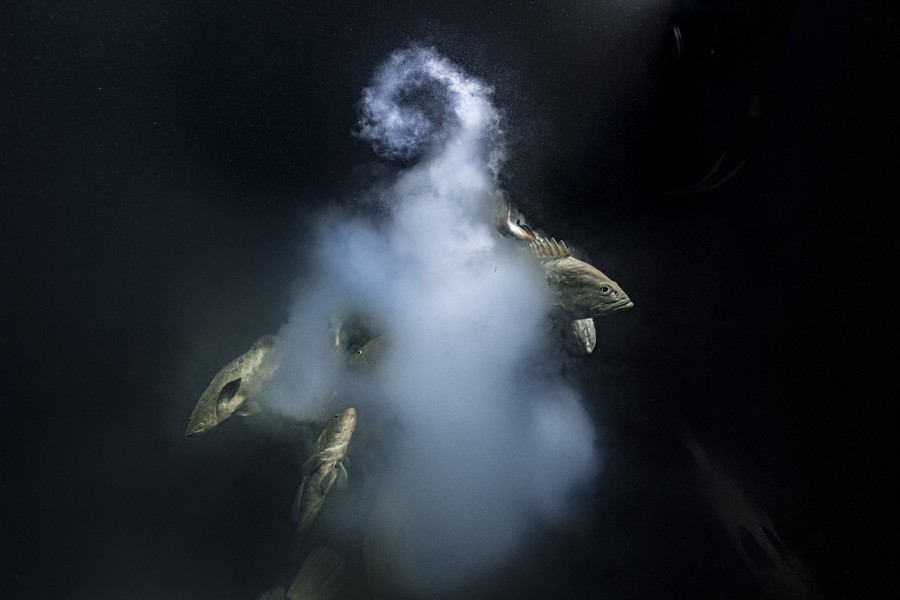 Creation. Winner, Underwater. Laurent Ballesta peers into the depths as a trio of camouflage groupers exit their milky cloud of eggs and sperm. For five years Ballesta and his team returned to this lagoon, diving day and night to see the annual spawning of camouflage groupers. They were joined after dark by reef sharks hunting the fish. Spawning happens around the full moon in July, when up to 20,000 fish gather in Fakarava in a narrow southern channel linking the lagoon with the ocean. Overfishing threatens this species, but here the fish are protected within a biosphere reserve. 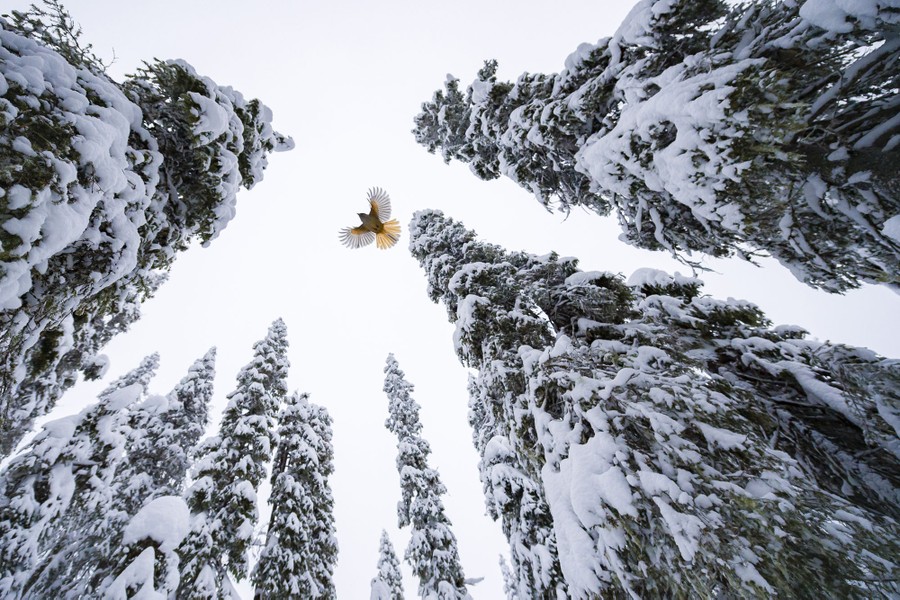 High-flying jay. Winner, 15–17 Years. Lasse Kurkela watches a Siberian jay fly to the top of a spruce tree to stash its food. Lasse wanted to give a sense of scale in his photograph of the Siberian jay, tiny amid the old-growth spruce-dominated forest. He used pieces of cheese to get the jays accustomed to his remotely controlled camera and to encourage them along a particular flight path.

News: The Ranks of Dream Interpreters