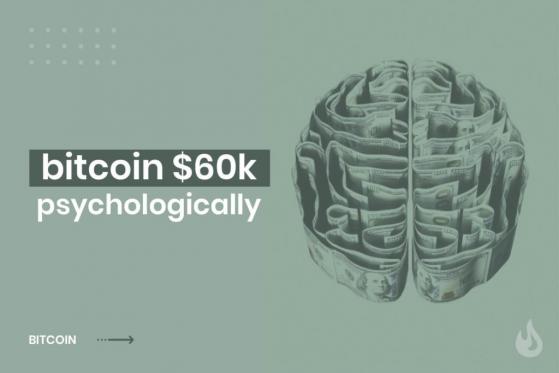 $60K Bitcoin: What is Its Psychological Impact to the Market

This weekend , the digital gold of our era, reached a new all-time high (ATH) of $61,556 and broke a psychological barrier. The data confirms what many had expected, retail and institutional investors have strengthened Bitcoin’s value in the long run, pushing the cryptocurrency to new heights.

Bitcoin crossed the resistance level of $60,000 for the first time on Saturday after a month of price correction and a long price consolidation period. It battled to remain above the new resistance level and reached its fourth new ATH of 2021, with a 5% increase on Saturday.

Bitcoin’s ATH momentum was temporary. A massive pullback on Monday saw the cryptocurrency fall back to $54,588. It subsequently rebounded to $56,689 but still failed to surpass its previous resistance of $58,000. Despite this, Bitcoin still holds over a trillion-dollar market valuation and enjoys a 61.3% market dominance at the time of writing.

Justin Barlow, research analyst at digital asset data provider The TIE, suggested that the fall in price was due to investors taking profits, with over 18,000 BTC being moved to a hot wallet on the Gemini exchange. According to crypto investor Lark Davis, institutional investors with over 1,000 BTC are taking profits, which is a regular occurrence.

This doesn’t mean the bull run is over. However, it indicates that the $60,000 threshold is not yet sustainable, given low interest from institutional investors, as highlighted by New Zealand-based analysts who tweet @CryptoQuantum.

Confidence in the Crypto Market

Breaking the $60,000 barrier with little resistance and a typical retrace in price gives Bitcoin hope, as bulls in the market set their sights on a new ATH. First, however, there will be another consolidation period and sideways trading until the Coinbase listing. With US residents due for a new $1,400,stimulus check, speculation is rampant that more retail money will go into cryptocurrencies before institutional investors try to push Bitcoin again.

According to the Fear & Greed Index, market sentiment still ranks high toward extreme greed with a score of 76. Analysts and industry leaders, such as Mark Cuban, have highlighted Bitcoin’s volatility, but institutional investors have still reinforced its place in the market as new BTC or ETH investments increase market capitalization US-based business intelligence firm MicroStrategy’s CEO announced the purchase of another 262 BTC, with a market value of $15 million, aw well as other currencies witnessing an ATH, while other international entities such as Norway’s Aker ASA have created a new fund to support investment in Bitcoin projects.

How Is the Market Reacting Now?

The pullback that occurred on Monday after Bitcoin’s ATH seems to have coincided with a report suggesting that owning or trading cryptocurrencies in India might be made illegal. However, confidence in the market remains high as US banking giant JPMorgan (NYSE:) offers new means of investing in Bitcoin. Also, PayPal is planning to expand its cryptocurrency integration by acquiring Curv, an Israeli entity, to increase cryptocurrency adoption.

Bitcoin will remain a strong asset for investors as its value is reinforced by the conglomerate of institutions buying into it. The price surge over the weekend indicated that predictions made during the 2021 bull run might very well come true as Bitcoin hits new milestones each month. This only reinforces the overall belief of both crypto enthusiasts and institutional investors that the juggernaut cryptocurrency can reach new highs in due time. As Bitcoin battles between resistance and heights, investors are becoming more convinced of its store of value in the new digital era.