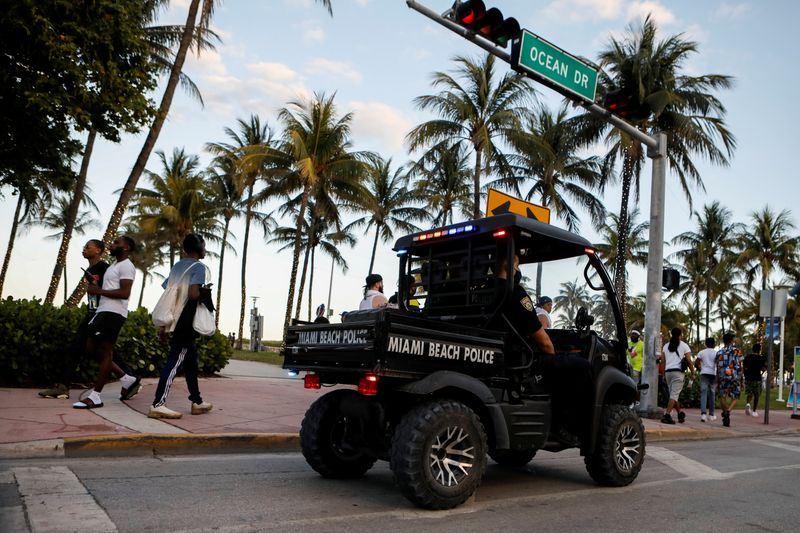 By Francisco Alvarado and Rich McKay

Even so, Rivero sees the early closure as necessary to keep residents, tourists and workers safe in one of America’s top party destinations amid coronavirus concerns.

“There’s been multiple shootings on multiple nights, gang fights, stabbings and a dead body in the middle of the intersection,” the 55-year-old Rivero said.

Miami Beach business owners interviewed by Reuters voiced a mix of disappointment and resignation over the crackdown.

The 8 p.m.-to-5 a.m. nightly curfew in a “high impact zone” within the South Beach neighborhood has cut deeply into the revenues of restaurants, bars and other establishments still struggling to recover from pandemic-related financial losses.

“It has been increasingly bad every year,” Rivero said. “It’s unfortunate. Calling it quits is not under consideration, but it has been a thought in our heads.”

Jonathan Plutzik, owner of the Betsy Hotel South Beach on 14th Street and Ocean Drive, said his 130-room inn was operating near full capacity and he expected it to remain so well into May, with the cheapest rooms going for $449 a night.

“In 2020, no one had any expectations we would be as busy as we are now,” Plutzik told Reuters. “That is both a blessing and a challenge.”

“Our city leadership, including law enforcement, doubled down to get ready for spring break. Clearly it wasn’t enough, so the city imposed some stricter rules, like the 8 p.m. curfew, which I am deeply supportive of,” he said.

Miami Beach, perched on a string of coastal islands across Biscayne Bay from Miami proper, abruptly shut down spring break early last March as the pandemic hit, ordering bars and restaurants closed while outlawing social gatherings of more than 10 people.

Mayor Dan Gelber has said all manner of out-of-town visitors swarmed back into Miami Beach after Florida Governor Ron DeSantis on Feb. 26 lifted coronavirus restrictions, declaring the state an “oasis of freedom.”

“If people want to come to a hard-charging beach party, we aren’t the place,” Gelber told Reuters on Tuesday. “We’re definitely pulling up the welcome mat for that. We made over 1,000 arrests the other day. I certainly hope that sends the message.”

Of those arrested, according to Gelber, only 10% were students, and about half were from out of state.

“By and large, these were not your college students taking a break before final exams,” he said.

Surrounding jurisdictions and the state highway patrol have sent reinforcements while the curfew remains in effect over the next three weeks, Gelber said, adding he would consider lifting it sooner if the situation calms down.

In the meantime, South Florida’s annual winter and springtime influx of visitors is a key component of the region’s tourist and leisure industry.

“In some cases, the profits you make during January, February and March will help carry you through the slow season in the summer,” said Juan Tejeiro, 29, an entrepreneur who owns a bike and jet ski rental shop on 9th Street and Washington Avenue.

The curfew does not directly affect his business because he normally closes around 7 p.m., and he is glad for the restrictions.

“I’ve been worried someone will break and smash by windows at night,” Tejeiro said. “I also had a customer who got one of my bicycles stolen from him last week.”