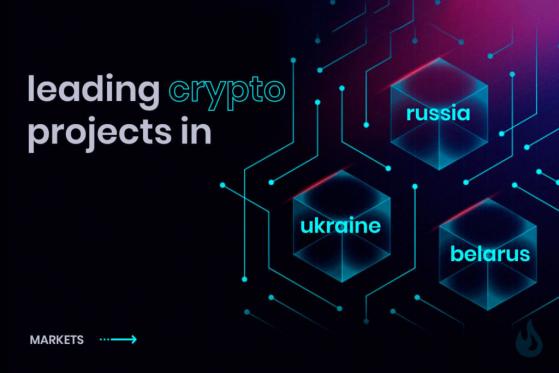 Eastern Europe is not dragging its feet when it comes to the adoption of cryptocurrencies. It is among the regions that are showing the most progress in the application of digital currencies.

Russia, Belarus, and Ukraine are the trailblazers in the region, spawning new crypto projects that are innovative and revolutionary and have the potential to change the financial and technological landscape of the world.

In recent years, the country has become a bastion of cryptocurrency development in the region. President Alexander Lukashenko recently signed a decree that legalized cryptocurrencies and ICOs, making them tax-free for an extended period of five years.

As a result of its progressive stance on cryptos, Belarus has been consistently ranked among the top ten most crypto-friendly states in the world.

ASB Belarusbank, the largest bank in the country, has announced a partnership with Whitebird LLC to float a cryptocurrency exchange.

This project sought to allow customers of the bank to purchase and sell cryptos using Visa (NYSE:) cards. It also gives them the option of exchanging digital assets for fiat currencies like the US dollar, euro, and the Belarusian and Russian rubles.

Ukraine has taken positive steps to incorporate cryptocurrencies as part of its effort to diversify its economy. In furtherance of this, the Ukrainian government announced the establishment of an $18 million fund to aid innovative crypto and blockchain startups in the country.

Eligible Ukrainian crypto companies received up to $75,000 in grants from the government through the project, which had the full support of Prime Minister Oleksiy Honcharuk.

In another development, Stellar has announced that it has entered a lucrative partnership with Ukraine’s Ministry of Digital Transformation to float a central bank digital currency (CBDC) and a virtual asset infrastructure.

Stellar Development Foundation’s CEO, Denelle Dixon, said the partnership seeks to digitize the Ukrainian hryvnia. The National Bank of Ukraine noted that the project will utilize a private version of the Stellar blockchain.

Russia has had a long, tumultuous relationship with cryptocurrencies and the underlining blockchain technology. President Vladimir Putin has in the past criticized cryptos, even sanctioning a crackdown, while top bankers in the country have referred to them as a pyramid scheme.

These comments failed to dampen the enthusiasm of developers and entrepreneurs, who have been inspired by the immense potential of digital tokens.

However, following the rise in the adoption of blockchain, Putin revisited his stance, meeting with Vitalik Buterin, the founder of , to chart a new course for the country’s financial future. In 2020, Russia experimented with blockchain technology for remote voting in its parliamentary elections.

Russian communication giant Rostelecom and the Department of Information Technologies were in charge of overseeing the elections to fill the vacant seats at the Russian Parliament.

The blockchain system utilized was based on the enterprise variant of the Waves blockchain and has the benefits of increased levels of fairness and accountability.

Golos is another Russian-based project that is hard to ignore. Golos was developed to allow users to rate a post using tokens instead of mere likes. That is an incentive for content creators to create high-quality content because the tokens possess real value.