EU divisions over vaccine distribution were laid bare at a summit on Thursday as governments failed to agree on how to provide additional jabs to member states in need of emergency supplies.

Leaders clashed during a marathon videoconference which ended with no resolution to demands from predominantly poorer eastern member states for part of 10m in additional BioNTech/Pfizer vaccines.

Tense and sometimes ill-tempered discussions broke down after demands from Austria’s chancellor Sebastian Kurz for additional vaccine supplies for Vienna were rejected by leaders including Germany’s Angela Merkel.

Kurz was leading efforts to ensure that Austria is part of a group of EU countries given extra doses after being affected by AstraZeneca’s delivery shortfalls. But his demands to hand out a majority of the jabs between Austria, the Czech Republic and Croatia were rebuffed by leaders who questioned Vienna’s need over more stricken countries in eastern Europe that are trailing the rest of the bloc.

Mark Rutte, Dutch prime minister, said Austria’s vaccine rollout was “not in bad shape” and the bloc had to consider giving priority to Bulgaria, Croatia, and Latvia. These three countries have consistently lagged the EU’s average vaccination rate after they weighted their buys towards AstraZeneca jabs that have been beset by supply delays. 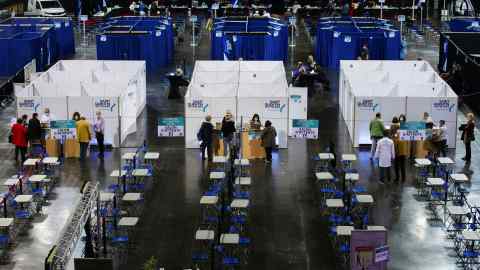 EU officials have spent the past week at loggerheads over how to distribute a portion of the 10m Pfizer jab deliveries brought forward from the third quarter.

Hopes of an agreement vanished after Kurz said Vienna would veto any distribution deal that did not include an enhanced share for Austria.

Merkel expressed frustration at Austrian criticism of the EU rules, according to people briefed in the matter. She told the summit that vaccine contracts were “signed by member states and it was not by some stupid bureaucrats”.

While all EU countries have the right to pro-rata population-based shares of every vaccine bought by the European Commission, they can opt to take less of each jab if they wish. Any unused shares can then be purchased by other member states.

The dispute underscored growing disunity within the EU over the vaccine rollout as leaders also debated tighter export curbs and heard an address from US President Joe Biden. Many EU countries are struggling to contain new cases of the virus, with Belgium and France being forced into fresh lockdown measures this week.

This week the commission proposed toughening the EU’s discretionary export controls as it seeks to push beneficiary countries, notably the UK, to share their own production.

The EU has exported 77m vaccines to more than 40 middle- and high-income countries since December 1, according to commission figures published on Thursday — almost as many as the 88m delivered within the bloc. About 21m doses have gone to the UK, EU officials said, including about 1m AstraZeneca jabs that were sent before the EU export regime came into force in late January.

French president Emmanuel Macron said after the summit: “Europe is not a selfish continent. When I read the British press we hear that the EU is selfish. That’s false.”

The 1m AstraZeneca doses would not have materially closed the gap between the inoculation drives of the EU and the UK, which has vaccinated 3.4 times as many people per capita, according to data gathered by the Financial Times. But the shipments to Britain stoked a dispute between London and EU capitals, which are angry that no exports have come from the UK in return.

Talks are continuing between London and Brussels over Britain’s claims that it is entitled to millions of AstraZeneca doses made at a Netherlands plant.

Matt Hancock, UK health secretary, argued this week that the British government took priority because the EU had a “‘best efforts’ contract and we have an exclusivity deal”.

But EU officials point out that the British contract with AstraZeneca uses the same “best reasonable efforts” language to define the company’s delivery responsibilities.

They also say AstraZeneca should have sent production to the EU from UK factories, which are mentioned in the company’s deal with the commission as sources of supply.

The Best FPS Campaigns of All Time