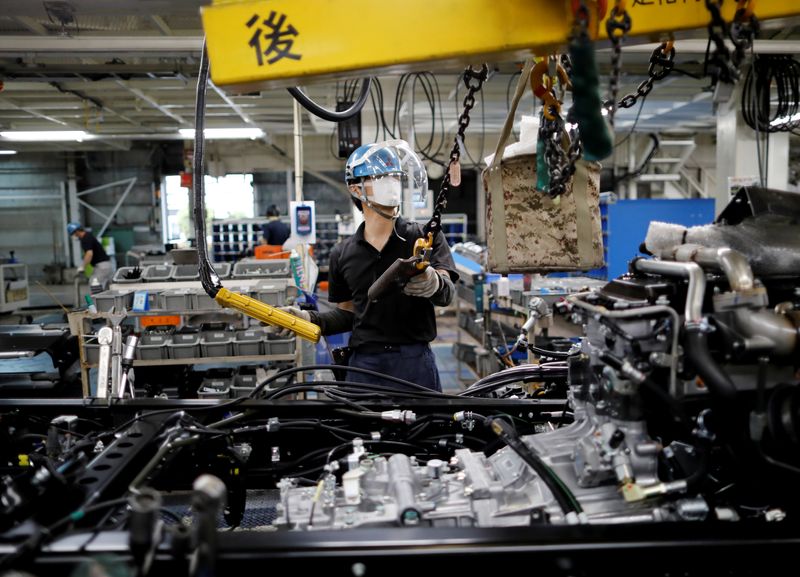 © Reuters. FILE PHOTO: An employee wearing a protective face mask and face guard works on the automobile assembly line at the factory of Mitsubishi Fuso Truck and Bus Corp in Kawasaki

TOKYO (Reuters) – Confidence at Japanese manufacturers strengthened in March, the Reuters Tankan poll showed, as firms grew more upbeat about a gradual economic recovery though worries about the immediate impact of the coronavirus remained.

The monthly poll indicated that the Bank of Japan’s (BOJ) tankan quarterly survey due April 1 will show an improvement in business sentiment among manufacturers, while that of non-manufacturers remains depressed.

It comes as investors are closely eyeing the outcome of a BOJ policy review on Friday in which it may phase out a numerical target for its asset buying, a move which would mark a turning point for Governor Haruhiko Kuroda’s massive stimulus programme.

The Reuters Tankan showed the sentiment index for manufacturers improved to 6 from 3 in the previous month, led by chemicals and oil refinery/ceramics. Some 235 out of 482 large- and mid-sized non-financial firms surveyed between March 3 and March 12 responded, all on condition of anonymity.

Emergency measures rolled out in Japan to halt the country’s third, and most lethal, wave of the virus has curbed consumer spending and hit the services sector particularly hard.

“Almost all accommodation and banquet reservations were cancelled due to the impact of the third wave (of the virus), bringing conditions for us back to a critical state,” a manager at a services sector firm wrote in the survey.

The non-manufacturers’ index edged up to minus 5 from minus 7 in the previous month but remained in negative territory. It was seen rising to 5 in June, turning positive, the poll showed.

The world’s third-largest economy expanded at a slower-than-initially-reported pace in the fourth quarter of last year, the government said last week, with the virus crisis causing firms to scale down their capital spending.

Respondents said economic conditions were improving, in part due to solid Chinese demand.

The sentiment index for manufacturers was expected to rise further to 15 in June, according to the poll.

But some noted the rebound was centred on specific areas of the economy, such as semiconductors and electrical device-making.

“The momentum has slowed slightly except in semiconductors even as the recovery trend continues,” a manager at a rubber producer reported in the survey.

Another manager, at a transport equipment maker, wrote: “Transportation costs have soared because of a container shortage, and it has become difficult to secure ships, even though customer orders have recovered.”

The Reuters Tankan indexes are calculated by subtracting the percentage of respondents who say conditions are poor from those who say they are good. A negative reading means pessimists outnumber optimists.

Santo Lisi Obituary – Santo Lisi Cause of Death – Passed Away