Israel’s fourth election in two years could end in deadlock between prime minister Benjamin Netanyahu and a rival camp determined to unseat him, according to exit polls broadcast by local television channels.

The exit polls, which have been notoriously unreliable in the past, predicted a race too close to call, even though Netanyahu’s Likud party retained a commanding lead over competitors.

The five-time premier’s rightwing coalition was on course to be within a few seats of a majority.

One exit poll showed him at the 60-seat mark in the 120-seat Knesset, if he can entice former ally and defence minister, Naftali Bennett, to join his coalition. Another poll showed his alliance with Bennett at 59 seats.

Provisional results are likely to take days after counting was slowed by coronavirus curbs. With Israel’s political gridlock hanging on a margin of a single seat, the fractious coalition-building that has taken months in the past is predicted to be just as contentious this time round.

Netanyahu stopped short of declaring outright victory late on Tuesday after the exit polls were revised.

“This is a huge victory for the rightwing,” he had tweeted around midnight. “A clear majority of Israeli citizens are rightwing, and they want a strong and stable rightwing government.”

Four elections in two years have left voters who want to oust Netanyahu, 71, cancelled out by those who have sought a sixth premiership for an indicted prime minister fighting off a corruption trial.

Netanyahu campaigned on his success in bringing enough vaccines to Israel to inoculate the majority of adults. It allowed him to safely reopen the economy just two weeks ago, and have news from his ongoing trial eclipsed.

His rivals include a former television presenter focused on middle-class issues, a breakaway faction of ex-Likud leaders, a secular nationalist leader of Russian-speaking Israelis, and a constellation of leftwing parties. They campaigned without a candidate for prime minister, promising only to work out an alliance if they collectively unseated Netanyahu.

This group of committed anti-Netanyahu parties is now in a dead-heat with the prime minister in the exit polls, but it is unclear if they will be able to marshal a coalition even if they pull ahead.

Yesh Atid, headed by Yair Lapid, emerged as the second-largest party. However, at roughly half the size of Likud’s vote haul, it faces a huge struggle in putting together a rival coalition.

“As of this moment, Netanyahu does not have 61 seats,” Lapid said in a televised speech, saying he had already started talks within the bloc. “We will do everything possible to establish a sane government in the State of Israel.”

Benny Gantz, the wartime general who fought Netanyahu in three previous elections, was punished by voters who felt betrayed by his decision to join a coalition government with Netanyahu as premier. Exit polls showed that his party, once part of an alliance that equalled Likud’s pull, at less than seven or eight seats.

“I am centre-right, a Likud supporter, but I didn’t vote for Bibi,” said Randi Mellman Oze, 62, in Jerusalem. “He puts his own needs ahead of his country’s needs — his time is over.” 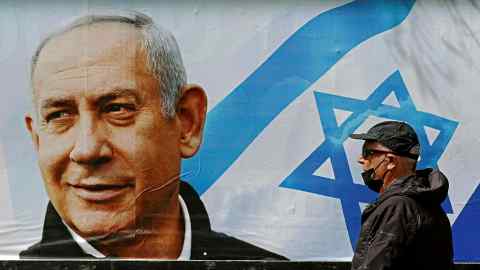 After debuting in opinion polls at nearly 20 seats, New Hope eventually garnered less than six, the polls suggested, indicating that Netanyahu retains the mantle of the right’s undisputed leader.

The largest upset appears to be the near-complete collapse of the Arab bloc of voters. The Joint List of Arab parties, which won 15 seats in the elections last year, split before this fourth poll and will now drop to under eight seats.

The breakaway faction, known as Ra’am, had chosen to remain uncommitted to Netanyahu’s future in contrast to the Joint List’s staunch opposition.

However, it is hovering near the voting threshold needed to cross into the Knesset. Failing to reach it would end attempts by the Ra’am leader Mansour Abbas to emerge as the Islamist kingmaker in the Jewish state’s politics.

“I am angry about the division [in our ranks],” Ayman Odeh, leader of the Joint List, told Channel 12 News. “We wanted full unity. And now, Netanyahu is close to forming a very extremist government.”

If Ra’am defies the exit polls and emerges with more than 3.25 per cent of the national vote, Netanyahu’s path to a coalition becomes more uncertain.