India says it is “calibrating” its vaccine exports in an attempt to balance surging domestic demand with international orders, raising doubts over the Serum Institute’s capacity to meet its commitments.

New Delhi has suspended exports, potentially for weeks, while it expands its vaccination campaign to Indians 45 years and older on April 1 but insists that it has not banned drug shipments.

Harsh Vardhan, India’s health minister, said on Friday that the government planned to widen vaccination eligibility even further in the “near future” as the country struggled to contain an accelerating second wave of infections.

Narendra Modi’s government recently ordered 100m doses of the Oxford/AstraZeneca vaccine from the Serum Institute of India, the world’s largest vaccine manufacturer and leading Covax supplier, taking all the doses the company will produce in the upcoming weeks.

The Serum Institute is producing more than 70m doses a month, or 2.4m a day, though it has plans to expand production to 100m doses a month by May. But if India’s vaccine demand shoots up to 5m a day as targeted, it would struggle to meet its international orders.

“We had stated that keeping in view the domestic requirements of the phased rollout, India will continue to supply Covid-19 vaccines to partner countries over the coming weeks and months in a phased manner,” said a government official. 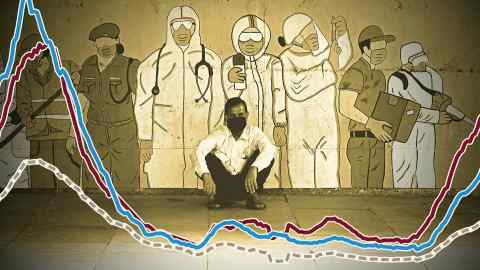 “Given our current manufacturing capacity and requirements of national vaccination programmes, there may be a need to calibrate the supply schedules from time to time,” said the official. “We have not imposed any ban on exports of vaccines, unlike many other countries.”

New Delhi suspended exports after a wave of what critics described as “vaccine nationalism”. The EU and Britain have squabbled over supplies while Italy blocked the export of 250,000 doses of the Oxford/AstraZeneca vaccine to Australia at the start of March.

India is accelerating its vaccination campaign as new infections gather pace across the country of 1.4bn people, threatening a fragile economic recovery with cities reimposing curfews and shutting down schools.

The commercial capital of Mumbai reported 5,185 new cases on Wednesday, the highest single day rise since the start of the pandemic.

Experts said the country had the capacity to inoculate 5m people a day. But far fewer have come forward for vaccination in the early phases of the rollout, which was limited to frontline workers, people older than 60 and those older than 45 with comorbidities.

However, demand for the vaccine is expected to increase significantly when younger adults arrive for the jab with the elderly relatives in tow. By mid-April, more people are expected to return for their second dose, piling greater pressure on supplies.

“We’ll see how the rollout goes, will there be a significant amount of demand? If that happens, will there be a shortage of vaccines even in India?” said Anant Bhan, at Yenepoya University. “India will have to balance between domestic needs and exports.”

Bhan said India would probably do its best to honour its international commitments to bolster its reputation as a pharma power. “For India this is an important diplomatic effort,” he said, “If India wants to be a leader in global health equity then this is an opportunity to create that impact.”

The Serum Institute has supplied the majority of the 55m doses administered in India, where uptake of the Bharat Biotech vaccine, the only other shot cleared for emergency use, has been subdued.

New Delhi has yet to give approval for other vaccines, including Russia’s Sputnik V, which has tie-ups with multiple Indian manufacturers to produce millions of doses.

India has exported 60m vaccines to more than 70 countries. Its latest export to South Sudan under the Covax facility was delivered on Thursday.