Hong Kong’s expat finance community has voiced deep concerns about the government’s strategy to contain the coronavirus pandemic after hundreds of families were locked in their homes or taken to quarantine camps.

About 750 people, including children, were forced into government-run quarantine centres late last week as the authorities rushed to contain a Covid-19 outbreak at a gym that is popular with expats who work in Hong Kong’s financial district.

Police also locked down nine buildings in Hong Kong Island’s Central and Mid-Levels districts that are home to expat families. There was particular concern that infants attending a playgroup were among those ordered into quarantine camps for two weeks.

The US consulate on Monday said it was in talks with the “highest levels” of the Hong Kong government about “testing, quarantine and hospitalisation procedures, particularly in regard to the possible separation of children from their parents”.

International banks operating in Hong Kong have also alerted Asifma, the capital markets industry body in Asia, to their fears that the strict quarantine rules could damage the territory’s position as a global financial centre, according to two people familiar with the matter.

Those people said Asifma was discussing how to approach Hong Kong’s leadership about easing the restrictions. Asifma declined to comment.

“This is not about asking for special treatment,” said one expat banking executive in Hong Kong. “It’s about saying ‘get your act together’. Because [the rules] are undermining the position that Hong Kong is an important financial centre.”

They also cited continuing discussions between banks and Asifma about the 21-day hotel quarantine for anyone entering Hong Kong. Morgan Stanley approached Asifma several months ago about whether global banks operating in Hong Kong should challenge the strict travel quarantine rules. The bank declined to comment.

The American Chamber of Commerce in Hong Kong, which represents US businesses in the city, planned to survey members on Monday to ask whether the weekend’s events would cause them to reconsider their presence in Hong Kong, a person with knowledge of the matter said. International chambers of commerce are due to meet the government on Friday.

“Hong Kong’s Covid controls have been brought much closer to home for the expat community,” said the banking executive. “The prospect of seeing your kids go to a quarantine camp has been uncomfortable.”

The person continued: “International businesses are saying that if the government can’t articulate a better strategy, there will be a talent exodus from Hong Kong. A lot of families are rethinking their plans.”

Foreign workers have also taken to social media to express their outrage. An online petition demanding the Hong Kong government change quarantine policies for children has attracted more than 4,500 signatures.

Hong Kong has one of the world’s strictest quarantine regimes. Individuals who have been in contact with a person who has tested positive for the virus are taken to a government-run quarantine facility for two weeks, even if they repeatedly test negative.

The measures — credited with helping to control the spread of the virus in Hong Kong — have been in place since last year. However, they have been brought into sharp focus in finance circles in recent days due to the high number of cases among foreigners involved in the outbreak linked to the Ursus Fitness gym.

Hong Kong-based executives privately expressed distress over how the territory’s Covid-19 policies are being applied. “Everyone is now extra worried about getting the call saying you will be taken to a quarantine camp,” said one hedge fund manager.

“I spent the weekend refreshing my ‘go bag’ that is kept by my front door,” added a senior M&A banker. “It has a spare laptop, extra bedding, towels, food, water, books and an internet router.” 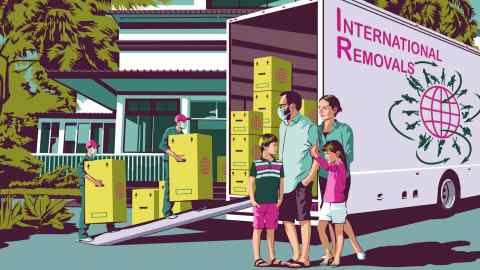 A fintech executive who was taken to a quarantine facility near Hong Kong’s Disneyland resort said: “Everyone in my office was called at around lunchtime and given half a day to get our stuff together. It was hardcore.”

The latest outbreak has prompted fears of a new wave of the virus in Hong Kong, where new infections have been relatively stable for several months. At least 109 confirmed cases of the virus have been linked to a cluster that began at Ursus Fitness.

The outbreak has forced several Hong Kong financial institutions to revise policies aimed at helping their staff to return to the office.

HSBC, Credit Suisse and Morgan Stanley have shut floors for deep cleaning and advised some staff not to come to work. Some of the banks’ employees have been subjected to compulsory testing orders or quarantine camps by the government’s health department in recent days.

An issue for the Hong Kong government is that popular sentiment in the territory is against giving any special treatment to expatriates or wealthier citizens. Hong Kong’s heath department on Monday said it would assess “on a case-by-case basis to arrange for caregivers to be admitted to the quarantine centre together with minors”.

Ukraine: WFP teams up with Uber, in boost for pinpoint aid deliveries