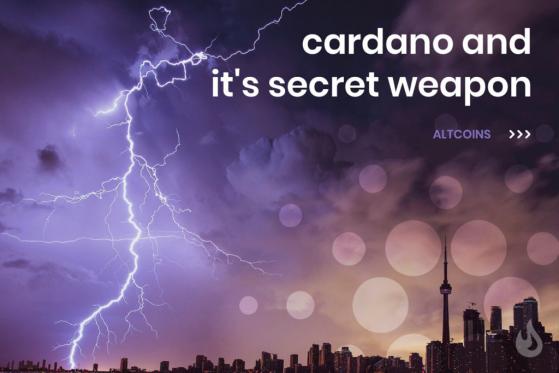 Cardano is a Proof-of-Stake Blockchain platform that prides itself as the first to be grounded in peer-reviewed research and has wide applicability across retail, agriculture, finance, health care, and administrative sectors.

Recently, Cardano became a multi-asset blockchain following its hard fork. Aside from the wide range of applications and its pioneering technology, Cardano owes a great deal of its relevance to its dedicated community.

Community interest has seen Cardano’s “Project Catalyst” evolve to become the largest Decentralized Autonomous Organization (DAO) in the world and the community maintains an active presence across major social networks with healthy metrics.

Cardano’s Secret Weapon
Cardano’s launch in 2017 by founder Charles Hoskinson galvanized interest within the cryptocurrency ecosystem as it sought to overcome the inherent problems that plagued and . In particular, it aimed to solve the slow pace of transaction and rigid nature of Bitcoin while also addressing the scalability issues of Ethereum.

Since its launch, Cardano and its ADA token have grown in leaps and bounds to become the fifth-largest cryptocurrency with a market capitalization of $38,289,874,302.40, trading at $1.20.

Cardano’s boisterous community is largely responsible for its growth and landmark achievements. Recently, it was announced that Cardano’s “Project Catalyst”, a community-propelled initiative, was launched to give support to decentralized applications (dApps).

The project exceeded expectations to become the world’s largest DAO. The project has been an overwhelming success; four fundraising events have raised over $1 million with a target of $15 million by the end of the year. According to the IOHK, within 7 months the project has grown to 1800 active voters and 7,000 registered supporters.

On Twitter, Cardano boasts an active population of 328,000 followers. The official Cardano Facebook (NASDAQ:) Group has 35,759 members and the sub-Reddit has 283,377 members, where discussions and announcements take place.

Cardano’s Development Leaves Community Ecstatic
As a reward for Cardano’s loyal community support, Charles Hoskinson announced that Cardano is now tradable on Coinbase, hailing the move as a “significant milestone in the development of Cardano”.

The announcement was well received by the Cardano community and caused ADA to experience a price rally.

Furthermore, the electrifying thrill of NFTs in the space has led to a major update in Cardano, “introducing native tokens and multi-asset support” for the platform.

This update will allow users of Cardano to mint their own NFTs on the Cardano mainnet without the requirement of smart contracts to create native tokens.

Charles Hoskinson, founder of Cardano noted that the project minted 591assets in just 8 days after the launch of the update, signaling exciting prospects for the loyal and dependable community around Cardano.