The Biden administration and China ended their first high-level meeting on Friday after two days of talks in Alaska that produced an extraordinary public spat and no sign of improved relations between the powers.

Speaking after the end of the meeting in Anchorage, Jake Sullivan, national security adviser, said the two sides had held “tough” discussions after an initial exchange in Thursday where they hurled accusations at each other.

“We expected to have tough talks on a wide range of issues and that’s exactly what we had,” Sullivan said after he and Antony Blinken, US secretary of state, met their Chinese counterparts.

Yang Jiechi, the top Chinese foreign policy official who sparred with Blinken on Thursday at the start of the meeting, said the talks were “candid” and constructive, according to Xinhua, China’s state-run news agency.

The meeting was the first top-level, in-person engagement between the two countries since Joe Biden became president in January.

I’m hearing deep satisfaction that the US is back, that we’re re-engaged with our allies and partners

The Chinese officials came to Alaska hoping for a “reset” in relations after four turbulent years under Donald Trump. But the Biden team made clear that they would take a harsh stance on issues that China considers as “red lines”: the crackdown on democracy in Hong Kong, human rights abuses in the northwestern Xinjiang region and aggression towards Taiwan.

“We wanted to share with them the significant concerns that we have about a number of the actions that China has taken and . . . concerns shared by our allies and partners,” Blinken said on Friday.

Blinken said it was “no surprise” that he got a “defensive response” on Thursday when — sitting across from Yang in front of the media — he raised concerns about issues such as Hong Kong and Xinjiang where the US and China are fundamentally at odds. But he said they also had “candid” talks over issues such as Iran and North Korea.

After Blinken on Thursday told Yang that the US would criticise China’s policies towards Hong Kong, Xinjiang and Taiwan, Yang fired back with an 18-minute speech that accused the US of being an imperial power.

Yang said the US had a “cold war mentality” and was trying to “incite” countries to attack China. He pushed back against criticism of China’s human rights record by pointing out the racial divisions playing out in America. In response to claims that China conducted cyber attacks on the US, he said America was “champion in this regard”.

While the two powers appeared to have more substantive negotiations in private than in the open hostility on display on Thursday, the meeting underscored the dismal state of relations. It also provided more evidence that Biden does not intend to veer far from the tough stance that Donald Trump took towards China in his final year. 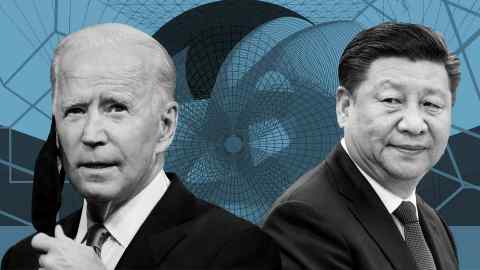 On Friday Biden said he was “proud” of his secretary of state when asked about the extraordinary exchange that occurred on Thursday.

After Yang rebuked Blinken for his opening remarks, the US diplomat asked the media to remain in the room so that they could report on his own response to his Chinese counterpart.

Responding to the accusation that other nations did not want the US imposing its values, he said that he had spoken to almost 100 counterparts who had all welcomed renewed US engagement.

“I’m hearing deep satisfaction that the US is back, that we’re re-engaged with our allies and partners. I’m also hearing deep concern about some of the actions your government has taken,” Blinken said.