The US Securities and Exchange Commission has directed two of America’s biggest oil companies to hold shareholder votes on far-reaching new emissions targets, as the regulator adopts a tougher approach to climate under the Biden administration.

The SEC denied requests from both ConocoPhillips and Occidental Petroleum to throw out shareholder motions that would force them to lay out detailed plans for cutting their so-called “Scope 3” emissions — those from the burning of their products by customers.

Both companies had argued that the proposals, to be presented at their annual meetings, sought to micromanage their operations — grounds under which the regulator had allowed companies to reject similar proposals under the Trump administration. But the SEC said it was “unable to concur” with this argument in both instances.

“In our view, the proposal does not seek to micromanage the company to such a degree that exclusion of the proposal would be appropriate,” the regulator wrote to Conoco in a letter seen by the Financial Times. 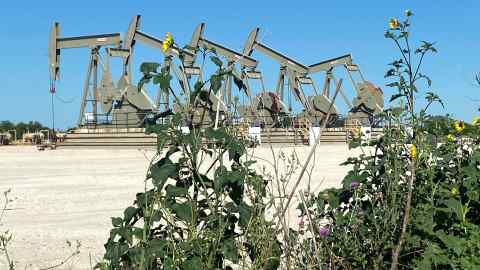 The decisions mark the first time that the SEC has denied requests by oil and gas companies to exclude votes on Scope 3 emissions, according to activists. They suggest the regulator is pushing ahead with a more interventionist approach under the new administration, even before the confirmation of its new chair.

“They are wasting no time,” said Mark van Baal, founder of Follow This, a Dutch shareholder group that filed the motion against Conoco. “I think it’s really impressive that less than two months after the inauguration there is a completely new spirit at the SEC.”

Under the Trump administration, campaigners said the SEC made it easier for companies to throw out shareholder proposals on spurious grounds rather than put them to investor votes, following a broadening of the definition of micromanagement.

Companies were allowed to reject about 15 per cent of environmental and social proposals in 2018, compared with 9 per cent in 2016, according to Institutional Shareholder Services, an independent investor advisory group.

Joe Biden has promised to put efforts to tackle climate change at the heart of his presidency. Although a narrow majority in Congress limits his ability to use legislation as a tool, analysts said the SEC decisions made it clear he would use every avenue available to achieve his ambitions.

“This is no doubt just the beginning of Biden appointees requiring far greater financial disclosure by fossil interests, similar to those mandated in Europe in recent years,” said Paul Bledsoe, a former White House climate adviser under Bill Clinton.

“Biden’s team intends to leave no climate stone unturned, very much including shareholders rights and the financial sector more broadly.”

While US oil and gas companies have begun to set some emissions targets, these have generally been less ambitious than those set by their European counterparts.

ConocoPhillips has committed to cutting emissions from its operations and those of its suppliers to zero, but has drawn the line at setting targets on Scope 3 emissions, created by its customers. Occidental has said it will cut Scope 3 emissions to zero by 2050 but has yet to lay out interim targets on how it will get there.