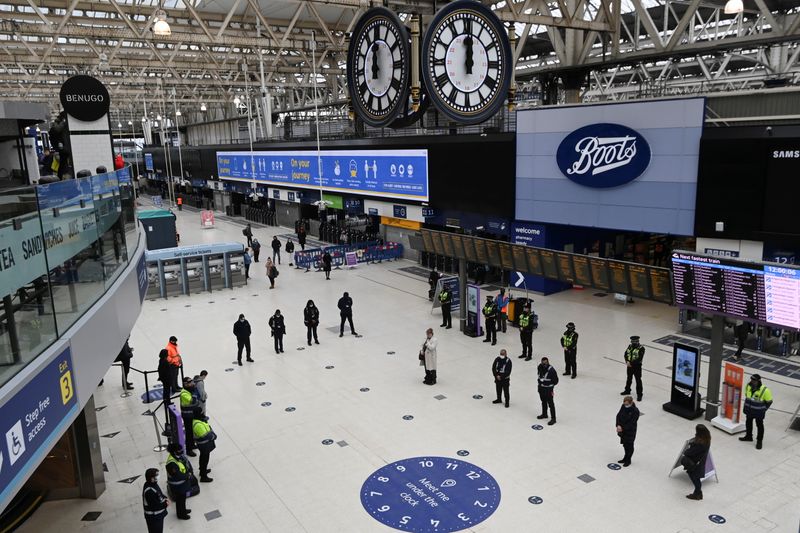 © Reuters. Britain marks the anniversary of its first coronavirus lockdown

LONDON (Reuters) – A year to the day after they were first ordered to stay at home to contain the spread of COVID-19, Britons on Tuesday remembered more than 126,000 people who lost their lives to the disease, a toll few people could have imagined in March 2020.

At midday (1200 GMT), people in parliament, hospitals, churches, public places and offices – still mostly empty with millions working at home due to social distancing rules – fell silent for a minute to honour the dead.

People were also being invited to stand on their doorsteps at 8 p.m. holding candles or torches.

Official data show that on March 23, 2020, when Prime Minister Boris Johnson stunned the nation by ordering people to stay at home and shutting down much of the economy, fewer than 1,000 Britons had succumbed to the novel coronavirus.

The number of people known to have died in the United Kingdom within 28 days of testing positive for COVID-19 now stands at 126,172, the worst toll in Europe and fifth highest in the world.

Johnson, who was himself very ill with COVID-19 in April 2020 and spent three nights in intensive care, opened Tuesday’s cabinet meeting by reflecting on “a very dark and difficult year” for Britain, his Downing Street office said.

Johnson told ministers the nation was mourning for those who have died, and he paid tribute to health and care workers and to society as a whole for keeping the country going.

“As we look forward to a brighter future together, today we pause to reflect on the grief and loss that continues to be felt by so many people and families,” she said in a message.

In the evening, landmarks across the United Kingdom, from the London Eye, Trafalgar Square and Wembley Stadium to Cardiff Castle and Belfast City Hall will be lit up in yellow as a beacon of hope and support for the bereaved.

At Kew Gardens, the world-renowned botanical gardens in west London, two heart-shaped flower beds made up of yellow tulips, hyacinths and polyanthus were on display, in solidarity with the Yellow Hearts to Remember campaign to support the bereaved.

The past year has tested the country with repeated lockdowns, forced separation on families and friends and months of home schooling on millions of children and left industries fighting for survival.

After a second national lockdown kept people shut up in their homes through much of the winter, Britain is gradually easing restrictions under a four-step plan underpinned by the success of the national vaccination campaign.

Close to 28 million people have received at least one dose of a COVID-19 vaccine, offering hope of a gradual return to normality.

Johnson paid tribute to scientists, saying he would not have believed 12 months ago that within a year vaccines would have been developed and half Britain’s adult population would have received at least one dose.

For now, however, life remains far from normal.

During rush hour, a small number of London commuters – all wearing face masks – had space to sit down on their way to work, where before the pandemic thousands of people would have been crammed together.

“It’s been a struggle, I’m not going to lie,” said Londoner Tom Johnson on his commute.

“We can sort of see a light at the end of the tunnel now,” he added. “I think we’re quite a strong, resilient sort of country, and I reckon we’ll come back flying.”