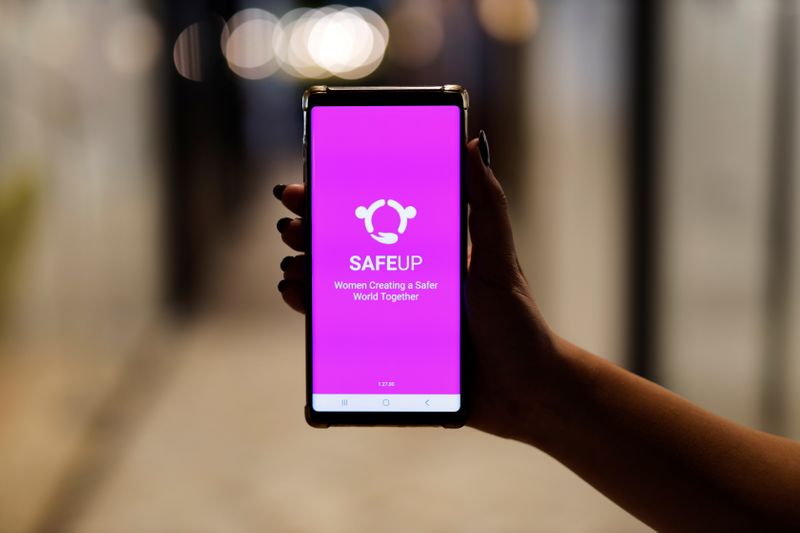 © Reuters. A woman presents the SafeUP, a women’s safety net application, at a co-working space in Tel Aviv

TEL AVIV (Reuters) – The 2011 party in central Israel turned grim when a woman was cornered by two men in a side-room. Then her girlfriends, worried about her absence, turned up. The assailants fled.

It was a strength-in-numbers moment that inspired one of the friends, Neta Schreiber, to develop SafeUp, an app that allows women who feel threatened or unsafe to summon help from other subscribers.

Launched on Sunday in Tel Aviv, at whose municipal technology lab it was developed, SafeUp could provide ideas for bigger cities like London, where the March 3 abduction and murder of pedestrian Sarah Everard has stirred public demands for better counter-measures.

Besides enabling a woman in distress to share her live location with a list of contacts she provides in advance, the phone app can locate and connect via audio or video to volunteer women “guardians”, up to 500 metres (0.3 mile) away.

Should the woman or the “guardians” – who undergo training by SafeUp in legal and psychological aspects of crisis intervention – deem the situation an imminent danger, they can call police through the app, which taps into the phone’s camera and microphone to record evidence.

For less extreme circumstances, “guardians” nearby can go to the scene to help.

“We aim for a response time of five minutes,” Schreiber told Reuters, adding that when a woman being harassed used SafeUp during the testing phase, her reinforcement by two “guardians” was enough to shake off her abuser.

The app, which can be downloaded for free, has also helped avert domestic violence, she said, though “guardians” do not enter private homes.

While Tel Aviv is considered relatively safe in terms of violent crime, the new app has been welcomed by its women.

Some 4% of women in Israel have suffered sexual harassment and 0.3% have suffered molestation, rape or attempted rape, the Central Bureau of Statistics says. Some 45% of women subjected to violence or threats of violence file complaints with police.

“Of course I will use it,” said Lital Herman, a 33-year-old product manager, of SafeUp. “Personally, I feel in Tel Aviv really safe, and I usually don’t go super late at night. But if I do, I have my own dog and if I will feel like I need another partner I will use this app definitely.”

Israeli women’s movement Naamat applauded the launch of the app as a significant step in the overall campaign to stop violence against women but added: “Start-ups and the mobilization of technology in the service of women’s safety is not the be-all and end-all, and not every murder, assault or harassment can be prevented through technology.”