The US plans to send 4m doses of AstraZeneca’s coronavirus vaccine to Canada and Mexico, the White House has announced, the first time the country has accepted a request to send unused vaccines across its borders.

Under the plan, which is being finalised, Mexico would receive 2.5m doses and Canada would get 1.5m, Biden administration officials said on Thursday. The vaccines are part of a stockpile of 7m available doses that have accumulated while AstraZeneca continues its US clinical trials before applying for regulatory approval.

It is first time the administration has agreed to allow the export of US-made vaccines, which the federal government bought under contracts signed by the Trump administration.

With the US expected to have enough doses to inoculate every adult by the end of May, the administration has received several requests to share unused vaccines, including from Mexico, Canada and the EU.

Jen Psaki, the White House press secretary, said on Thursday: “As we await [Food and Drug Administration] approval, many countries have already approved AstraZeneca and also have requested doses from the United States.

“Balancing the need to let the approval process play out — of the AstraZeneca vaccine as it’s taking place in the US — with the importance of helping stop the spread in other countries, we are assessing how we can loan doses.”

President Joe Biden announced earlier this year that the country had already purchased enough vaccine supply for every adult in the US, but has been building up extra reserves.

AstraZeneca has continued to produce millions of doses of vaccine in the US while it continues trials in the hope of receiving authorisation — a decision that health officials say is likely to come next month. Peter Marks, the head of the FDA’s Center for Biologics Evaluation and Research, said earlier in the week the vaccines would not expire while in storage.

The vaccine has already been approved in the EU, Canada and Mexico. Those territories have all struggled to secure as many doses as they would like, and all three have said they would like to receive doses made in the US.

Andrés Manuel López Obrador, Mexico’s president, made his request to Biden on a call at the start of this month. His country has so far administered 4.7m doses of different Covid-19 vaccines, translating to just 3.7 per 100 people. It hopes to increase that pace to 500,000 or 600,000 a day as new deliveries arrive.

The White House denied that the release of vaccines was tied to a demand for the Mexicans to do more to stop an influx of migrants at the US’s southern border. Earlier on Thursday, Mexico moved to restrict travel on its southern border with Guatemala, citing the pandemic.

Psaki said: “There have been expectations set — unrelated to any vaccine doses or requests for them — that [Mexico] would be partners in dealing with the crisis on the border.” 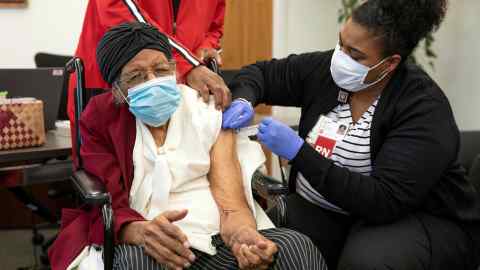 Marcelo Ebrard, Mexico’s foreign minister, confirmed a preliminary agreement on vaccines with the US and said more details would be announced after they were finalised. “Good news!” he tweeted.

Officials would not comment on whether other requests for vaccines, including from the EU, would be granted. “We have a number of requests from a range of countries around the world and certainly will continue those conversations,” Psaki said. “We are open to receiving those requests and obviously making considerations.”

The subject has been the cause of significant tension between the EU and the US in recent weeks, even as many European countries had put the AstraZeneca vaccine on hold due to concerns about blot clots in people who have received it.

The European Medicines Agency said on Thursday the vaccine was safe and effective, prompting countries including France and Italy to announce they would restart vaccinations. Ursula von der Leyen, the president of the European commission, said earlier in the week that the bloc could impose export controls on the vaccine in an effort to secure extra supplies.

Ryan Knapp Obituary – Ryan Knapp Cause Of Death – Passed Away