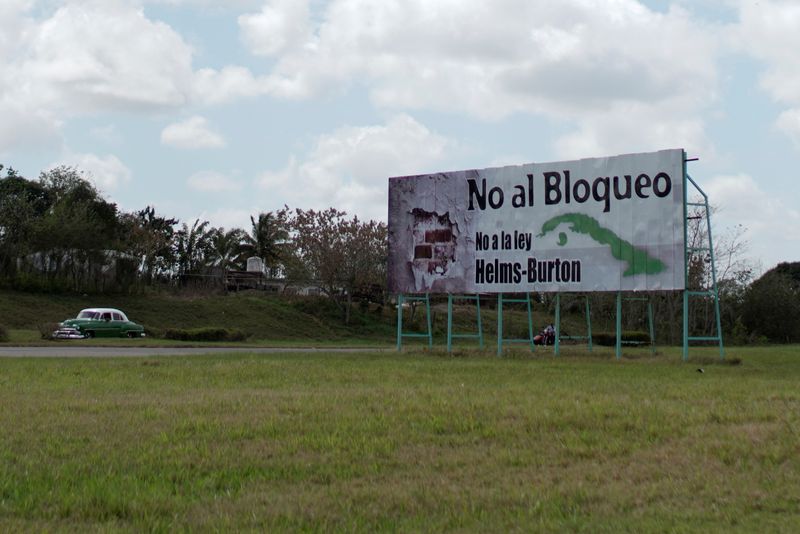 © Reuters. Car passes by a billboard which reads “No to the blockade – No to the Helms-Burton law” in Candelaria

HAVANA (Reuters) – Former President Donald Trump’s decision to put Cuba back on the U.S. list of state sponsors of terrorism just before he left office threw up fresh obstacles to international banking with the island, according to five Havana-based foreign businessmen and diplomats.

The businessmen and diplomats, all of whom requested anonymity, said the few Western banks willing to stand up to already comprehensive U.S. sanctions on the island have stopped transactions or implemented new layers of compliance.

Washington took Communist-run Cuba off the terrorism list in 2015 as part of a thaw in relations under former President Barack Obama. The Trump administration took several steps to reverse that detente, including the terrorism redesignation just days before Trump left office in January.

One of the businessmen cited an email sent by a European bank on March 16, which said in part: “Our legal department after analyzing all the documentation said they will not allow us to open an account for you as they estimate that the risk of working with a company with business in Cuba is too high”.

“These types of letters are nothing new but are increasingly frequent and common,” the businessman said. He asked that the bank not be named.

He said the non-Cuban company planned to receive proceeds from Cuban exports abroad and pay island suppliers abroad, thus there would have been no transactions directly with Cuba.

The increased caution resulted in “the number of counter parties being reduced, increased delays and costs, thereby undermining Cuba’s ability to insert itself into global production chains,” he said.

President Joe Biden’s administration has said it is reviewing the terrorism relisting.

Many analysts believe Biden will reverse the terrorism decision in the coming months, but in the meantime it is further undermining the Cuban economy, which fell 11% last year and has shown no sign of improvement so far in 2021, with key earner tourism down 95% compared with the same period last year due to the pandemic.

In giving reasons for the relisting, then Secretary of State Mike Pompeo said Cuba was “repeatedly providing support for acts of international terrorism” by harboring U.S. fugitives and Colombian rebel leaders, as well as supporting Venezuelan President Nicolas Maduro.

“The actual issues given by Trump and Pompeo for their move of harboring for example some alleged murderers would normally be dealt with by diplomacy if the country were any other but Cuba,” said Paul Hare, a former British ambassador to the island who lectures on global studies at Boston University.

John Kavulich, president of the U.S.-Cuba Trade and Economic Council, said that banks have to protect themselves from scrutiny by the U.S. government.

“Those financial institutions which continue their Cuba-related transactions have been required to expand their internal compliance, which was already onerous, even though most c-suite executives believe that the Biden administration will eventually remove Cuba from the list,” he said.

The issue has affected not just businesses but some embassies, which have had trouble accessing their accounts since the January relisting, the diplomats said.

“We’re still having a problem with financial transfers for the embassy and each one of the diplomats posted here in Havana,” an Asian envoy said.

“Our European bank hasn’t been able to receive any amount of money transferred from our country due to the systematic rejection by some of the intermediate banks since mid-January of any kind of transfer related to Cuba,” he said.