Tribune Publishing’s board has recommended shareholders back a takeover offer by Alden, a New York hedge fund, rather than a higher offer from a Baltimore-based hotel magnate who wants to run the papers as non-profits.

Tribune, the owner of the Chicago Tribune and New York Daily News, said in a regulatory filing that the board decided not to pursue the higher offer after Alden, which owns about a third of the publisher and controls three board seats, “had made it clear it would not support an alternative transaction”.

The rival bid by Stewart Bainum, chair of Choice Hotels, has thrown Alden’s takeover into doubt, however, and given heart to Tribune journalists who have cast the battle as an existential fight against the influx of financial groups into their business.

The takeover requires the approval of at least two-thirds of Tribune shareholders excluding Alden. This puts the spotlight on Patrick Soon-Shiong, the pharmaceuticals billionaire and owner of the Los Angeles Times, who owns about 24 per cent of Tribune, a stake big enough to complicate Alden’s plans.

Alden, known for taking over distressed American newspapers, first secured board agreement to buy Tribune last month in a deal that values the newspaper group at $630m. As part of the agreement, Tribune would sell the Baltimore Sun and two other Maryland newspapers to Bainum for $65m.

However, Bainum last week mounted his bid for all of Tribune at $18.50 a share, valuing the company at $650m, about 7 per cent higher than Alden’s offer.

Bainum last week sent a letter to the committee of independent board members for permission to lift a non-disclosure agreement, so that he could find investors to join his bid for the whole of Tribune.

He has told the company he plans to invest $100m of his own money, while seeking about $200m in debt financing and another $100m in equity, according to people familiar with his bid.

A committee of independent Tribune board members recommended Alden’s acquisition, however, after concluding it offered greater certainty than any other option, the regulatory filing said. 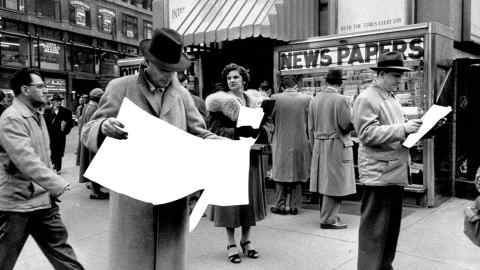 After more than a decade of shrinking revenues, struggling US newspapers have become targets for hedge funds and private equity. Alden has been one of the leading consolidators, making deep cost cuts at its titles to boost profitability.

Through MNG Enterprises, which is a privately owned company controlled by Alden, the hedge fund has amassed a portfolio of more than 200 newspapers, including The Denver Post and The Orange County Register.

Employees of its publications have described the firm as “vulture capitalists”. Political leaders including Democrat Chuck Schumer, the Senate majority leader, have argued that the hedge fund’s management of local newspapers is having a negative impact on American democracy.

Tribune unions over the past year have launched a campaign against Alden, seeking local wealthy individuals to buy their papers.