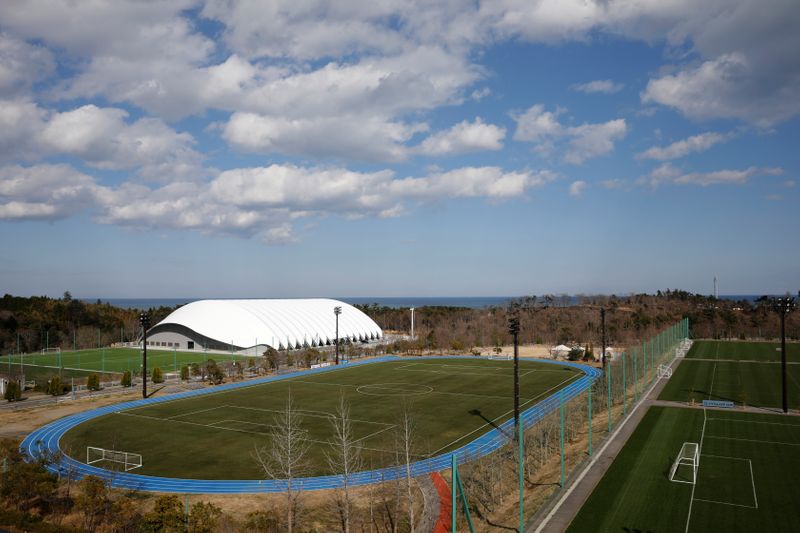 © Reuters. View of J-Village training center where torch relay of the Tokyo 2020 Olympic Games is set to begin in Naraha

FUKUSHIMA/TOKYO (Reuters) – When Shusaku Sagi was 19, he watched his soccer training centre at J-Village in Fukushima morph into a base for workers decommissioning the nuclear power plant nearby after the 2011 earthquake crippled it and caused thousands to flee.

On Thursday, the sports complex will house the starting ceremony for the Olympic torch relay, kicking off a countdown to the Games in Tokyo – the first ever organised during a deadly pandemic.

“Big sports events like the Olympics can energize people and send a message to the world to not forget Fukushima,” said Sagi, now 29, who organises youth soccer tournaments at J-Village.

Members of the Japanese national women’s soccer team will use the Olympic flame, flown in from Greece, to light the torch. But the ceremony – originally planned for thousands of fans as a celebration of Japan’s recovery – will be closed to the public.

The first section of the relay will not have spectators, and as some 10,000 runners take the torch across Japan’s 47 prefectures, including far-flung islands, onlookers must wear masks and socially distance.

The four-month event has been hit by several high-profile runner cancellations as celebrities have pulled out, citing late notice and worries about drawing crowds during the pandemic.

Hiromi Kawamura, who oversees the relay, said organisers have had “some crazy days” juggling fast-changing information, a shifting pandemic situation and negotiations with national and local governments.

“We’re asking people not to stand shoulder-to-shoulder. If it gets really crowded… if we feel the situation is dangerous, we’ll suspend the relay. Then we’ll start it again after we’ve made the area safe,” Kawamura said.

Japan has fared better than most countries, with fewer than 9,000 coronavirus deaths. But a third wave of infections has pushed the numbers to record highs, triggering a state of emergency in Tokyo and other areas that was lifted this week.

The majority of the public are against the Olympics being held as scheduled, polls show.

After the nuclear disaster in Fukushima, the government enforced a 20-kilometre (12.4 miles) no-go zone around the plant and turned the J-Village into a staging centre for thousands of nuclear cleanup workers to don protective gear.

“Seeing my childhood playground turn into a base for decommissioning work – even though it played an important function – made me sad because I thought it would never be able to come back to what it used to be,” said J-Village’s Sagi.

The Fukushima native trained there from age 8 until he graduated from high school.

Over time, the nuclear workers left. The rebuilding of J-Village began in 2014; two years later, Sagi, who now organises youth soccer tournaments at the complex, was tasked with measuring radiation levels.

The start of the relay at the venue is meant to highlight the “Reconstruction Olympics” theme – lauding Japan’s nearly $300 billion effort to revive the region.

But some residents do not share Sagi’s enthusiasm and chafe at the government’s efforts to showcase Fukushima.

Vast areas around the plant remain off-limits, worries about radiation linger and many who left have settled elsewhere. Decommissioning will take up to a century and cost billions of dollars.

Takayuki Yanai, who works at a fisheries cooperative in Iwaki, 50km south of the plant, said the concept of “Reconstruction Olympics” was not widely shared by the locals.

“Coastal fishing catch off Fukushima is still about 20% of what it used to be,” Yanai said. “I’m afraid we are sort of left out of the reconstruction.”

Still, members of the Tokyo 2020 Organising Committee remained confident that the event would be a success despite news on Wednesday that another torch bearer was dropping out.

But Tokyo 2020 said that organisers were well prepared to host the relay.

“I’m certain we can hold an Olympics that will be safe and secure for both the participants and the public,” Tokyo 2020 CEO Toshiro Muto said at a news conference on Wednesday.

“If anything, it is our responsibility as the host nation to showcase the power of sport now,” he said at the news conference.