On January 18, a letter written by a little-known activist investor calling for the replacement of Danone chief Emmanuel Faber was leaked to a French magazine. It proved to be a call to arms among the French consumer goods company’s biggest shareholders, who began contacting London-based Bluebell Capital to understand more about its demands.

“If you take the largest investors in the shareholder register, we’ve been called by everyone,” said Bluebell co-founder Marco Taricco in an interview. But he insisted the firm was not the source of the leak to Challenges: “The vast majority was highly critical and dissatisfied with Mr Faber’s performance”.

The episode turned the spotlight on Bluebell, a hedge fund boutique that is fewer than two years old and runs just €70m in assets. The group owns less than €20m of Danone, which has a market cap of €41bn, and has a fraction of the firepower of much larger and more prominent US activists such as $40bn group Elliott Management and $15.5bn Third Point.

Nevertheless, Bluebell quickly became the public face of a campaign at Danone that eventually led to Faber’s ousting last week.

The activist manager, which was set up by former Goldman Sachs bankers, had verbalised a growing and multiyear shareholder frustration over poor performance at the maker of yoghurt and Evian water under its purpose-driven leader.

It marked the latest example of how Taricco and co-founder Giuseppe Bivona have taken on big companies such as Italian bank Monte dei Paschi di Siena, asset manager GAM, and Belgian chemicals company Solvay, drumming up support for its campaigns from fellow shareholders along the way.

In the case of Danone, it reflected the view of many other
shareholders when it called to replace Faber and split the roles of
chair and CEO. Bluebell’s campaign was soon followed by a separate push by another disgruntled shareholder — the US-based fund Artisan Partners.

Amid these revolts, initially Danone pushed to look for a new CEO but keep Faber as chair. This was too little to satisfy the activists but enough to reassure Bluebell the balance was shifting in its favour. Two weeks later Faber was out completely.

Faber’s ousting was reminiscent of the years before the financial crisis when activists with tiny stakes could create fear within company managements. Bluebell’s rivals see the part it played in it as a key victory.

“They were particularly effective in building a consensus among fellow shareholders who may have been nervous” of being seen to criticise Faber’s ethical credentials, said one veteran hedge fund activist.

The successful campaign at Danone, which over the past decade has found itself in the crosshairs of other activists such as Nelson Peltz and Corvex Capital, comes after a tricky period for the strategy. Many activists have been wary of being seen to attack companies already struggling from the effects of the coronavirus pandemic.

There are signs of an uptick in activity after some funds used last year’s sell-off as an opportunity to increase stakes in target companies. With equity markets having rebounded so strongly over the past year, activists are again putting pressure on companies, particularly over how to use cash reserves built up during the pandemic.

There were 57 new campaigns launched globally in the fourth quarter, up 128 per cent on the third quarter, according to Lazard. The “Covid pause is over” for activists, the investment bank said in its latest report.

Before it was a hedge fund, Bluebell began life as an advisory firm. It was set up in 2014, as Bluebell Partners, by Taricco and Bivona, who met at Columbia Business School in New York decades earlier.

In this previous incarnation, the duo sold stock ideas to big-name activists such as Paul Singer’s Elliott Management and Jana Partners. These included working with Elliott in Italian transportation company Ansaldo STS and with Jana at luxury retailer Tiffany. The pair would back the ideas with their own money alongside their larger partner’s investment, whilst also negotiating a profit-sharing arrangement.

“We have strong relationships with former clients like Elliott, Jana Partners and Third Point,” said Taricco. “What matters is the quality of the suggestion you put forward. Our strategy lends itself well to gathering investor support.”

In 2019 they set up Bluebell Capital Partners with Francesco Trapani, the former CEO of Italian jeweller Bulgari, and launched the hedge fund in November of that year.

Today, as Bluebell Capital, the firm’s €70m asset base mainly comprises the founders’ own money and that of friends and family. It has continued its strategy of teaming up with much bigger players to make its voice heard in activist situations.

This was demonstrated in Bluebell Partners’ first campaign, at Italian bank Monte dei Paschi di Siena. It argued that the troubled lender, which had received a state bailout and become a major political issue in Italy, was hiding derivative transactions in its financial statements.

In its hedge fund guise, Bluebell, which was given its name by Taricco’s daughter, runs a highly concentrated portfolio, currently just 11 positions. It focuses on medium and large companies, rather than small-caps where there is more chance a firm will have a dominant — and potentially less amenable — shareholder.

In 2020, Bluebell Capital’s first full year, the fund gained 5.7 per cent, according to investors. The average hedge fund was up 11.8 per cent in the same period, according to Hedge Fund Research, while the Stoxx Europe 600 was down 1.4 per cent.

While most of its investments and interactions are behind the scenes, Bluebell has also recently built a stake of undisclosed size in UniCredit, where it opposes the appointment of chairman-designate Pier Carlo Padoan, Italy’s former finance minister. Bluebell argues that Padoan is not independent because of his role in the bailout of Monte dei Paschi, a possible takeover target for UniCredit. 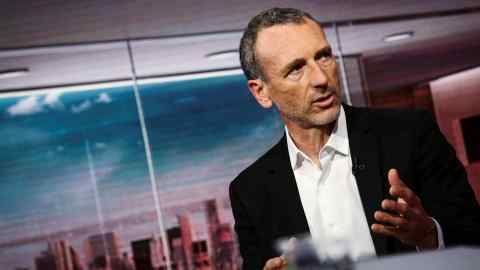 Another target, Solvay, reflects Bluebell’s commitment to undertake one campaign a year at a company where it buys one share and then advocates for better environmental, social and governance behaviour.

Bluebell still sometimes looks to work with bigger funds, as in a private equity co-investment, taking a fee for selling the activism idea.

Taricco said his firm prefers to take a low-profile, constructive approach with companies, “but if it’s made public then we don’t shy away from being vocal”.

Danone’s Faber was one of the most vocal champions in global business for ESG and purpose-driven capitalism, which is becoming an increasing focus of investors.

Taricco said that while he supported Faber’s strong environmental and social focus, the issue was governance — and financial performance.

“We never criticised [the E and S], how can we criticise these things? But it can’t come at the expense of shareholder returns. The first duty of a public company is to remunerate shareholders.”

Taricco added that he has rarely found companies to be defensive when ideas are presented to them. Even when that means removing an executive, the move is always driven by financial analysis. “There’s never anything personal in what we do.”

How to make perfect vanilla cupcakes

How to Create a Bibliography in Word