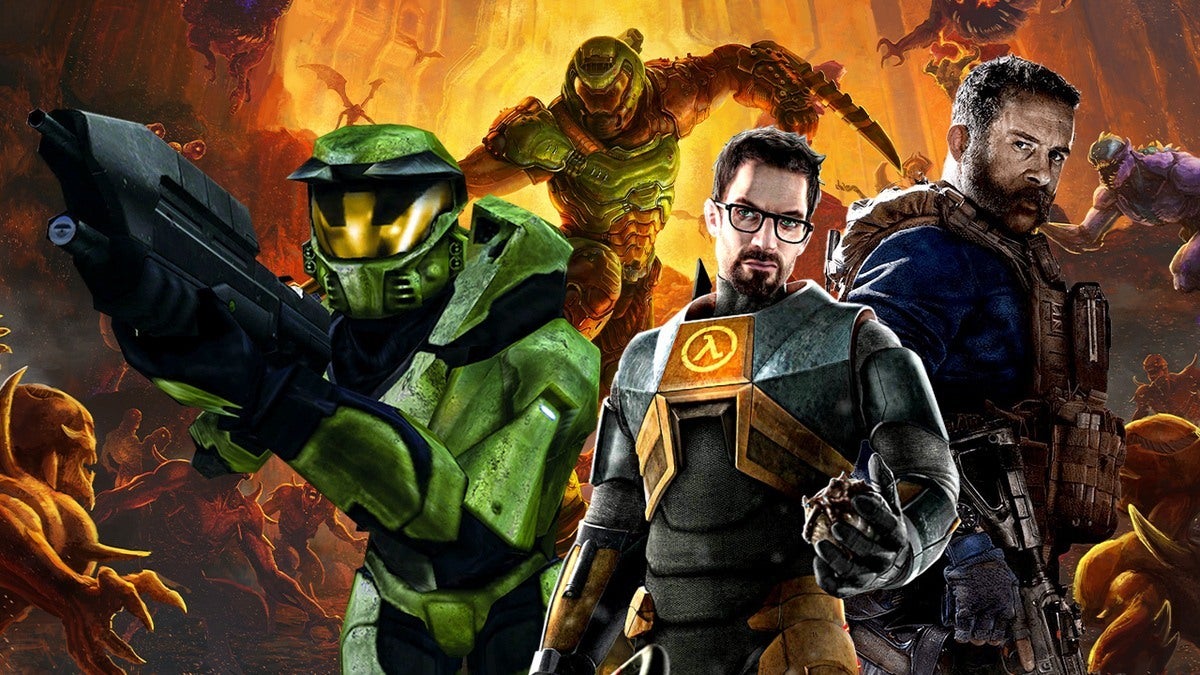 It’s easy to immediately think of classic multiplayer matches and modes when thinking about the history of first-person shooters, but the genre is full of captivating campaigns and memorable stories.

From the far-reaches of the galaxy to the literal pits of hell – and everywhere in between – these are our favorite FPS campaigns.

Call of Duty may have originated as a rival to the dominant Medal of Honor series in the early 2000s, but leaving the backdrop of World War II behind for 2007’s Call of Duty 4: Modern Warfare transformed Activision’s billion-dollar baby into a truly trendsetting force all its own. Call of Duty 4’s bombastic single-player component became the gaming industry’s blueprint for military-based shooter campaigns, and with good reason.

Modern Warfare’s story careens along at a mostly breakneck pace, but it’s a wildly entertaining ride from start to finish, with an enthralling set of missions featuring some of the most memorable levels of the entire franchise. Highlights include the immediately gripping opener ‘Crew Expendable’ with its heart-pounding finishing race to evacuate the now sinking Estonian freighter to the now-iconic ‘All Ghillied Up’ and its eerie rendition of post-disaster Chernobyl. The list goes on, with the chilling realism of ‘Death from Above’ to ‘Aftermath’ and its brief but haunting glimpse of the devastating results of a nuclear blast.

Have you played Halo: Combat Evolved?

Call of Duty campaigns typically range from serviceable at best to genuinely well-done, but it’s hard to look past Modern Warfare’s as the best of the lot.

Halo 3 allowed players to finally finish the fight, with a trilogy-ending campaign that brings Master Chief’s story to a thrilling conclusion. Doing away with the dual-perspective campaign of Halo 2, Halo 3 firmly puts players through their paces as Spartan John-117, channeling Bungie’s top-tier gunplay through a series of memorable encounters. It deftly moves from small-scale, close-quarters combat to wider arenas, while always maintaining blockbuster tension and thrills – and that’s on top of the thrilling vehicle missions and a great use of the franchise-defining Skulls to turn the gameplay experience on its head. Interweaving more personal stakes with its epic main story was no easy task, especially after the two previous entries were so well-loved, but Halo 3 sticks the landing like a plasma grenade on a Grunt.

While it never aims to diminish the power fantasy that comes with ripping and tearing through hordes of Hell’s residents, Doom Eternal is also never shy about reminding you that you need to be smart and methodical with your approach to its stellar combat scenarios. It took everything that made Doom 2016’s revival incredible and upped the ante by adding a unique push and pull to everything you do. You’ve got to dash to get to and away from enemies so they never know where to find you next, unload rounds of ammunition into the hordes of Hell’s creatures, chainsaw an unsuspecting zombie to replenish it all, then get up close and ruthlessly burn your victims to cause them to sweat out armor shards. Doom Eternal is at its best when it practically becomes a rhythm game, rewarding you for executing all of the right moves at the right time. Its story is mostly buried in text or audio logs, but don’t let that deter you. If you’re looking for 10-15 hours of adrenaline-pumping fun through impressively designed levels and encounters, backed by a thrashing soundtrack, then look no further than Doom Eternal.

From its opening moments, BioShock lets you know you’re in for one memorable ride…even if that ride starts with a plane crash. There’s no shortage of stunning sequences: that first moment you catch a glimpse of Rapture as your bathysphere descends, Sander Cohen coming down the stairs, and of course the big, chilling twist that has become one of gaming’s most infamous turns. BioShock is a game composed of beautifully orchestrated and downright, well… shocking moments.

The mix-and-match gameplay of plasmids and firearms means that enemy encounters rarely occur the same way twice, and the story is so crammed with “WTF” moments that it’s hard to put BioShock down, even if you’ve played it before. It’s a game that demands your attention both with its incredible retro-futurist design sensibilities and its mysterious, mind-bending, morality-driven narrative. It was a masterpiece then, and it’s a masterpiece now.

When Halo: Combat Evolved launched back in 2001, Master Chief looked ready to take his place alongside gaming’s other faceless, gun-toting action heroes of the 80s and 90s. But Halo quickly revealed a universe of incredible ambition, depicting a massive war between humans, religious zealots, and a civilization-destroying plague. The original campaign took players through a gorgeous, mysterious world, forgoing the musty browns and gray color palettes of the past in favor of verdant greens, neon purples, and expansive blue skies. The twist, that this beauty was set within a weapon of mass destruction, is only one of the storytelling coups that made Bungie’s sci-fi epic such a hit. With Halo: Combat Evolved, Bungie didn’t just revolutionize the console FPS experience, but laid down the cornerstone with which it built one of the most ambitious and enduring space operas in video games.

Wolfenstein: The New Colossus is the crème de la crème of neck-crushing, noggin’ splittin’, Nazi killin’ heroic pulp, and it’s one of the most magnificent single-player shooters ever. Picking up where The Old Blood and The New Order left off, The New Colossus moves the action to the Nazi-occupied United States of America where the OG of video game anti-fascism – B.J. Blazkowicz – and his loyal band of badasses are waging a bloody guerrilla war against their oppressors. Blazkowicz and his team can’t do it all alone, however, so they recruit a bunch of revolutionaries and hatch a plan that takes them from the radioactive ruins of New York to the ghettoes of New Orleans, even to BJ’s hometown of Mesquite, Texas, and beyond.

A brutal and bloodthirsty mix of close-quarters hatchet jobs and dual-wielded devastation, Wolfenstein: The New Colossus is an ultra-violent, fast-paced splatterfest of completely guilt-free garbage disposal.

Without the original Doom, this list wouldn’t even exist. It’s the granddaddy of them all, and as revolutionary as it was in 1993 – it created a series of copycats that were simply called “Doom Clones” – it continues to inspire modern gaming as well. But historical importance aside, it’s still fun as – pardon the phrasing – hell. It’s fast, frantic, controls like a dream – despite not being in full 3D – has an incredible atmosphere, and its soundtrack is still instantly recognizable. Doom excelled by having one of the best collections of weapons ever wielded in a first-person shooter, from the pump-action shotgun to the gib-inducing RPG, and of course the legendary BFG 9000. But it’s equally revered for its level design, which blended mazes, flickering lighting, and demonic imagery to create maps that remain enjoyable (and full of secrets!) to this day.

No, it’s not Half-Life 3, and yes, it’s VR-only – but Half-Life: Alyx is actually better because of both of those facts. Alyx resurrects one of gaming’s greatest and most revered franchises and melds forward-thinking VR game design with the gorgeous Source 2.0 game engine and roomscale interaction to create a slower but more intimate – and terrifying – Half-Life experience. The way weapons fire and reload is purpose-built for VR in a way that simply wouldn’t work on a 2D screen. So are the puzzles. So are the combat encounters. It really is the “killer app” that VR gaming has been waiting for – and then there’s its story. The less said the better, because by the time you get to the end – the very, very end – you’ll arrive at one of gaming’s all-time mic-drop moments. But what you learn along the way is fully engrossing on its own, too, and proves that Valve hasn’t lost a storytelling step in the years since Half-Life 2. Simply put, Half-Life: Alyx is somehow both a worthy return for Half-Life AND the apex of VR gaming so far, all in one package. t. Alyx is both a modern masterpiece and the VR game we’ve been waiting our whole lives for.

Titanfall 2 has what is undeniably one of the best FPS campaigns of the last generation, and it was incredibly welcome after the original Titanfall game lacked any kind of single-player story. It builds off the universe the first game established but remains captivating all on its own. Following pilot Jack Cooper and his titan, BT, Titanfall 2’s campaign is relatively short, clocking in at about 5 to 7 hours, but developer Respawn makes the best use out of that short window.

Each chapter in the campaign seems to outdo the last, as Titanfall 2 constantly tests your mettle and finds new ways to showcase its excellent shooting and movement mechanics. Effect and Cause is a campaign highlight, though we’ll save exactly why as a surprise for those of you who haven’t played it yet. Suffice to say, it’s a prime example of why Titanfall 2’s campaign is not talked about nearly enough, and why it should be remembered for years to come.

Topping this list is a game that not only changed the way we look at FPS campaigns, but how we interact with games as a whole. Half-Life 2 and its episodic expansions were revolutionary at the time, and they remain an absolute joy to play even today. From the oppressive atmosphere of City 17 to the gravity-defying physics puzzles within it, the influence of Half-Life 2 can be traced through to countless games that followed. But it’s not earning the top spot for its impact on the industry alone. Quite simply, Half-Life 2 is just a ton of fun to play. The story it tells feels both massive in scale and intimately human at the same time, and the contained encounters it constantly throws you into vary from thrilling to clever to downright terrifying. The alien weaponry it puts in your hands to deal with those obstacles are satisfying and powerful, particularly the iconic gravity gun – a weapon so great we still wish it were in just about every shooter we’ve played since.

Half-Life 2 is truly remarkable. It’s not entirely free of flaws, just like every other game on this list, but it’s certainly one where the experience as a whole heavily outweighs any minor missteps. It’s riveting world and smart ideas leave you begging for more, which is just one reason fans of the series have been waiting with bated breath for exactly that for more than a decade. Half-Life Alyx has finally given those fans hope again, and we can’t wait to see where the Half-Life series goes from here – but until we do, Half-Life 2 still stands an absolute masterpiece of an FPS campaign.

While there are plenty of other great FPS games with memorable campaigns, these are the ten we hold closest to our hearts. What’s on your list that didn’t make ours?Let us know in the comments, and why not check out our picks for the Top 10 Mario Games and Top 10 PS2 RPGS . For all your gaming news, reviews, and more, keep it here at IGN.