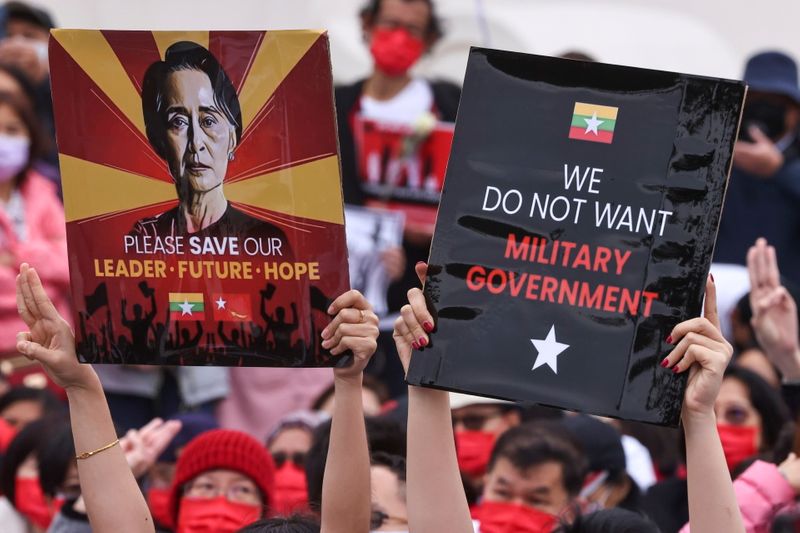 TAIPEI (Reuters) – Hundreds of people from Taiwan’s Myanmar community rallied in central Taipei on Sunday to denounce the coup there, singing defiant songs and holding white and red roses in mourning for those who have died protesting the military.

Taiwan is home to around 40,000 people originally from Myanmar, most of whom are ethnic Chinese. Some are descendents of Nationalist troops trapped in Myanmar, then called Burma, at the end of China’s civil war in 1949. Others have come more recently, fleeing repression and anti-Chinese sentiment.

“People in Myanmar are once again forced to live under the dark shadow of the military regime. As an emigrant from Myanmar, today we gather here to pay tribute to our fellow countrymen and those fallen heroes,” Yangon-born Thomas Chen, 28, a teacher of Burmese at Taipei’s Soochow University, told the crowd.

People sang “We Won’t Be Satisfied Until The End Of The World”, the Burmese-language anthem from the country’s 1988 pro-democracy uprising, brutally put down by the military government of the time, and bowed their heads in prayer to remember the dead.

Hung Sun-han, a lawmaker for Taiwan’s ruling Democratic Progressive (NYSE:) Party, criticised China for supporting the coup. Beijing denies this, though many people in Myanmar view China as supporting the junta that seized power on Feb. 1.

“We know that behind this military coup there are forces from Chinese Communist. This is the thing that people can’t stand the most,” Hung told protesters.

Last Sunday saw arson attacks against 32 Chinese-invested companies in the Yangon suburb of Hlaingthaya, though demonstrators in Taipei who spoke to Reuters played down fears of wider anti-Chinese feelings.

“Many ethnic Chinese are on the streets protesting against the coup,” said Wei Lin, who lived through anti-Chinese riots in Yangon in 1967. “People know how to distinguish between Chinese-Burmese and the Chinese government.”

Winters and the Things Used in Winters