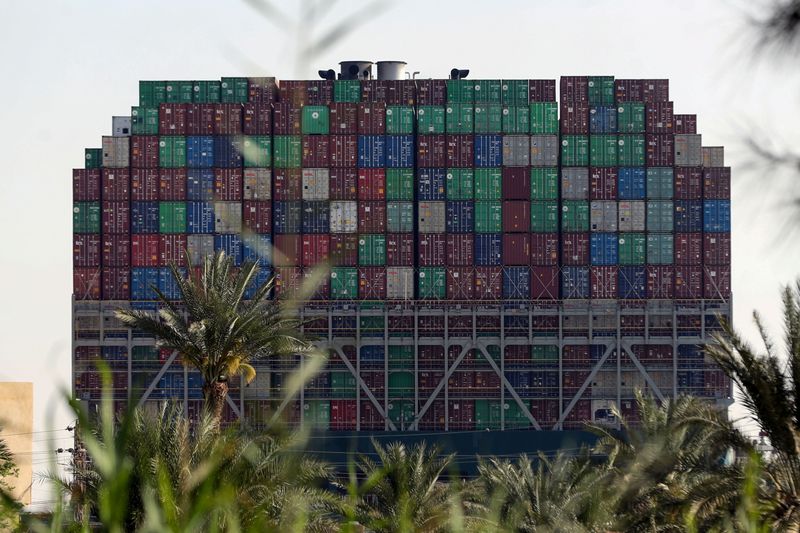 © Reuters. Stranded container ship Ever Given, one of the world’s largest container ships, is seen after it ran aground, in Suez Canal

SINGAPORE (Reuters) – A stuck container vessel in the Suez Canal, which has blocked the flow of goods through the narrow channel, will add strain to global supply chains already stretched by rebounding economic activity and tight shipping container supplies, analysts said on Friday.

The 400-metres long Ever Given container vessel has been stuck in the canal since Tuesday, suspending traffic of containers transporting goods, parts and equipment through the shortest sea link between Europe and Asia.

The blockage comes as shipments have already been disrupted by the coronavirus pandemic and a surge in demand for goods.

Efforts are under way to free the vessel, although salvage experts warn the process may take weeks.

Roughly 30% of global container traffic flows through the canal annually. The severed trade route could affect about 10%-15% of world container throughput while the blockage persists, analysts from Moody’s (NYSE:) Investors Service said.

GRAPHIC: The Suez Canal is one of the most important global trade routes – https://fingfx.thomsonreuters.com/gfx/ce/xegpbgedgvq/SuezContainerTraffic.png

“Very high consumer and industrial demand, a global shortage of container capacity and low service reliability from global container shipping companies… has made supply chains highly vulnerable to even the smallest of external shocks,” they said in a note on Friday.

“In that context, the timing of this event could not have been worse.”

Vessel utilisation has been at full capacity on the Asia-Europe trade route because of heavy demand from European importers, with terminals in Europe experiencing labour shortages due to coronavirus-related measures, said Greg Knowler from consultancy IHS Markit.

China overtook the United States as Europe’s top trade partner in 2020, underscoring Asia’s critical ties to industry and consumers in Europe, which is also the top destination for China’s exports outside Asia.

Delays in returning empty containers to Asian exporters will further exacerbate the current shortage of containers, the consultancy added in a note.

The Suez Canal is also a preferred route for U.S. importers of manufactured goods such as footwear and apparel from Southeast Asia and India, they added.

Ships will now have to potentially take the longer route around the Cape of Good Hope in South Africa, adding about 7-10 days to their journey, which will push up costs.

As a result, Europe’s manufacturing industry and auto sector, including auto suppliers, will be hit hardest, Moody’s Investors Service said.

“This is because they operate ‘just-in-time’ supply chains, meaning they do not stockpile parts and only have enough on hand for a short period, and source components from Asian manufacturers,” the analysts said.

“Even if the situation is resolved quickly, port congestion and further delays to an already constrained supply chain are inevitable.”

They added that alternative modes of transportation are not plausible, as air freight capacity is already tight due to less global air travel while rail transportation between China and Europe is limited and already nearing capacity.

The transport minister of Singapore, the world’s top transhipment hub, said on Thursday the blockage in the Suez Canal could temporarily disrupt supplies to the region, and potentially cause a drawdown on inventories.

“My view is that this will cause problems for a lot of countries and industries around the world in the short run,” said Sumit Agarwal, economics professor at National University of Singapore.