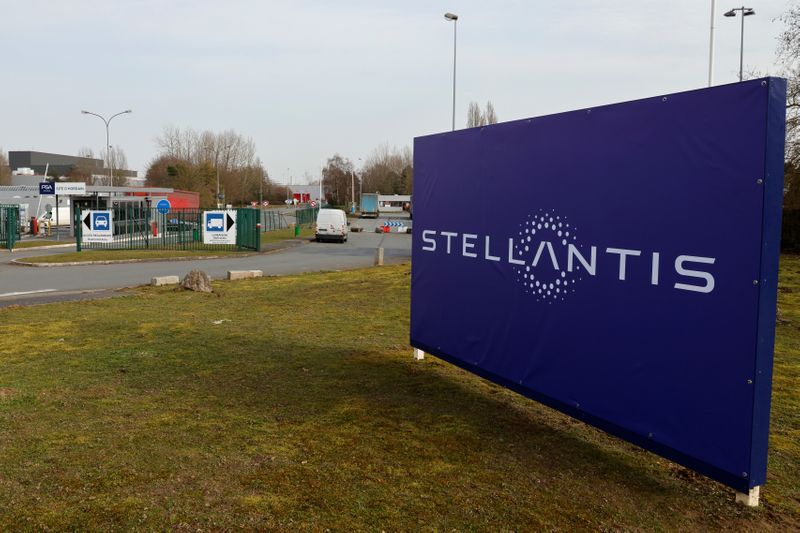 © Reuters. FILE PHOTO: Logo of Stellantis at the company’s factory in Hordain

MILAN (Reuters) – Carmaker Stellantis’ campaign to reduce costs has led to cuts in cleaning services and the number of toilets available in Italian factories, where production is under scrutiny for costing more than elsewhere, unions said on Tuesday.

Carlos Tavares, the CEO of Stellantis, has committed not to cut jobs or close plants following the creation of the company from France’s PSA Group and Fiat Chrysler.

But the carmaker has promised more than 5 billion euros ($5.94 billion) per year in savings following the merger.

Tavares has flagged higher average production costs for cars in Italy than in other countries where the automaker operates, such as France and Spain.

Davide Provenzano of the FIM union said Stellantis was taking action at its Mirafiori plant in Turin, where it assembles the electric 500 car, by reducing the amount of toilets available to workers, cutting cleaning shifts, temperatures and reorganising transport facilities.

“This is happening during COVID-19, when you should be increasing toilets available and cleaning services, rather than cutting them,” Provenzano said.

Stellantis will present its business plan in late 2021 or early 2022.

Edi Lazzi of the left-leaning FIOM union said he believed the cost-saving actions in Italy were the personal initiatives of local management rather than a broad strategy launched by the group.

“The measures are a drop in the ocean,” he said.

Cost-containing measures were reported at other Italian sites.

Nicola Manzi of the UILM union said that Stellantis has cut cleaning services by some 35% in the Atessa plant in central Italy, Europe’s largest van producing facility. However, he said that excluded disinfection services for the novel coronavirus and the number of toilets was also unchanged.

“We’re currently running almost at full capacity, it would be hard to cut the number toilets here,” he said.

Most of the group’s Italian plants have seen further reductions in capacity as the COVID-19 crisis reduced demand.