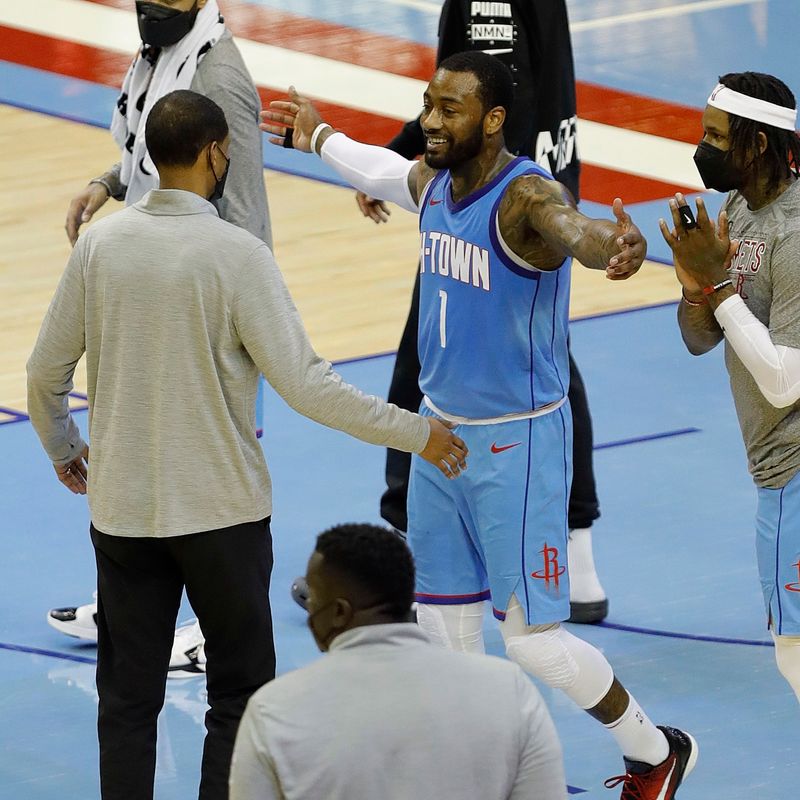 Christian Wood scored 19 points, all in the second half, while John Wall produced a triple-double as the Houston Rockets snapped their franchise-record 20-game losing streak with a 117-99 victory over the visiting Toronto Raptors on Monday.

Wood scored 12 points in the third period, and his floater at the 3:08 mark lifted Houston to an 86-73 lead. However, Toronto closed the third with a 13-2 run that included two Fred VanVleet 3-pointers and a Chris Boucher three-point play. The Raptors pulled within 88-87 on a free throw early in the fourth, but Houston didn’t fold.

Led by its second unit, host Los Angeles battled back from a 22-point deficit in the second half to halt Atlanta’s winning streak at eight games.

Clippers coach Tyronn Lue pulled his starters midway through the third quarter, and the reserves cut the Hawks’ lead to eight points at the end of the third quarter with a half-court heave by Luke Kennard. Kennard finished 8 for 8 for the field, totaling 20 points, seven rebounds and four assists in 18 minutes.

Kawhi Leonard led the Clippers with 25 points, and Terance Mann added 21 points and 10 rebounds. Trae Young finished with 28 points and eight assists to lead the Hawks. John Collins had 23 points and seven rebounds, and Clint Capela notched 14 rebounds and 12 points.

Rudy Gobert had 21 points, 10 rebounds and a career-high nine blocked shots, and Utah pulled away to defeat host Chicago.

Donovan Mitchell scored a game-high 30 points for Utah, which wrapped up a five-game road trip with a 3-2 record. Joe Ingles (17 points), Jordan Clarkson (16) and Mike Conley (15) also scored in double digits for the league-leading Jazz.

Morant hit 3 of 4 free throws in the closing seconds of the extra period to help Memphis secure its third win in four games. Jonas Valanciunas contributed 16 points and a game-high 19 rebounds for the Grizzlies.

Playing without Jayson Tatum, who sat out due to an illness, and Kemba Walker, sidelined due to left knee injury management, the Celtics fell to 2-5 since the All-Star break. Jaylen Brown scored 27 points.

Jrue Holiday recorded season highs of 28 points and 14 assists and host Milwaukee extended its season-best winning streak to seven games with a convincing triumph over Indiana.

The Bucks played without two-time reigning NBA Most Valuable Player Giannis Antetokounmpo (knee) but didn’t miss their star as they racked up 83 first-half points. Khris Middleton registered 25 points, eight rebounds and six assists and Pat Connaughton contributed 20 points and nine rebounds to help Milwaukee win for the 12th time in the past 13 games.

Domantas Sabonis had 22 points and nine rebounds for Indiana, which fell for the ninth time in the past 13 games. Jeremy Lamb scored 21 points, Doug McDermott added 20 and Caris LeVert had 19.

Svi Mykhailiuk, playing in his third game with the Thunder after being acquired in a trade earlier in the month, heated up during a 15-2 run early in the fourth quarter. The surge helped Oklahoma City stretch its lead to a game-high 18 points and take control for good.

Oklahoma City’s Ty Jerome shot 5-for-5 from 3-point range and wound up with 15 points, and Aleksej Pokusevski added 13 points and 10 rebounds. Karl-Anthony Towns led the Timberwolves with 33 points and 10 boards while Anthony Edwards scored 16 points.

Gordon Hayward scored 27 points and Terry Rozier added 24, 17 of those in the second half, as visiting Charlotte held on to defeat San Antonio.

Malik Monk and Bismack Biyombo added 11 points each for the Hornets, who ended a three-game losing streak, and P.J. Washington finished with 10 points and 13 rebounds.

DeMar DeRozan ended up with 28 points for San Antonio. White scored 21, and Mills and Rudy Gay hit for 10 apiece. Jakob Poeltl paced the Spurs with 11 rebounds.

JaVale McGee led the way for the Cavaliers with 18 points and nine rebounds in 19 minutes off the bench.

The Kings used a dominant third quarter, including a 14-1 run over six-plus minutes, to gain separation in the second half. They held the Cavaliers to just 17 points in the period.

Cayce Seal Death – Cayce Seal Cause of Death – Passed Away