Britain’s Hercules transport planes used by special forces operations will be among the most high-profile victims of a sweeping overhaul of defence equipment, part of a review of the military intended to make it fit for the 21st century.

The last remaining 14 Hercules, or C-130Js, are among the country’s longest-serving transport aircraft and have seen service in Iraq and Syria.

Known as the workhorse of the Royal Air Force’s transport fleet, the Hercules entered service in the mid-1950s.

They had been due to keep flying until the mid-2030s. Their missions will be picked up by the RAF’s fleet of 20 larger A400M Atlas transport aircraft, according to people familiar with the plan, which will be unveiled on Monday.

The army’s 700-plus Warrior infantry fighting vehicles will be phased out, according to two people familiar with the situation. Meanwhile, the deployment of the Mechanised Infantry Vehicle (MIV) Boxer will be brought forward. 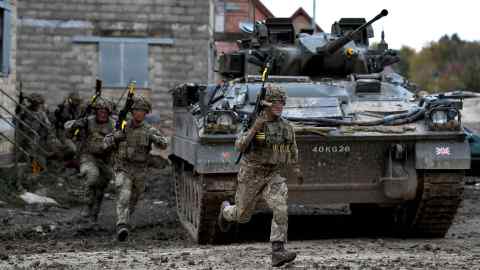 It was not clear last night if a planned upgrade of Warrior would still go ahead. Lockheed Martin, the US defence group, has been in talks with the Ministry of Defence about modernising the decades-old vehicles. The programme is several years behind schedule and has long been under fire, according to defence analysts. Cancellation could put at risk close to 2,000 jobs.

A planned life-extension programme of the army’s main battle tank, the Challenger 2, is expected to be announced shortly after the publication of the review.

The army is expected to bear the brunt of the cuts under the revamp, which has been billed as the biggest military transformation since the cold war, shifting Britain’s conventional equipment programmes to cyber, space and unmanned technologies.

Boris Johnson announced a £16.5bn funding boost for the MoD last year, but at least some of this will be used to plug a £17bn hole in the equipment budget.

Defence insiders said painful decisions had to be made to balance the books while investing in new digital capabilities.

It was “one of those hard decisions that had to be made”, said one person, referring to the decision to retire the Hercules.

Francis Tusa, consultant and editor at Defence Analysis, said some of the Hercules fleet would have required a “significant upgrade to see them through to 2035”. The range and speed of the A400M, he added, were “significantly in excess of the Hercules”.

One of the winners of the review will be the UK’s combat air strategy, including its new fighter jet, Tempest. The government last week confirmed a commitment to spend at least £6.6bn in research and development, which included the development of the so-called Future Combat Air System for the RAF.

Defence insiders said they did not expect a major announcement on the final number of F-35 Joint Strike Fighter aircraft the UK would order. The UK has contractually committed to 48 of the fighter jets as part of a potential order of 138. The jets will fly off the Royal Navy’s two aircraft carriers and 48 is not enough to make both ships operational.

Monday’s white paper will underline the government’s investment in technologies such as artificial intelligence to better integrate its operations across land, sea and air, and move beyond the industrial age of warfare into an information age.

As threats change, our armed forces must change and they are being redesigned to confront future threats, not re-fight old wars

Ben Wallace, defence secretary, said the white paper would be an “honest assessment” of what the UK could deliver. For too long, he said, the British armed forces had been hampered by “over-ambition from government and underfunding”.

“We’ve been boxed in by sentimentality and a sort of Top Trumps game of numbers on paper,” he told reporters at a special operations demonstration in Dorset on Friday. “What that leaves you with is lots of ships that are tied up and not actually available and deployed . . . because you couldn’t properly afford to maintain [them].”

Hinting that the armed forces restructuring would involve cuts, he added: “what matters is availability. What matters is deployability rather than just numbers on bits of paper.”

The MoD on Saturday said last November’s increase in defence spending would “underpin the modernisation of the armed forces”.

“As threats change, our armed forces must change and they are being redesigned to confront future threats, not re-fight old wars. The armed forces will be fully staffed and equipped to confront those threats and any such reporting is merely speculation at this stage.”