North Korea has branded Joe Biden’s attempts at low-level diplomatic outreach a “cheap trick” and promised to disregard any communication from Washington unless the US changes its stance towards the nuclear-armed state.

The escalation of tension between Washington and Pyongyang comes as a policy review on North Korea by the new administration is nearing completion and as Antony Blinken, US secretary of state, and Lloyd Austin, secretary of defence, travel to South Korea and Japan.

Choe Son Hui, North Korea’s first vice-foreign minister, said that no “contact and dialogue of any kind can be possible unless the US rolls back its hostile policy”.

“But what has been heard from the US since the emergence of the new regime is only lunatic theory of ‘threat from North Korea’ and groundless rhetoric about ‘complete denuclearisation’,” Choe said in a statement carried in English by the state news agency.

Blinken on Tuesday said Pyongyang was ignoring US efforts to engage.

The US state department did not respond immediately to Choe’s latest comments.

Earlier, Jalina Porter, state department spokesperson, told reporters: “We are conducting a thorough inter-agency review of US policy towards North Korea, and that includes evaluation of all available options to address the increasing threat posed by North Korea and its neighbours and the broader international community.”

During Donald Trump’s presidency, Kim Jong Un, the North Korean leader, continued to develop nuclear weapons technology while Washington insisted that loosening of sanctions was contingent on concrete steps by Pyongyang to denuclearise.

After a period of unprecedented summitry under Trump, which included three face-to-face meetings with Kim Jong Un, nuclear talks stalled.

Experts have warned the 37-year-old dictator might soon resume military provocation, including through testing ballistic missiles and other weapons. 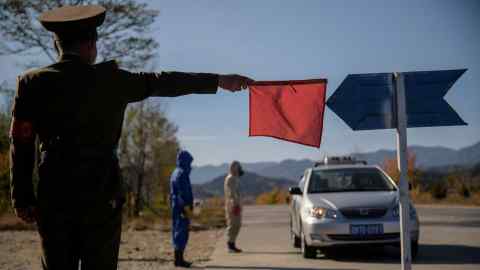 “We should remind ourselves that North Korea’s penchant or reflex for provocations is a fait accompli. And US or international efforts to whet Pyongyang’s appetite for dialogue is, similarly, quite limited,” she said.

Amid mounting signs that North Korea faces an economic and humanitarian crisis — stemming from tough sanctions, strict border closures and typhoon damage — South Korea has called for the easing of sanctions and greater international aid as well as steps that might entice the North Korean leader back to talks.

“Kim has provocation tools at his disposal. And these tools are much more effective than North Korea conceding or compromising,” she said.

Jessica Lee, a researcher with the Quincy Institute, a US think-tank, said rather than reinvigorate Trump’s diplomatic efforts, “the Biden administration seems to be leaning towards maximum inflexibility”.

“Absent positive security assurances, it is unrealistic to think that Kim Jong Un would voluntarily give up his nuclear weapons,” she said.