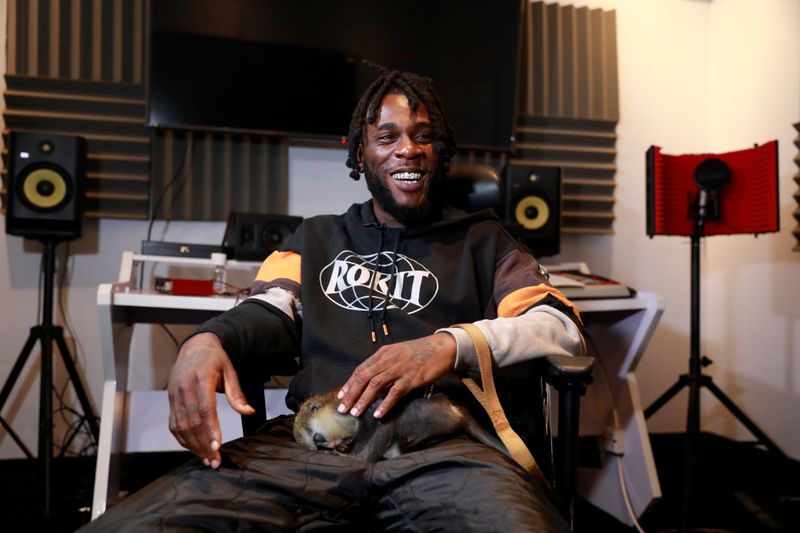 © Reuters. Nigerian music artist, Burna boy, attends an interview with Reuters at his studio in Lagos

Burna Boy was awarded a Grammy for the Best Global Music Album this month for ‘Twice As Tall’ which was released last year.

He is part of a generation of Nigerian music artists, which include Wizkid and Davido, that has enjoyed global success in recent years as proponents of the Afrobeats sound. The African genre is now almost as likely to be heard in London or Los Angeles as it is in Lagos.

“It’s a big moment and a big time for African music and Africans in general,” said Burna Boy, during an interview at his home in Nigeria’s commercial capital Lagos.

The artist, whose real name is Damini Ogulu, said his award was part of a “domino effect” that gives Africans more control over the way they are perceived through technology, as streaming services take the continent’s arts to a global audience.

“I didn’t even want to be African when I was little,” he said. “I wanted to be anything but who I was, because who we are wasn’t really the cool thing to be,” said the artist, who grew up in southern Nigeria and moved to London as a child before returning to the west African country.

He said his win showed that African music was attracting worldwide respect.

Those sentiments were shared by many at Edge Music Academy, in the Jakande district of Lagos, where students compose music in a studio decked out with microphones, laptops and a keyboard.

“The future is bright,” said student Obi Prince. “The way Afrobeats is represented in the world right now can only be a start for Nigerian artists. We just have to do our thing and bring out ourselves more globally,” he said.

“People coming into the industry now have a more concrete belief that you can actually get as far as anybody else in the world can go,” he said.

Reclining in a chair in his home studio, Burna Boy reflected on his success.

“You can’t mention the top five musicians in the world without throwing me or an African in there,” he said, smiling. “Now we’re eye to eye with the people we used to look up to.”