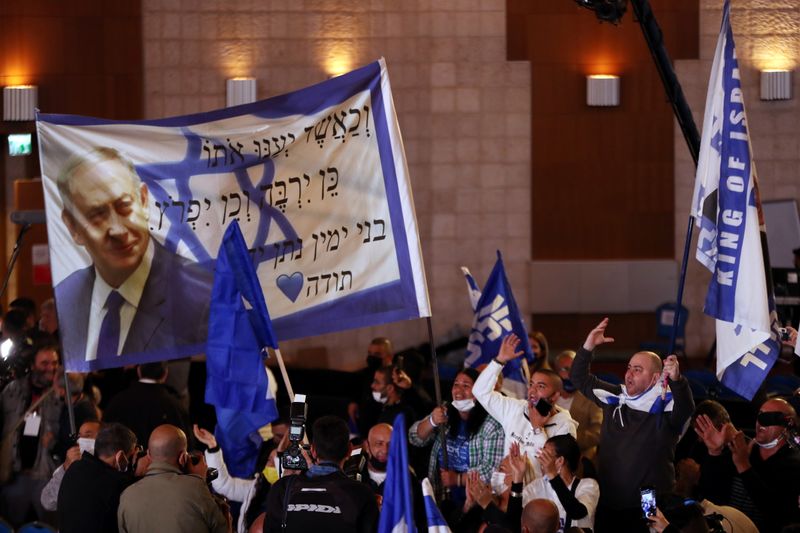 © Reuters. Supporters of Israeli Prime Minister Benjamin Netanyahu hold a banner depicting him as they react following the results of the exit polls in Israel’s general elections at Netanyahu’s Likud party headquarters in Jerusalem

By Jeffrey Heller and Stephen Farrell

With final results not due until later in the week, the forecasts indicated that even Netanyahu’s stewardship of a world-beating COVID-19 vaccination rollout – a showcase of his campaign – may not have been enough to propel him to victory.

Initial projections by Israel’s three main TV channels after Tuesday’s voting gave Netanyahu, leader of the right-wing Likud party, an edge, based on the potential support of an ultranationalist rival, Naftali Bennett, once his defence minister.

But amended forecasts indicated deadlock even with Bennett’s prospective backing, with a parliament divided equally between Netanyahu’s likely opponents and supporters.

Israel’s opposition made a better showing than expected, and support for Likud dipped, exit polls showed, after Netanyahu’s critics highlighted corruption charges against the country’s longest-serving leader and accused him of mishandling the pandemic.

On social media, Netanyahu claimed a “huge victory” over the group of left-wing, centre and rightist parties trying to unseat him – even as the TV projections failed to bear that out.

He did not repeat the claim in an election night speech at a Likud rally, saying only that its projected number of seats in parliament, around 30, was “a great achievement” – it took 36 in the previous election – and that he hoped to form a “stable right-wing government”.

Unless coalition-building talks, which have followed every election Israel has held since its creation in 1948, break a stalemate, a fifth national ballot could ensue.

Whether he could tip the balance will depend on final results. Bennett, seemingly a natural partner for Netanyahu, said he would wait until they were in before announcing any political moves.

An alliance between Bennett, 48, who favours annexing parts of the Israeli-occupied West Bank, and Netanyahu’s opponents to the left seemed to be a political stretch.

During the campaign, Bennett said he would not serve under an anti-Netanyahu bloc’s most likely leader, 57-year-old Yair Lapid, head of the Yesh Atid party.

According to the exit polls, Yesh Atid took second place with 17 to 18 parliamentary seats, versus 30 to 31 for top finisher Likud.

A Netanyahu government with Bennett and a clutch of other ultranationalists on board would result in one of the most right-wing governments in Israel’s history.

It would likely be at loggerheads with the administration of U.S. Democratic President Joe Biden over issues such as Palestinian statehood and engagement by Washington with Israel’s arch-enemy Iran over Tehran’s nuclear programme.

Netanyahu had campaigned on his leadership credentials based on a drive that has enabled nearly 50% of Israelis to receive two vaccine shots already.

But charges of bribery, fraud and breach of trust, which Netanyahu has denied in an ongoing corruption trial, as well as economic strife Israelis suffered during three nationwide coronavirus lockdowns, have weighed on his popularity.

“At the same time, if Bennett joins his coalition, Netanyahu is closer than ever to a narrow government including the most extreme elements of Israeli society,” Plesner said.

The dominant political figure of his generation, Netanyahu, 71, has been in power continuously since 2009. But the Israeli electorate is deeply polarised, with supporters hailing him as “King Bibi” and opponents holding up placards calling him “Crime Minister”.

Israel’s swift vaccine drive allowed it to reopen much of its economy before the election, and Netanyahu had promised voters and businesses more cash stipends and millions more doses of vaccine.