Myanmar has detained an employee of George Soros’s philanthropic foundation and frozen its bank accounts in the country, in what observers said was part of a push to accuse deposed leader Aung San Suu Kyi of promoting foreign interests.

Phyu Pa Pa Thaw, Open Society Myanmar’s finance director, is in custody and police are looking to arrest and interrogate another nine staff and two board members, according to the billionaire philanthropist’s foundation.

The state-owned Global New Light of Myanmar this week accused the group of financial misconduct, alleging it withdrew cash after last month’s military coup “without following the necessary rules and regulations”. The paper published a picture of Aung San Suu Kyi meeting Soros in New York in 2016, and listed several other meetings involving the two or Alexander Soros, his son, in Myanmar and the US. It said that OSM’s finance director was “being interrogated since 12 March 2021”.

Soros’s Open Society Foundations rejected the accusation that it had broken the law, saying it was “alarmed” to hear that authorities were seeking to interrogate staffers. The group said its Yangon offices had been raided and sealed.

“Claims of financial misconduct against OSM staff are completely false with no legal basis, and we call for the immediate release of OSM’s finance manager Phyu Pa Pa Thaw,” Binaifer Nowrojee, the group’s vice-president for organisational transformation, told the Financial Times. “The military is wrongfully pursuing staff members who have done nothing wrong and have, in fact, spent years working to improve healthcare, education and more for the people of Myanmar.”

She added: “These false allegations are evidently an attempt to distract from what is really happening and to discredit those who wish for a return to peace and democracy in Myanmar.”

The crackdown on Soros’s operations comes as Min Aung Hlaing’s military regime seeks to build a case against Aung San Suu Kyi, who has been arrested and accused of illegally importing walkie talkies, receiving gold and cash, and other alleged crimes. Members of her National League for Democracy party say the charges were fabricated with the aim of barring the popular 75-year-old leader from running for office.

The regime is facing growing condemnation and a threat of sanctions for overturning of the 2021 election, the imprisonment and use of lethal force against protesters, NLD figures and others. At least 217 people have been killed and 2,191 arrested since the coup, according to the Assistance Association for Political Prisoners (Burma), a human rights group.

The junta is also confronting increasing pressure on Myanmar’s banking system, which has been paralysed by a cash crunch and staff strikes. Many individuals, companies, and organisations rushed to withdraw money in the days after the coup to maintain operations.

Nikkei Asia, the publication produced by the owner of the Financial Times, this week reported that the regime had issued an order targeting OSM, Oxfam and two other non-governmental organisations, which requested that all banks holding any of their accounts audit them and hand over the details. Oxfam declined to comment. 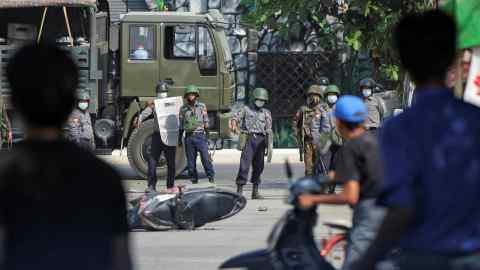 “This may now spread to other NGOs, including those that were close to Aung San Suu Kyi or her government,” said Yanghee Lee, the UN’s special rapporteur on human rights in Myanmar from 2014 to 2020. “Many of them have been very quiet because they are afraid of being targeted now that we see OSF being treated like this.”

Soros is a global hate figure among conservative and populist critics in countries ranging from his native Hungary to Israel and the US. His philanthropic organisation has been active in Myanmar since the 1990s, and set up a local foundation in 2017, when Aung San Suu Kyi was in power. OSM worked in a range of areas including human rights, education, drug law reform and scholarships.