At the start of this month, an Israeli chief executive named Udi Ben Shimol logged on to a video call with bosses from cities across Europe who all wanted to ask him one thing: What’s it like when life starts returning to normal?

In other words, what is it like in the country that has become the world’s Covid-19 vaccine superstar?

Yet Ben Shimol is just one of a number of people I have spoken to recently who bear sobering tidings from the leading edges of the pandemic.

Their impressions are just snapshots, but they suggest a need to be ready for anything, because even a successful vaccine rollout can have side-effects.

Ben Shimol runs the Israeli division of Sodexo, the French catering group, and almost 60 per cent of his staff have already had two shots, which is just as well since client demand is picking up. But he has a problem: 250 of his 1,800 employees are still on a government furlough programme that was last year extended until June 2021 and they are not keen on coming back. 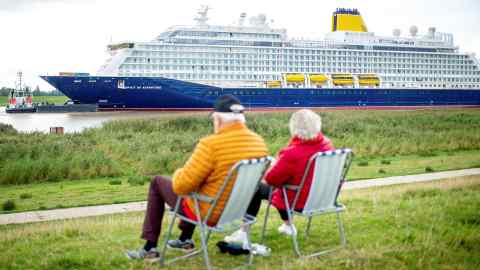 “No one thought the vaccination process would go so smoothly,” he said. “I need employees to come back to work, but they do not want to come while they are getting money without working.”

Those who are back have had to cater for some unexpected client demands.

Ben Shimol was surprised when one customer ordered buffet-style food for the staff canteen, plus less tempting packed lunches. It turned out that workers were only allowed to eat inside if they had one of the “green passports” Israel has introduced for the fully vaccinated, or those presumed to be immune after recovering from Covid. The unvaccinated had to take their packed lunch outside.

Some employers have told jabless staff to stay away from the office entirely. As a last resort, workers who declined a shot could be fired according to a legal opinion that Ron Tomer, president of the Manufacturers Association of Israel, told me his association had commissioned.

But what of the 130-plus countries that, as of last month, had yet to administer a single dose?

Unilever, the consumer goods group, operates in 100 of them, its chief human resources officer, Leena Nair, told an FT conference last week. And although about 36 of its 265 offices around the world have now reopened, many of them in the Asia-Pacific, Nair says working life is often not what it was.

“Social banter in the office has more or less stopped. There’s no water cooler moment; there’s no coffee break moment,” she said. “People are sitting two metres apart. It’s not that joyous an experience coming to work.”

Happily, working life is more cheering for some in Covid-quashing Australia, which last Wednesday reported no new local cases for the 12th day in a row.

“We don’t wear masks, there’s no 2m rule, there’s plenty of water cooler chat, it feels normal,” one friend said on the phone as she walked to catch a train to work in Sydney last week.

The train was the only place she had to wear a mask, she said, adding she had just been to a business conference, in person, with several hundred people.

But the allure of remote working remains a headache further south in Melbourne, where just 24 per cent of workers have so far returned to the city centre, according to the Property Council of Australia.

To reel them back, the council is lobbying for “Fab Fridays”: free public transport and 4pm knock-offs from work to bring the city’s buzz back.

I have no idea if this will catch on, in Australia or anywhere else. But I doubt I am the only one hoping that where Melbourne goes, the rest of the world will soon follow.

What is Cryptojacking? – Definition and Explanation

Myanmar artist Htein Lin: ‘We thought revolution was like a Hollywood movie’