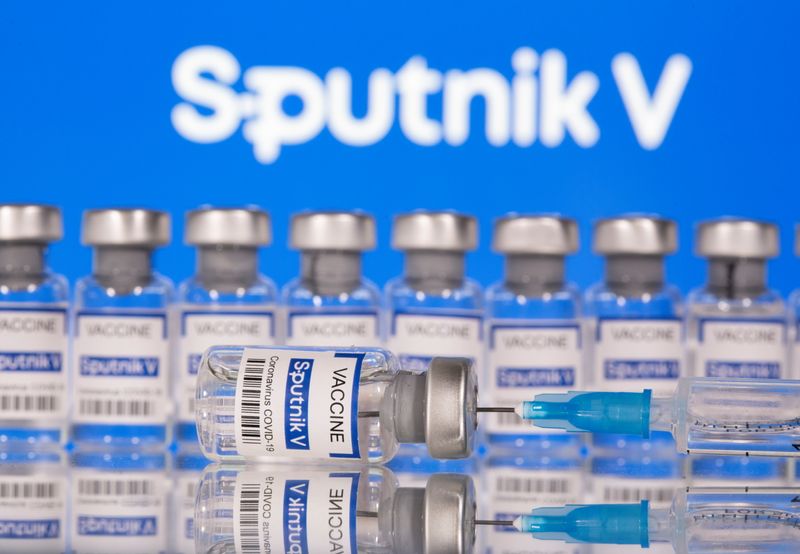 © Reuters. Vials labelled “Sputnik V Coronavirus COVID-19 Vaccine” and a syringe are seen in front of a displayed Sputnik V logo, in this illustration photo

BENGALURU (Reuters) – Gland Pharma Ltd said on Tuesday it had struck a deal with the Russian Direct Investment Fund (RDIF) to make up to 252 million doses of the Sputnik V COVID-19 vaccine, bringing India’s total production of the shot to at least 352 million.

Shares of Gland Pharma, which is backed by China-based Shanghai Fosun Pharmaceutical Group Co Ltd, surged as much as 9.5% to hit a record high of 2,783.85 rupees.

India’s Hetero already has a deal in place to produce over 100 million doses of the vaccine, which has proven to be 91.6% effective against COVID-19.

Sputnik V, developed by Moscow’s Gamaleya Institute, has been approved in 22 countries, with the RDIF signing supply deals with over 13 countries.

Indian drugmaker Dr.Reddy’s Laboratories Ltd has also been holding small clinical studies of Sputnik V domestically. It had sought emergency use approval for the vaccine last month, but India’s drug regulator had asked for more data.

Production is expected to begin in the third quarter at its facilities in Hyderabad, with deliveries estimated in the final quarter of the year, Gland Pharma said in a statement. It did not specify which countries it would supply the doses to.

Gland Pharma also said it would explore more deals for the vaccine.

India, the world’s biggest vaccine maker, has so far given emergency use approval to AstraZeneca (NASDAQ:) Plc’s shot and a homegrown vaccine made by Bharat Biotech. It has donated or sold vaccines to more than three dozen countries, while significantly ramping up its own inoculation program this month.

European Union (EU) governments are considering launching talks with Sputnik V developers as the EU tries to get its vaccination program back on track, EU diplomatic and official sources have told Reuters.

Final Fantasy 7: Ever Crisis Will Be Free-To-Play, Supported by Loot Boxes