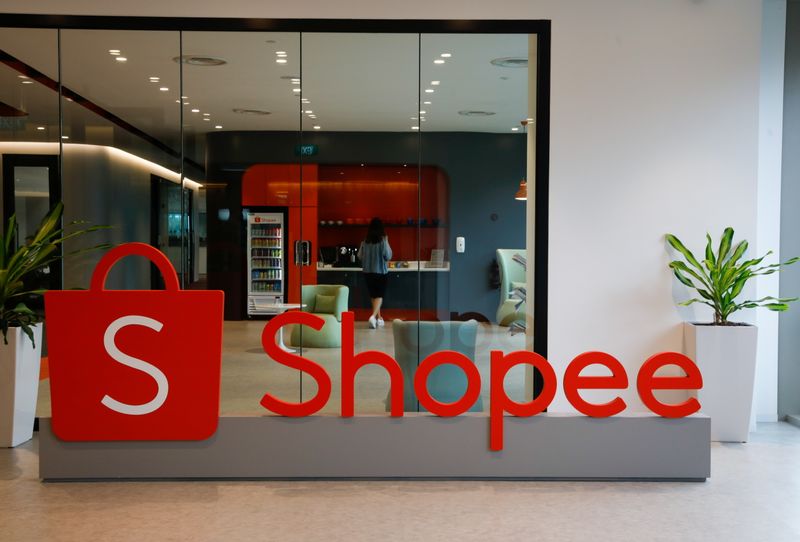 © Reuters. A signage of Shopee is pictured at their office in Singapore

By Fanny Potkin and Anshuman Daga

SINGAPORE (Reuters) – In front of an open-air Jakarta restaurant, delivery drivers clad in the orange colours of Southeast Asia tech group Sea Ltd wait for orders next to the green-jacketed riders of market leaders Gojek and Grab, in what has become the latest battleground for tech supremacy in Southeast Asia.

The humble noodles eatery signed up for Sea’s nascent ShopeeFood service a month ago, but “immediately, there were orders everyday,” said manager M.A Rasyid.

Riding on the success of a cash-generating gaming business, U.S.-listed Sea has invested heavily in its Shopee e-commerce brand and successfully taken on Alibaba (NYSE:)’s Lazada and other rivals in recent years. Its share price has risen five-fold over the past year, giving the company a market capitalisation of $111 billion.

Now Singapore-based Sea is muscling into food delivery and financial services in Indonesia, the world’s fourth-most-populous country, posing a new threat to regional rivals including ride-hailing and delivery unicorns Grab and GoJek.

At stake is a slice of the more than 400 million internet users in Southeast Asia’s digital economy, which is estimated to triple to $309 billion by 2025, according to a study by Google (NASDAQ:), Temasek and Bain & Company.

Sources say Sea’s aggressive expansion is one of the key sources driving merger discussions between Gojek and e-commerce platform Tokopedia. The two Indonesian firms aim to create an $18 billion powerhouse to fight off Sea and regional ride-hailing leader Grab.

Meanwhile, Grab and other players, including travel app Traveloka and Indonesian e-commerce unicorn Bukalapak, are rushing for public listings, hoping to ride the coattails of Sea’s stock rally while defending their turf, according to Reuters interviews with over a dozen people.

“Sea is like Thanos, massive and powerful, and able to take down half of the world, or in this case half the startups,” Willson Cuaca, co-founder of East Ventures and an early backer of Tokopedia, joked as he compared the group to the powerful villain in the Marvel film series.

“Like the Avengers, companies need to band together if they want to ensure their survival and to win the war.”

Sea’s stock rally reflects a scarcity of options for investors seeking exposure to the booming Southeast Asia internet sector. It went public in 2017 and has raised some $7 billion in share and debt sales, with early investor Tencent now holding about 20% of the stock.

That investor appetite, combined with a need to raise cash to match Sea’s muscle, is forcing rivals to seek public listings as quickly as they can, bankers and executives familiar with the matter say.

Sources say the Gojek-Tokopedia merger, which is likely to be finalised within weeks, will be followed by a listing in Jakarta in the second half of 2021, then a mega IPO in the United States targeted for 2022.

Grab and Traveloka, for their part, are looking at speeding up the process by merging with special purpose acquisition companies, sources said. Bukalapak is planning the same, after a 2021 Jakarta IPO.

“The market is pretty welcoming for tech stocks. It’s an opportunity for Grab if they are ready for it,” said Jixun Foo, a managing partner at GGV Capital, which has invested in Grab.

Sea’s success owes much to its online gaming business Garena, whose 2017 title Free Fire became the most downloaded game in the world over the past two years.

It’s using the cash from Garena to repeat its success in e-commerce, food delivery and financial services.

Its Shopee division started off in 2015 as a platform for local sellers and soon gained traction with many merchants regionally. It has now overtaken both Lazada as the top e-commerce player in the region and Tokopedia as the leader in Indonesia, thanks in part to innovations such as adding social features to its service.

Both Gojek and Grab, which have pursued on-again, off-again merger talks with each other for years, believe they can ward off Sea’s move into food delivery thanks to well-honed logistics networks and early-mover advantages.

But they could be hard-pressed to match Sea’s subsidies: in Vietnam, Sea-owned food delivery service Now quietly dominates the sector, according to a January report by advisory firm Momentum Works.

In Indonesia, ShopeeFood is wooing vendors by touting its 80 million-strong user base and promising to subsidise steep discounting.

The next showdown will be in financial services.

Sea has bought Indonesian lender Bank BKE and has hired a veteran of China’s peer-to-peer platforms to head its “SeaMoney” banking efforts.

“After payments, they have the vision and will to grow into adjacent areas, from ‘buy now, pay later’ on the customer side to merchant credit and all sorts of financial services.”

But Tokopedia and Grab, both of which own part of Indonesian payment app OVO, have similar ambitions. And Sea and Grab are set to square off in Singapore, where both won coveted digital bank licences in December.

Grab is backed by many investors including SoftBank Group and Mitsubishi UFJ (NYSE:) Financial Group.

“This is going to be a battle of the titans,” said Patrick Walujo, the co-founder of Indonesian private-equity firm Northstar Group and a Gojek investor.