Forty-seven Hong Kong democracy activists were charged last week with subversion against the Chinese state for attempting to win an election. This week, China’s parliament ensured that they would never participate in another one.

The intervention by the National People’s Congress marked the second time in 10 months that Xi Jinping’s administration has imposed radical legislation on Hong Kong through an effectively secret process. As with a national security law last year, it will be weeks before the full provisions of a new election law authorised by the NPC on Thursday are fully revealed.

Its outlines, however, are clear. Xi, China’s most powerful leader since Mao Zedong, has dramatically reduced the scope of the former British colony’s autonomy, which was supposed to be guaranteed for 50 years after its 1997 handover under a “one country, two systems” principle.

“We must improve the [election] system to ensure that Hong Kong’s organs of political power are firmly in the hands of real patriots,” Xia Baolong, who runs the Chinese government office responsible for Hong Kong matters, said before “the 47” — as they are known — were arraigned en masse. Only five of them have been released on bail.

The remainder, including student activist Joshua Wong and academic Benny Tai, will probably remain behind bars for the duration of what is likely to be a lengthy trial.

To Xi, the idea of ‘free and fair’ is a complete irrelevance. What matters is stability and power

Bing Ling, a professor of Chinese law at the University of Sydney, said that Beijing wanted the trial to have a “chilling effect”, by showing that “it is now legally perilous to engage in overt political opposition in Hong Kong”.

The election law will empower a pro-Beijing “election committee” to nominate all candidates for the territory’s legislature as well as directly appoint “a relatively large share” of the chamber. Previously, half of the Legislative Council’s seats were chosen through open nominations and direct elections. According to people briefed on the law, only 20 to 30 per cent of Hong Kong’s lawmakers will be directly elected in the future.

Just as the national security law revealed much about the Chinese Communist party’s paranoid world view, which insists that “hostile foreign forces” are sowing chaos across Hong Kong, the new law is a stark illustration of what it considers to be democratic, free and fair elections.

“The party tolerates political pluralism and the institutions of electoral democracy only insofar as they are supportive of its grip on power,” said Jude Blanchette at the Center for Strategic and International Studies in Washington.

“As soon as Beijing views its authority as being challenged, it will respond without any sense of compunction. To Xi, the idea of ‘free and fair’ is a complete irrelevance. What matters is stability and power.”

Even Bernard Chan, the pro-establishment head of a committee that advises Carrie Lam, the chief executive, told Hong Kong’s public broadcaster “it’s a pity that we have probably gone back to where [political development was] in the early days after the handover”.

The regression, he added, was necessary to “give confidence to the central government that ‘one country, two systems’ could carry on”.

A Chinese academic who advises the government on Hong Kong affairs and asked not to be named said, “Hong Kong used to sit on the lap of the west, transferring resources from the entire world to China”.

“Hong Kong made a lot of money and benefited a lot,” the academic added. “But from the perspective of Beijing, the hope now is that Hong Kong will sit on China’s lap as we explore the world together.”

Beijing officials and local prosecutors, armed with the draconian provisions of the national security law, alleged that the 47 democracy activists on trial for subversion had “conspired” to win a majority in the territory’s legislature “to grab the power to administer Hong Kong” in an election planned for last year, which was postponed.

Their aim, prosecutors added, was to “indiscriminately refuse to pass any budgets . . . regardless of their contents or merits”, and ultimately force Lam to resign. Under Hong Kong’s Basic Law, or mini-constitution, Lam would have to step down if the budget was rejected twice by the Legislative Council.

Lam has been deeply unpopular since she attempted to pass a contentious extradition bill two years ago that would have allowed Hong Kong residents to be extradited to China, triggering a mass protest movement. While the extradition bill was withdrawn, the NPC trumped it last year with the national security law. 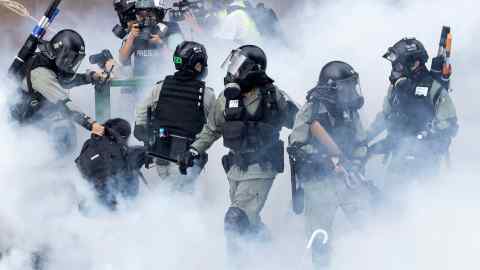 The subversion trial has highlighted how some mainland legal practices now supersede Hong Kong norms in national security trials, such as the previous presumption of bail for most defendants. Crowded bail hearings for the 47 stretched late into the night, most of them in vain.

The eight activists released on bail by Saturday have to adhere to strict conditions, such as refraining from making any public political statements. In the run-up to the mass arrests, Xia denounced Wong and Tai as “vile anti-China elements”.

Emilia Wong, the girlfriend of defendant Ventus Lau, observed that the bail conditions would render those released pending trial “basically dead” in the public domain, and wondered why the others had been kept in detention.

“What are the authorities afraid of?” she asked. “Can dead people still endanger national security?”

Covid jabs are at the sharp end of political risk