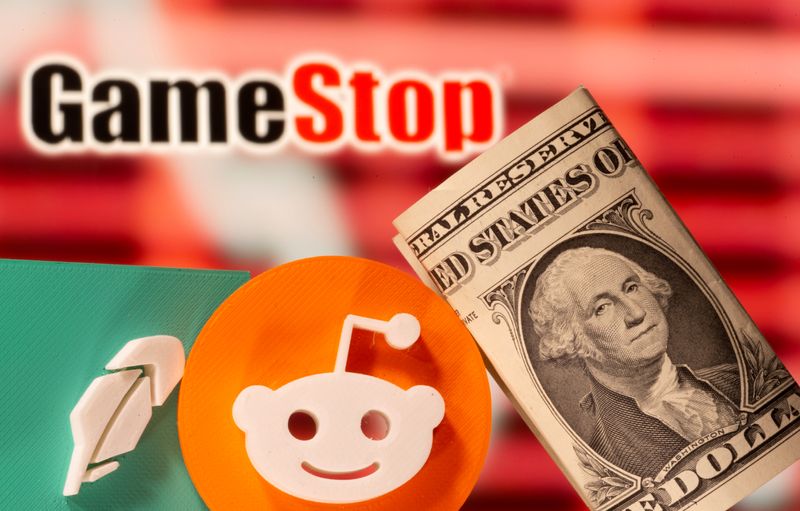 © Reuters. FILE PHOTO: A 3d printed Robinhood and Reddit logos are seen near one dollar banknotes in front of displayed GameStop logo

(Reuters) -Shares of Reddit-favorite GameStop Corp (NYSE:) fell nearly 14% before the bell on Wednesday, after the videogame retailer said it could cash in on a meteoric rise in share price to fund its e-commerce expansion.

GameStop has surged nearly 900% so far this year and at the peak of the trading frenzy they had touched $483 a piece. The shares were last down at $156.99 after the company reported a ninth straight decline in quarterly sales.

GameStop skipped a question and answer session after the results, but said it will close more retail stores and exit unprofitable businesses, underscoring Wall Street’s concerns about its business.

Wedbush analysts downgraded the stock to “underperform” from “neutral”, saying the short squeeze has boosted the share price to levels that are completely disconnected from the fundamentals of business.

Billionaire investor and Chewy (NYSE:).com co-founder Ryan Cohen, who is part of GameStop’s board, expects to transform the retailer into an e-commerce firm that can take on big-box players Target Corp (NYSE:) and Walmart (NYSE:) Inc and technology firms such as Microsoft Corp (NASDAQ:) and Sony Corp (T:).

“Our downgrade is not a reflection of our opinion of company management, which remains very high; rather, it appears that the ‘real’ value of GameStop shares vastly exceeds the ‘fundamental’ value,” Wedbush analysts said in a research note.

GameStop said on Tuesday it has been considering since January whether to increase the size of the $100 million share sale that it had originally announced in December.

The company had then decided against the move as it was restricted under U.S. financial regulations from selling shares because it had not yet updated investors on its earnings.

The stock sale program was assigned to Jefferies (NYSE:), whose brokerage arm on Wednesday raised its price target by a whopping $160 to $175.

This is much higher than the median price target of $25, according to Refinitiv data, and for the first time matches GameStop’s current trading levels.