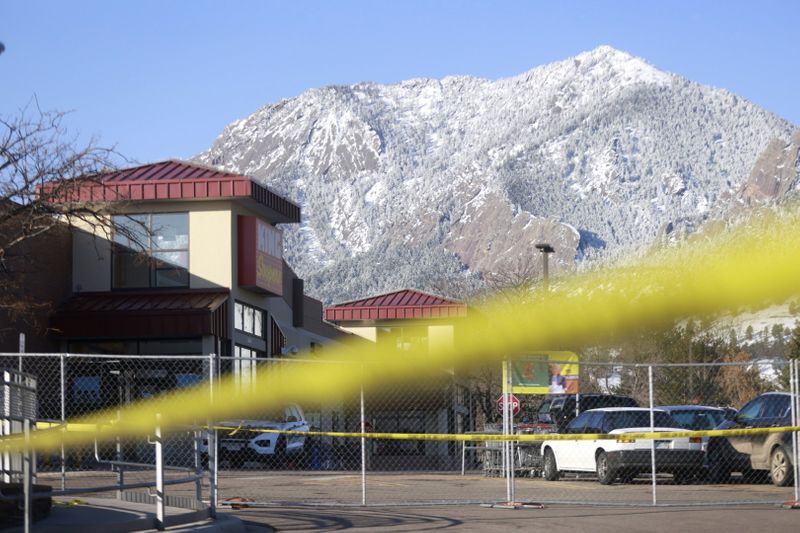 By Alexandra Ulmer and Sharon Bernstein

(Reuters) – The staff at a Colorado King Soopers grocery store found themselves targeted by a mass shooter this week, after a year in which they faced the coronavirus pandemic as front-line workers.

Three – Teri Leiker, 51; Rikki Olds, 25; Denny Stong, 20 – were among the ten people killed on Monday when a gunman opened fire inside the Boulder store.

The trauma came after a year in which five unionized Colorado grocery workers died of COVID-19, according to Kim Cordova, the United Food and Commercial Workers Local 7 president. She said families believed they had caught the virus at work.

Across the United States, supermarket employees have had to reckon with customers refusing to wear masks, crowding, panic buying, and additional cleaning requirements.

With the vaccine rollout picking up, for some the grueling last year had finally started to recede into memory.

“I got my shot last week. It’s so much hope to get your shot. It’s a new deal. A new beginning,” said Darcey Lopez, 46, a manager at the Murray’s Cheese concession at the now-closed Boulder King Soopers.

“And then some idiot comes into our store and shoots up the place.”

During the shooting, Lopez climbed into a cabinet beneath her cheese stand counter to hide. “We’ve been through so much this last year and it was just the icing on the cake,” she said.

A 21-year-old suspect, Ahmad Al Aliwi Alissa of the Denver suburb of Arvada, has been charged with 10 counts of murder and one attempted murder charge.

Cincinnati-headquartered Kroger (NYSE:) Co, the parent company of King Soopers, said in Twitter posts this week that it was “horrified” by the killing and was supporting its workers, some of whom were involved in “truly heroic acts”.

It has said the store will remain closed during the police investigation.

The company declined Reuters’ request for further information, including about its assistance to surviving employees, and whether it was reviewing its security protocol.

“We want them to put safety first, that they have armed guards at these stores,” Cordova said.

She also said Kroger’s pandemic measures had been insufficient, with workers provided inadequate protections, and that supermarkets were reluctant to enforce mask mandates to avoid losing customers, even if that put workers’ lives at risk.

Kroger implemented a so-called “hero bonus,” a $2 addition to its standard base pay rate, between March 29 and May 2020. In March 2020 it also announced a $300 bonus for full-time associates and $150 for part-time associates.

Other supermarket chains initially provided similar benefits, but a November report by the Brookings Institution said pay for front-line workers at 13 major retailers had increased by an average of just $1.11 per hour since the start of the pandemic.

“The decisions by the companies we analyzed to end hazard pay well before the pandemic was over undermine the pledges that many of these same companies made to invest fairly in workers,” said the report.

Cordova said Kroger, which has said sales last year rose 8.4% to a record $132.5 billion, should do more to protect their employees.

“They’ve made eye-popping profit during this pandemic,” she said.

Nationally, UFCW says 155 grocery workers have died of COVID-19, and at least 34,700 were infected or exposed.

Kroger employs some 23,100 people in Colorado, according to its website. UFCW represents 32 workers at the King Soopers in Boulder, which is near the University of Colorado’s flagship campus and about 28 miles (45 km) northwest of Denver.

Cordova said the union has been helping employees who survived the shooting plan their future work, arrange mental health counseling and how to retrieve personal items, including from their cars.

“When they ran, they never went back,” she said.