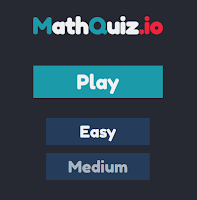 MathQuiz.io is a new math game developed by a student. It’s a relatively simple site that presents you with a series of math problems to solve in your head then enter an answer. The problems are presented in sets of ten consecutive questions. You can play in an “easy” mode which is mostly simple addition, subtraction, and multiplication or you can plan in the “medium” mode which incorporates problems with fractions, division, and negative numbers.

MathQuiz.io doesn’t require players to sign-up or log-in. There isn’t any advertising on the site. It’s just a simple site that students can use to practice their math skills. It’s the kind of site that is handy to link to a class website or LMS under the heading of “things to do with extra time.”

Why Do Our Clocks Spring Forward Next Weekend?

Bosch looking to smart devices to get ahead in the cloud