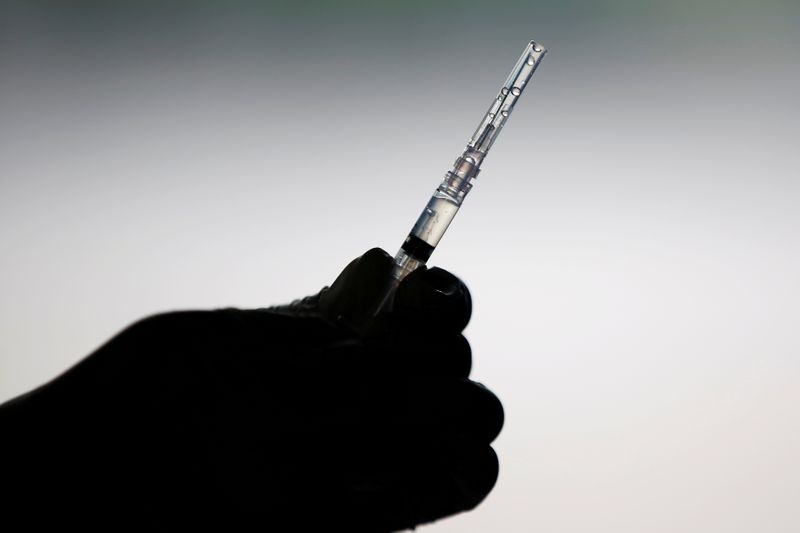 BEIJING (Reuters) – China aims to vaccinate at least half a billion of its people against COVID-19 in four months, a challenge that will test the country’s formidable industrial might just as it accelerates efforts to help inoculate the rest of the world.

Reuters calculations indicate China could ramp up capacity enough to vaccinate the world’s biggest population and hundreds of millions beyond, in dozens of countries from Africa to Latin America.

But little is known about how fully the three approved domestic manufacturers are using their capacity – a lack of information that leaves a huge question mark over global efforts to end the pandemic that began in central China.

“It is important for the public to have an understanding of what the government is doing, what the private industry is doing, how fast or slowly they are doing,” said U.S. researcher Jennifer Pancorbo.

More precise production data that help people get some sense of whether shots will be available in May or July will affect how people plan their return to normal life, said Pancorbo, director of industry programmes and research at North Carolina State University’s Biomanufacturing Training and Education Center.

China got an early start, invoking emergency-use authorisation for vaccines in July. But it has inoculated less than 4% of its population, far behind such countries as Israel, Britain and the United States, as it largely focussed on preventing transmission.

Now Beijing is shifting gears, aiming to inoculate 40% of its 1.4 billion people by the end of June.

With 65 million doses administered as of Sunday, China needs to average around 4 million shots a day to meet that target.

Vaccine developers’ statements suggest manufacturers could reach an annual capacity of 3.6 billion doses by the end of the year, according to Reuters calculations: 3.1 billion doses of the three approved vaccines that require double injections and 500 million single-dose shots.

That would be enough to vaccinate China’s entire population eventually and honour its commitment to supply at least 463 million doses overseas through donations and exports.

But none of the makers of the approved vaccines – China National Pharmaceutical Group (Sinopharm), CanSino Biologics Inc (CanSinoBIO) or Sinovac Biotech Ltd – has detailed how many doses they are producing after their latest scale-up.

“Chinese vaccine manufacturers are still expanding, and with the continuous release of production capacity, the output will gradually increase,” Tian Yulong, an official with the Ministry of Industry and Information Technology, told a news conference on Monday.

He declined to disclose China’s vaccine production rate or supply levels, when asked by Reuters.

Even if they have enough capacity ready, if disruptions in the supply of raw materials and key components occurred, they probably could not run their factories at full speed, experts caution.

“All the vials, boxes, syringes, needles, all that stuff, where does it come from?” said Harris Makatsoris, professor of sustainable manufacturing systems at King’s College London, “The question is these companies – do they have sufficient capacity, because they serve the internal market as well as the global market?”

Sinovac said in early February that its capacity to make finished products lagged behind its bulk production capacity, but overseas partners could help fill bulk vaccine into vials and syringes.

A Sinovac spokesman told Reuters it does not expect a shortage of vials and would be able to quickly expand production if China or other countries accept a larger vial that can hold multiple doses of its vaccine.

Unlike AstraZeneca (NASDAQ:) PLC, which puts 10 doses in a vial and Pfizer Inc (NYSE:), which uses five, Sinovac uses a single-dose vial or syringe.

Sinopharm and CanSinoBIO did not reply to Reuters requests for comment.

Drugmakers worldwide are struggling, as they run flat out to meet the unprecedented demands from competing countries at record speed.

Gao Fu, head of the Chinese Center for Disease Control and Prevention, thinks China has sufficient production capacity to meet its goals, but cautions that translating capacity into products that meet standards is complicated.

Before starting mass production, a newly built line needs to go through test runs and fine-tuning that could affect the production schedule, making it difficult to disclose precise production rates.

“You may produce a batch and it doesn’t meet the requirements, and then you have to do it again, make a change to something,” said Zoltan Kis, an Imperial College London researcher specialising in vaccine manufacturing. “This is the same everywhere in the world, not only in China.”

“Companies have consistently overestimated their ability to produce and deliver vaccines,” partly because a scarcity of information makes it hard to estimate supply, said Jerome Kim, director general of the nonprofit International Vaccine Institute.

While China has other challenges to address in its vaccination campaign, Kim said he would “worry first about supply, then about delivery and finally acceptance.”