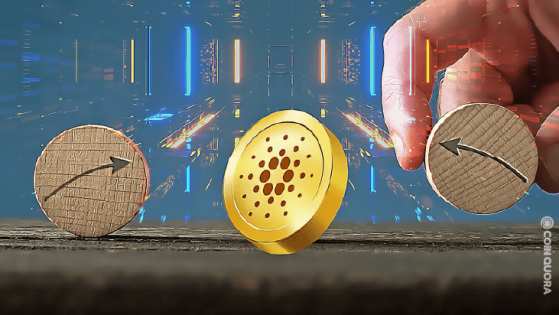 According to recent reports, Cardano (ADA) has added to the Bloomberg Terminal. The platform is utilized by expert traders. Consequently, this will expose ADA to a new wave of potential investors.

A few days before Bloomberg Terminal added Cardano, Galaxy Digital CEO Mike Novogratz asked whether his Twitter followers could make a bull case for ADA. “Does anyone build on it? Use it? Why is the market cap so high?” he wrote, adding, “Should it be a funding asset? It’s one of the few cryptos I haven’t traded in my life.”

Cardano is a peer-reviewed blockchain that utilizes the native token ADA. Despite the news, ADA is still following the broader crypto market’s downtrend. The token has fallen by almost 5% in the last 24 hours and 9.5% in the previous seven days.

According to Coinmarketcap, ADA ranks fifth by market cap among all cryptos with a total cap of $32 billion.

The Cardano roadmap is classified into five eras: Byron, Shelley, Goguen, Basho, and Voltaire. The Goguen phase aims to enable Cardano users to create and execute smart contracts on the ADA network. The phase recently started with the Mary hard fork.

In addition, Cardano has received investments from the likes of FD7 Ventures. FD7 Ventures has set aside $250 million to fund companies that are building solutions on Cardano and Polkadot.

Of note, the venture fund said it is bullish on the growing non-fungible token (NFT) industry. Thus, the firm decided to support companies building on platforms that enable decentralized finance (DeFi) solutions.

This article first published on coinquora.com