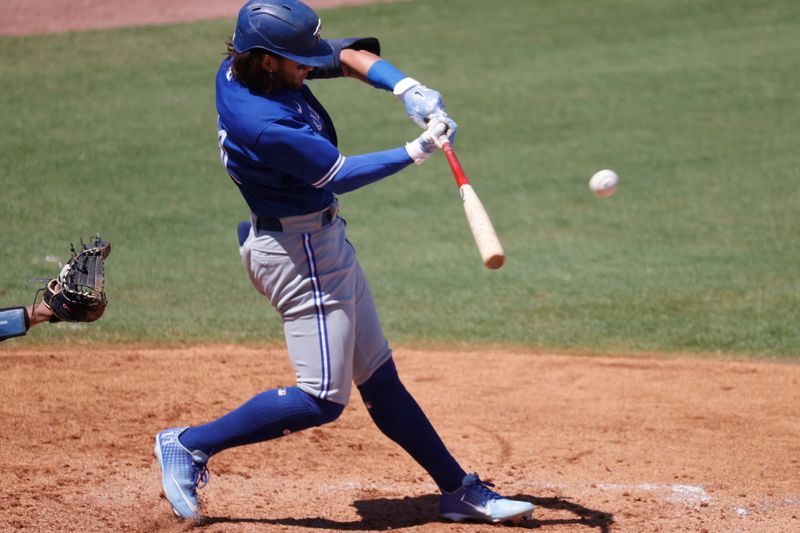 Bichette hit solo shots in the first and fifth innings for Toronto’s first and final runs on a 3-for-3 afternoon.

Most of the damage came against Yankees right-hander Deivi Garcia, who allowed four runs and seven hits in three innings. Gary Sanchez and Brett Gardner had two hits apiece for New York.

Miguel Cabrera and Jeimer Candelario each had two hits and Robbie Grossman homered as Detroit beat Philadelphia in Lakeland, Fla.

Right-hander Ivan Nova, a longshot for a spot in the Phillies’ rotation after pitching for the Tigers last season, gave up four runs and 10 hits in five innings.

Joey Wendle and Willy Adames each stroked their first home runs of the spring as Tampa Bay held on to beat Minnesota in Port Charlotte, Fla.

Andrelton Simmons, Ryan Jeffers and Trevor Larnach each hit homers for the Twins.

Pittsburgh got home runs from Adam Frazier and Nick Gonzales in a comeback win over Atlanta in Bradenton, Fla.

Austin Riley knocked in all three Braves runs on a pair of home runs.

Sean Murphy doubled, homered and drove in three runs to lead a 13-hit attack as Oakland blew out Chicago in Phoenix.

Tim Anderson had two hits for the White Sox.

Hunter Dozier banged his fourth home run of the spring for the Royals.

Josh Fuentes had four RBIs, including a game-tying two-run double in a five-run fourth, as Colorado rallied to beat Milwaukee in Phoenix.

The Brewers got home runs by Kolten Wong and Travis Shaw, as well as a grand slam by Christian Yelich.

Hunter Renfroe provided the only offense with a two-run blast in the third inning as Boston shut out Baltimore in Fort Myers, Fla.

Houston came back from an 8-0 deficit after two innings as Carlos Correa had a home run, a double and three RBIs in beating Washington in West Palm Beach, Fla.

The Nationals hit four home runs: two by Ryan Zimmerman and one each by Josh Bell and Kyle Schwarber.

Protecting civilians from explosive weapons in conflict: 5 things you should know