The unsolicited offer by Blackstone followed a ruling by Australian regulators last month that Crown was not fit to operate a new A$2.2bn casino resort in Sydney because of concerns about money laundering and poor corporate governance.

Crown said on Monday that the buyout offer represented A$11.85 a share, or about a 19 per cent premium to the gaming group’s average stock price since it published its first-half financial results over a month ago.

Crown added that the bid was subject to due diligence, approval by Blackstone’s investment committees and a decision by Australian regulators that the US private equity group was a suitable entity to operate its portfolio of casinos in Sydney, Melbourne and Perth.

“The Crown board has not yet formed a view on the merits of the proposal. It will now commence a process to assess the proposal, having regard to the value and terms of the proposal and other considerations. It will also engage with relevant stakeholders including regulatory authorities,” said Crown in a statement to the Australian Securities Exchange.

Shares in Crown jumped 18 per cent to A$11.61 on Monday following the news.

If a deal can be agreed, it would mark a further push by Blackstone into the casino sector following its $4.25bn deal to acquire the Bellagio resort in Las Vegas from MGM Resorts International in October 2019.

Blackstone already owns 9.9 per cent of Crown and has been tipped as a potential acquirer of the company.

Packer, who owns 37 per cent of Crown and built the company into Australia’s biggest gaming group, will be pivotal to any agreement with Blackstone. However, analysts believed that there were signs he would be a willing seller because of the regulatory hurdles facing Crown and his own personal circumstances.

The billionaire resigned from Crown’s board of directors in 2018, citing mental health issues — a move that followed the arrest and conviction of 19 of the group’s employees in China. A recent report by a government-commissioned inquiry criticised Packer, saying his capacity to “remotely manoeuvre” operations must cease for the health of the company.

The report concluded that Crown was not fit to operate its flagship A$2.2bn casino in Sydney and that the company had unwittingly facilitated money laundering. 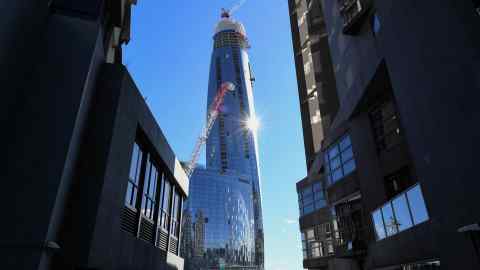 “The very serious problems of the infiltration of Crown subsidiaries’ accounts by organised criminals should send a shiver down the spine not only of any casino regulator but also the community generally,” said the report by Patricia Bergin, a former judge.

Crown accepted the resignations of five of its directors following the report. The company still faces two state government commissioned inquiries in Victoria and Western Australia in the coming months.

Kelly Amato, an analyst at Fitch Ratings, said a deal with Blackstone may help Crown address some of the issues highlighted by the report regarding Crown’s relationship with CPH, Packer’s private investment vehicle.

“Even though Crown has already terminated agreements with CPH and its representatives on Crown’s board have already resigned, we believe the removal of CPH as a shareholder will be viewed favourably by the regulators as it will provide a permanent break in the relationship,” she said.