When the Berliner Ensemble put tickets for their show Panic Heart on sale last week after a near-five month hiatus, they expected a good response. They did not expect to sell out in four minutes.

“It’s the first thing I’ve been able to look forward to since November,” said Thomas Stahnsdorf, one of the lucky few clutching tickets on Friday evening. “It’s a wonderful feeling.”

Berlin is one of the world’s great capitals of culture, with more theatres and opera houses per head of population than just about any other major European city. But they’ve all been dark since November, laid waste by the Covid-19 pandemic.

Directors and producers are feeling increasingly aggrieved. Why, they ask, can Berlin not follow the example of Madrid, which has kept its theatres, museums and galleries open despite the ravages of coronavirus?

Last month the city’s cultural elite decided to stop complaining and do something. Together with Berlin’s department of culture they came up with a pilot project allowing for a limited number of coronavirus-compliant performances. The scheme started on Friday night, with a showing of Panic Heart, an autobiographical play by the journalist and TV personality Benjamin von Stuckrad-Barre, and will run until April 4.

For an open society, culture is more than leisure, even if the government’s pandemic policies lump theatres and opera houses together with tattoo parlours and brothels

The initiative, which could pave the way for a broader reopening of cultural institutions in Berlin and elsewhere, is a novel one. With each €20 ticket bought online, customers get a free Covid-19 test, which must be carried out on the day of the performance. Only those with a negative result are allowed into the theatre, and medical masks must be worn throughout the performance.

Some of Berlin’s top venues are taking part in the pilot. Daniel Barenboim will conduct The Marriage of Figaro at the Staatsoper on April 2, while the Deutsche Oper will stage Zandonai’s Francesca da Rimini two days later. The Volksbühne will put on a premiere of Fritz Kater’s new play Come As You Are, while Dutch electronic musician Fatima Yamaha will perform at the Holzmarkt, a trendy concert hall in Berlin-Friedrichshain, next Saturday.

The move is an attempt “to run through how we can allow a controlled, hygienic return to cultural life”, said Klaus Lederer, Berlin’s minister for culture.

It comes at a time when all of Germany’s theatres and opera houses, which brought their curtains down at the start of the country’s lockdown a year ago, are craving relief. Berlin’s Gorky Theatre embodies the plight of the sector: it saw box office takings fall from €1.7m in 2019 to €500,000 in 2020. Like other houses, it is wary of making any kind of prediction for 2021.

Generous public subsidies mean Germany’s theatres have fared a lot better than their counterparts in other countries. Most were able to send regular staff on Kurzarbeit — short-time working — furlough schemes that shielded them from the impact of the shutdown.

But the many freelance performers who are the lifeblood of Berlin’s theatre landscape saw their incomes collapse. “They are getting a fraction of their normal wages,” said Reese. “I really worry about them.”

The government has provided handouts to creative artists, and authorities in Berlin have hired unemployed performers as staff in Covid-19 vaccination centres. But officials acknowledge that much of the cultural sector is facing an existential crisis.

That is why people like Lederer and the Berlin culture department are so eager to find a solution. “For an open society, culture is more than leisure, even if the government’s pandemic policies lump theatres and opera houses together with tattoo parlours and brothels,” he said.

For Reese, the pilot project has provided a glimmer of hope. The Berliner Ensemble, famously created by Bertolt Brecht and his wife Helene Weigel in 1949 and still one of Germany’s most illustrious theatres, stopped all rehearsals six weeks ago as the prospects for reopening began to dwindle. There seemed to be no point in preparing new shows when no one knew when they could be performed. 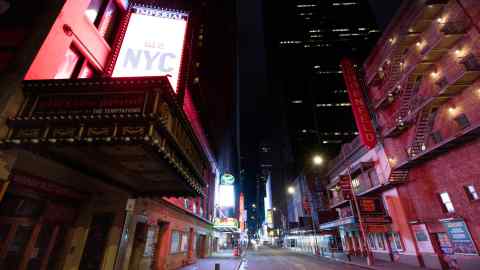 “A lot of [our actors] feel pretty disconsolate,” he said. “Everyone told us things will be better by Easter . . . but now Easter’s nearly here and there’s this feeling that things are only getting worse.”

The government signalled earlier this month that cultural institutions could reopen if the number of new coronavirus cases remained stable over a 14-day period. But the latest statistics are going in the opposite direction: infections are rising at an exponential rate and Germany seems to be firmly in the grip of the third wave of the pandemic.

“The audience will be able to lean back and relax and let their souls breathe deeply,” he said. “All behind an FFP2 protective mask, of course.”

Protesters across Australia vent their fury over rape allegations