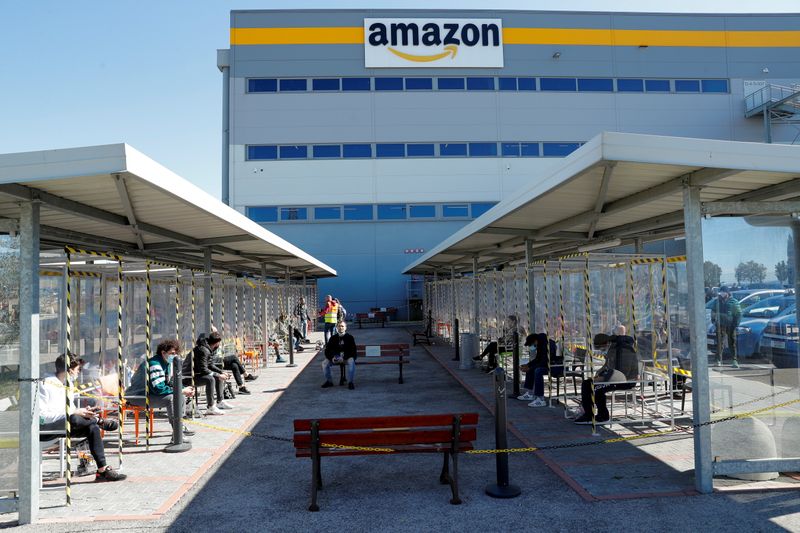 © Reuters. Workers relax during a break outside Amazon’s distribution centre in Passo Corese

Trade unions estimate Amazon’s delivery systems rely on 40,000 workers, including staff of its logistics arm, which employs most of Amazon’s 9,500 long-term Italian staff.

Elsewhere, Amazon is also facing a challenge at its fulfilment centre in Bessemer, Alabama, where workers are voting on whether to become the first employees to join a union at one of the largest employers in the U.S.

The Italian protest comes after an e-commerce surge, with goods sold online in 2020 rising by a record 31% to 23.4 billion euros, data from Milan’s Politecnico University shows.

This has prompted unions to seek tighter rules on workloads and shifts for drivers who they say deliver as many as 180-200 parcels a day.

Mariangela Marseglia, country manager for Amazon in Italy, said in a letter to customers that it put workers first, whether its own or contractors, and offered a safe and inclusive work environment, competitive pay as well as benefits.

Italy’s FILT-CGIL, FIT-CISL and Uiltrasporti unions called the strike after the collapse of negotiations with employers association Assoespressi which represent delivery firms.

Marco Odone of Uiltrasporti said protests were widespread across Amazon sites and preliminary estimates were of 70% to 75% observation of the strike action.

“These people make at least 100 stops a day each involving not one but often two or three parcel deliveries. Problems like a traffic jam or a road accident are unaccounted for.”

Unions had called on Amazon to enter talks, saying it was ultimately responsible for working conditions of drivers, even when they were employed by third parties.

Since it began operating in Italy a decade ago, the Seattle-based firm has opened more than 40 logistics sites as demand grew in a country lagging other EU states for e-commerce.

Last week, Amazon said it would invest 120 million euros ($143 million) in a new distribution centre near the northern city of Bergamo, hiring 900 staff with a permanent contract within three years.