Airline initial public offerings are taking off, fuelled by a jump in investor appetite for stocks expected to get a big lift from economic reopenings and an anticipated rebound in travel as Covid-19 vaccination programmes accelerate.

Investors on Wall Street sent shares of Apollo-backed Sun Country Airlines up more than 50 per cent in their debut on Wednesday, which came weeks after Norwegian start-up carrier Flyr listed in Oslo. It is shaping up to be one of the busiest two months in years for airline listings, with Frontier Airlines set to go public on the Nasdaq in the coming weeks.

Sun Country’s shares closed their first trading session at $36.38 on Wednesday, giving the company a market value of around $2bn. That was well above the $24 the shares were initially priced at on Tuesday and higher than the $21 to $23 range the Minneapolis-based budget airline had originally sought for its listing.

The offering was roughly 15 times subscribed, according to people familiar with the deal.

Both Sun Country and Frontier are going public after a challenging year. Frontier booked a net loss of $225m last year, after earning $251m a year prior. Sun Country was able to retain more than half of its 2019 operating revenue throughout the past year, owing in large part due to a deal to fly cargo for Amazon. The decline in bookings nonetheless left it with a $4m loss.

Jude Bricker, Sun Country’s chief executive, said that bookings have since climbed back to pre-coronavirus levels.

“We’re feeling really good about where we are and investors share that enthusiasm,” Bricker said. The IPO, he added, “was an opportunity for us. And we took it.”

Sun Country raised a total of $218m in the listing, while leveraged buyout group Apollo agreed to sell $100m of its stake in the airline to BlackRock and PAR Investment Partners.

Together with the $70m Flyr raised through its IPO, the quarter is already shaping out to be the busiest the industry has seen for public market debuts in more than two years. Even if Frontier’s IPO doesn’t land until next month, this would be the first quarter with two airlines going public since 2018, according to data from Dealogic.

Public equity markets have been willing to look past the airline industry’s heavy hit from the coronavirus pandemic, banking on a surge in demand for travel once restrictions ease and people are more willing to fly.

Stock prices for big US airlines such as Delta and United have surged more than 60 per cent since the beginning of October. American Airlines, up 96 per cent over the same timeframe, was able to tap debt markets for $10bn last week, the biggest ever deal in the industry.

The boost in airline stocks is part of a larger rotation of investors from some of the pandemic’s big winners such as video conferencing provider Zoom and home-fitness equipment maker Peloton to those companies that can expect a boost out of an accelerating vaccine rollout and the US government stimulus package. 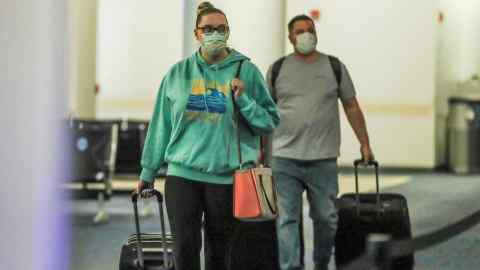 Sun Country’s debut comes on the heels of a wave of private companies rushing to tap public markets, led by several blockbuster IPOs from DoorDash, Lemonade and Airbnb, as well as Roblox and Coupang, which both joined the New York Stock Exchange last week.

“Certainly, tech will continue to play an outsized part in the IPO market as a whole,” said Jeff Bunzel, co-head of equity capital markets at Deutsche Bank. He added, however, that “to the extent that we go back to ‘normal’, whatever that is, it will clearly benefit some of the more traditional businesses.”

Video: Could the pandemic lead to a fairer economy?
[ad_2]
Read More